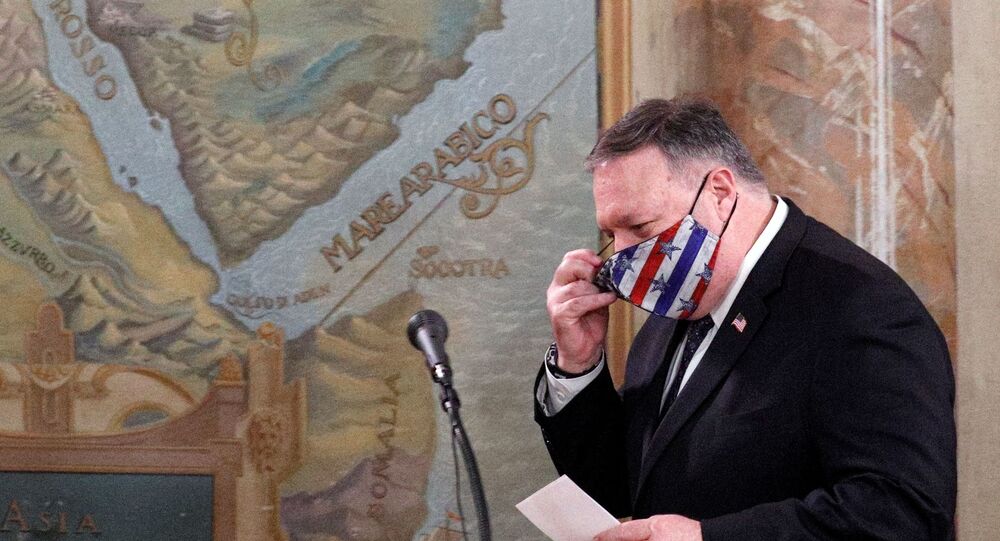 This week, the top US diplomat announced fresh sanctions against four Chinese officials accused of “undermining Hong Kong’s autonomy,” and said that the Trump administration was “not finished yet” in increasing pressure on the Chinese “Marxist-Leninist monster.”

The Global Times, a newspaper which is an offshoot of the Chinese Communist Party-affiliated People’s Daily, has issued a series of fiery op-eds attacking US Secretary of State Mike Pompeo over his “last-ditch efforts to bash China".

The string of attacks followed Pompeo’s remarks on Tuesday at the Reagan Institute’s Center for Freedom and Democracy in Washington, DC in which he attacked the “regime in Beijing” for ruling in a manner that was “authoritarian, brutish and antithetical to human dignity and freedom".

Saying he’d told his Chinese counterparts that they needed to act in an accountable and transparent way to improve ties, Pompeo said “that means no more illegal claims in the South China Sea, no more coercion and co-option of American businesses, no more consulates used as a den of spies, no more stealing of intellectual property, and no more ignoring violations of fundamental human rights.”

Pompeo’s comments prompted Global Times to release half-a-dozen separate op-eds attacking Pompeo for his rhetoric and saying that his “inglorious days as state secretary [are] nearly over.”

“In his latest speech, Pompeo used his most vicious language ever calling the Communist Party of China a ‘Marxist-Leninist monster’. This rare ideologue will soon lose his job as secretary of state, but he is acting as if he can continue to exert influence not just in the US but the world. This behaviour is typical of extremists, who are often obsessed and narcissistic,” Global Times editor-in-chief Hu Xijin wrote in one of the pieces.

“As for Pompeo’s stubborn belief that China’s  political system is bound to end, I’d like to say that socialist China will live as long as people wish for a better life… If Pompeo could live long enough, he would see that the US will cease to be a white-majority country and the ideology he touts today will crumble. History will leave no space for him. Finally, I’d like to say to him: Get ready to go,” Hu added.

Another of the articles gave the Secretary of State a similar dose of invective over his rhetoric, dubbing it “the anti-China loser’s last chance to air his frustration in dealing with China.”

Lu Xiang, a research fellow on US studies at the Chinese Academy of Social Sciences, told the newspaper that Pompeo’s rhetoric was related to his alleged inability to discredit China in the international arena, which he said has become “like a farce to watch".

Zhang Tengjun, another Global Times contributor, accused Pompeo of turning US diplomacy into a “train wreck”, charging him with “completely” ignoring “the basic etiquette and professional ethics of a diplomat,” and of dragging international diplomacy “into a state of instability.”

Zhang warned that since there are still more than 70 days until 20 January when the next president (presumed to be Joe Biden) is sworn in, Pompeo and other outgoing officials might still “show their final madness in policies toward China and the world,” and “take even more drastic moves on the Iran nuclear issue and US’ China policy… sabotaging world diplomacy and creating more obstacles” for Biden.

The Democrat candidate’s secretary of state will have to “make up for the damage done to China-US relations,” according to Zhang, including revoking “some wrong policies” and promoting high-level dialogue.

© REUTERS / Jacquelyn Martin
Trump Administration Sanctions Four Hong Kong Officials Over China’s National Security Law
The Trump administration has engaged in a four-year-long standoff with China on issues ranging from trade and technology transfer to tensions in the South China Sea, Taiwan, Hong Kong and Xinjiang, as well as back-and-forth allegations regarding the coronavirus.

On Saturday, US media pronounced Joe Biden winner of the 2020 presidential election after 99 percent of the ballots in the state of Pennsylvania had been counted. Donald Trump has accused his opponents of “stealing” the election, and has filed election-related lawsuits in states including Pennsylvania, Arizona, Georgia, and Michigan. Senior Democrat personnel, the mainstream media, and some of Trump’s Republican allies have dismissed the fraud allegations, and called on Trump to concede the vote and to stop “undermining” trust in America’s democracy.