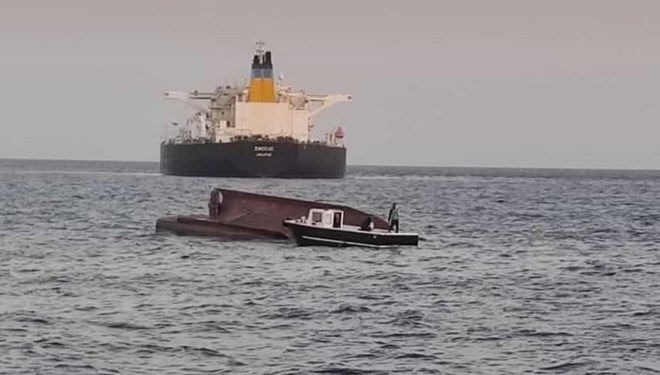 The incident took place amid ongoing tensions between Athens and Ankara in the Mediterranean related to a gas drilling dispute in an area claimed by both countries.

Four people are confirmed dead and one remains missing following a collision involving the Ephesos, a Greek-flagged tanker, and the Polatbey 1, a Turkish fishing boat, officials from the Turkish province of Adana have said.

The incident reportedly place at about 5:50 am local time on Wednesday morning, about 15 nautical miles off Karatas district in southern Turkey. Its precise cause has yet to be determined. The area where the accident took place is also situated about 40 nautical miles from the Turkish-Syrian border, and less than 50 nautical miles from Cyprus.

Turkey’s coast guard launched a three-vessel search-and-rescue operation including a dive team to find the Turkish sailors; the boat is said to have capsized and sank after colliding with the Greek ship. The crew of the Greek ship is also said to have provided assistance. Turkish officials say four bodies have been retrieved, with one fisherman still missing.

4 dead, 1 missing as tanker collides with fishing boat in southern #Turkey
Sources say 4 fishermen have died after a Greek-flagged crude oil #tanker collided with a Turkish fishing boat -reportedly the Polatbey 1- near Mersin this morning. At least 1 crew member is still missing. pic.twitter.com/WEiSW8Ag9v

Amateur footage from the scene of the accident obtained by Turkish media shows the capsized fishing vessel floating in the water, with the tanker anchored nearby as coast guard workers call out in vain in hopes of finding survivors after boarding the trawler.

According to online maritime traffic resources, the Ephesos tanker was on route from Ceyhan, Turkey to Vietnam, and is carrying about 140,000 metric tonnes of oil.

The accident comes amid ongoing tensions between Turkey and Greece over gas drilling rights in the eastern Mediterranean Sea. Authorities in Ankara have repeatedly stressed that Turkey’s Oruc Reis surveying ship would continue the seismic surveying operations in a contested sea area which it began in August, issuing another Navtex message for ships in the area earlier this month. Greece has blasted Turkey’s “illegal seismic surveys” “within the Greek continental shelf”, and accused Ankara of systematically violating international law. Turkey has countered and said it would continue its drilling activities in what it says are its waters.

© AP Photo / Ismail Coskun
Greece Concerned by Arms Supply to Turkey, Ankara’s ‘Expansionist’ Ambitions, Foreign Minister Says
The gas drilling-related dispute has led to an escalation of tensions between the NATO allies, including an increased presence of warships in the disputed area. Ankara proceeded with the search for gas in August, after Greece and Egypt signed a maritime agreement dividing large swathes of the Mediterranean between them into exclusive economic zones. Turkey and the Ankara-backed government in western Libya signed a similar agreement in late 2019.
...
Reddit
Google+
Blogger
Pinterest
StumbleUpon
Telegram
WhatsApp
12