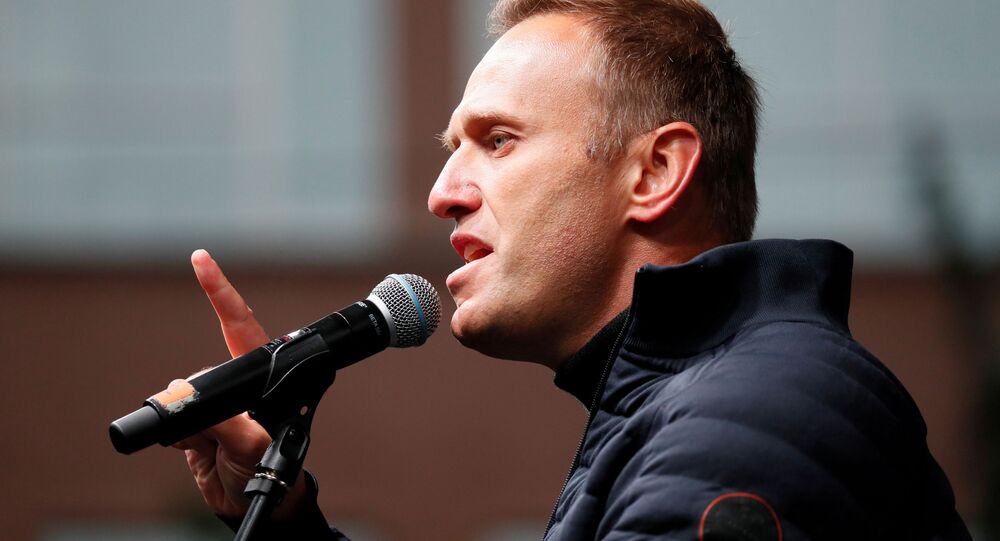 The European Union slapped sanctions on high-ranking Russian officials as well as several research institutes in October over the alleged poisoning of Russian opposition figure Alexei Navalny. Moscow has pledged to respond with its own reciprocal measures.

The Russian Foreign Ministry has made several comments on the opposition figure Alexei Navalny's case, saying that the entire situation has been orchestrated to impose new sanctions on Russia.

The Organisation for Prohibition of Chemical Weapons (OPCW) leadership is politically biased, the foreign ministry said.

"Any outside observer, who does not know much about chemistry and chemical weapons non-proliferation, would naturally assume that all that is happening is a set-up by a non-professional trying to impose sanctions on Russia, which remains committed to not accepting any rules which are forced on it and are against its sovereignty, international law and common sense," the ministry said.

According to the ministry, in response to its numerous questions about what was happening with Navalny, all requests were always directed from the OPCW to Berlin, Paris and Stockholm, and vice versa. Only after a month — on 6 October —the OPCW Technical Secretariat announced that two laboratories certified by the organisation had found cholinesterase inhibitor biomarkers in Navalny's blood and urine.

This substance's structural characteristics are similar to toxic chemicals listed in the Annex on Chemicals to the Chemical Weapons Convention. This cholinesterase inhibitor itself is not included in the annex, the ministry recalled.

"On 16 October, with Berlin's permission, the OPCW distributed a report, in which all chemical formulas that could help clarify the biochemical nature of Navalny's alleged poisoning were carefully erased," the ministry said.

The Russian Foreign Ministry also noted that it would take experienced specialists at least two weeks to conduct detailed tests for the presence of this kind of substance. Meanwhile, German military chemists, who used to claim they had no knowledge about the structure of Novichok nerve agent, confirmed in nine days that they’d found traces of the substance.

"It is also quite revealing that right after Germany, 'breakthrough' achievements in the field of combat chemistry were demonstrated by France and Sweden, whose military laboratories began to study biological samples transferred to them by their German colleagues as recently as 4 September. It took them no more than 10 days to do this, and on 14 September, they announced results similar to the results of German military chemists. And this despite the fact that one or two years ago, both publicly 'swore' that they did not have sufficient expertise to synthesise Novichok," the ministry added.

Moscow expects Berlin to comply with the international law and begin cooperating on Navalny's case with Russia, according to the ministry.

Russia hopes that Germany will not make this case artificially political, as it harms the bilateral relationship, spokeswoman for the Russian Foreign Ministry Maria Zakharova said.

The statement comes an hour after the office of the Russian Prosecutor General said it received a response from Germany on Alexei Navalny. However, "none of Russia's questions received substantial answers", according to the office's spokesman.

Russia has repeated its request for more information about the substance that was allegedly found in Navalny's tests. Without Germany's explanations, Russia remains unable to draw any definitive conclusions on the situation, as there were no traces of any poisonous substance in Navalny's samples taken during the hospitalisation in Russia, the prosecutors said.

According to the Siberian Bureau of the transport department of the Rusian Interior Ministry, Navalny was diagnosed with acute pancreatitis, after his wife told Russian doctors he may have felt unwell due to dieting.

"Navalny's wife told doctors that her husband had been restricting his food intake, and had experienced discomfort after meals for 3-5 days, and did not eat regularly. The wife also suggested that the patient's diets with the goal of losing weight may have caused him to feel ill", the bureau said.

Prior to this, the European Union imposed sanctions on six Russian citizens, including Director of the Federal Security Service Alexander Bortnikov. Russian Foreign Minister Sergei Lavrov responded by saying that the EU was acting unacceptably and that Moscow could discontinue its dialogue with Brussels.

© Sputnik / Alexander Vilf
If Russia Wanted to Poison Navalny Would Never Let Him Cross Into Germany - Putin
On 20 August, Navalny fell ill on a domestic flight in Russia. He was initially treated in the Siberian city of Omsk, where his plane made an emergency landing. Two days later, when the doctors determined that he was fit for cross-border aerial transportation, the politician was taken to the Berlin-based Charite hospital for further treatment.

In a statement, the German government said that doctors had found evidence of a poisonous nerve agent from the Novichok group in Navalny's body. Russia disputed these allegations, noting that its doctors had found no toxic substances in Navalny while he was treated in Omsk.