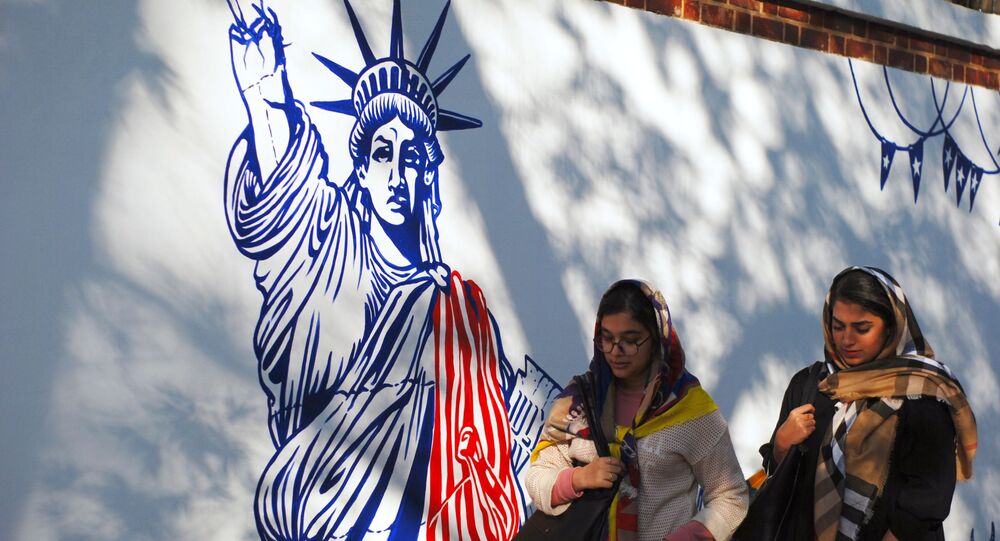 ‘What a Spectacle!’ Iran’s Khamenei Rips US-Style Democracy in Wake of Presidential Election

Earlier, Iran’s head of state indicated that the outcome of the race wouldn’t affect the Islamic Republic’s policy toward Washington. Foreign Minister Mohammad Javad Zarif, meanwhile, has indicated that relations between Iran and the US would improve “no matter who sits in the White House” if America stops “its malign behaviour”.

“What a spectacle! One says this is the most fraudulent election in US history. Who says that? The president who is currently in office. His rival says Trump intends to rig the election! This is how #USElections and US democracy are,” the message, published on Khamenei’s official account, noted.

What a spectacle! One says this is the most fraudulent election in US history. Who says that? The president who is currently in office. His rival says Trump intends to rig the election! This is how #USElections & US democracy are.

Khamenei’s tweet followed his remarks in a televised address to the nation on Tuesday, where he blasted “the US regime” for its “severe political, civil and moral deviations”, and suggested that “such a regime won’t last long”.

“Of course, if certain people hold office, they speed up its destruction, whereas with others it may take a little longer,” Khamenei said in the earlier remarks, adding that Iran’s “calculated and clear” policy toward the US wouldn’t change no matter who was in charge in Washington.

US is severely suffering from decline. US writers say this. Books have been written over the past years exposing this!
I read the Persian translation of one of them. It’s full of evidence of #USdecline. The whole book shows the US political system’s decline via POTUS’ acts. pic.twitter.com/zMDZkzzQFp

Khamenei’s Twitter trolling of Trump followed in the wake of a series of tweets by the US president Wednesday in which he accused his Democratic opponents of “trying to steal the election,” and pointed to “very strange” circumstances in key battleground states where his solid early leads “magically disappeared”  after “surprise ballot dumps were counted..

The Iranian head of state’s tweet led to a flood of comments, retweets and likes, with the reactions quickly degenerating into a raging debate about which countries have the moral authority to criticize others for supposed flaws in their political systems.

The situation in US couldn't be described better. The joke is that they want to rule the whole world 😅

There is elections in Iran, the president and the parliament are elected directly by the peoples for several years mandate 😉

Election isn't the real sign of a democracy.
The real sign is assimilation of a country's people into each other and becoming one.
Unless that happens, democracy wouldn't work and it would only mean some people stealing the rights of others, just because they have one vote more.

Iran, whose relations with the US sunk to near historic lows under President Trump, has taken a wait and see approach to the presidential election.

On Monday, Foreign Minister Mohammad Javad Zarif told US media that the “statements made by the Biden camp” toward Iran “have been more promising,” but rejected the former vice president’s proposal to “renegotiate” the 2015 Iran nuclear deal, which Trump withdrew from in 2018. “We can find a way to reengage, obviously. But reengagement does not mean renegotiation. It means the US coming back to the negotiating table,” he said.

© AP Photo / Ebrahim Noroozi
IRGC Weighs in on US Vote, Says ‘US Hostility Toward Iran’ Unchanging Whether GOP, Dems in Office
Iran’s powerful Islamic Revolutionary Guard Corps, meanwhile, issued a statement saying both Republican and Democratic presidents have acted with “arrogance and hostility” toward Tehran for many decades, starting with the 1953 CIA-backed coup d’etat against democratically elected government of Prime Minister Mohammed Mossadegh.

The Trump administration unilaterally withdrew from the 2015 Iran nuclear deal in May 2018, slapping Iran with tough sanctions. Since then, the two countries have repeatedly stepped back from the brink of open warfare, with the US’s deployment of a carrier strike group to the Persian Gulf region in 2019 culminating in the shootdown of a US spy drone over Iranian air space in the Strait of Hormuz. In January 2020, Washington assassinated Qasem Soleimani, one of Iran’s most respected generals, in a drone strike in Baghdad, with Tehran responding with missile strikes on two US bases in Iraq. Hostilities were ratcheted up again in April 2020, when the US threatened to blow small Iranian gunboats harassing American warships off Iran’s shores out of the water.

Following Tuesday’s election, US media reported that the United States launched a series of ‘preventative’ cyberattacks against Iran, as well as Russia, ostensibly to stop “attempts to meddle” in the vote by the two countries. The attacks followed weeks of claims, denied by both nations, accusing Tehran and Moscow of seeking to interfere in the US vote via online intimidation and trolling campaigns.