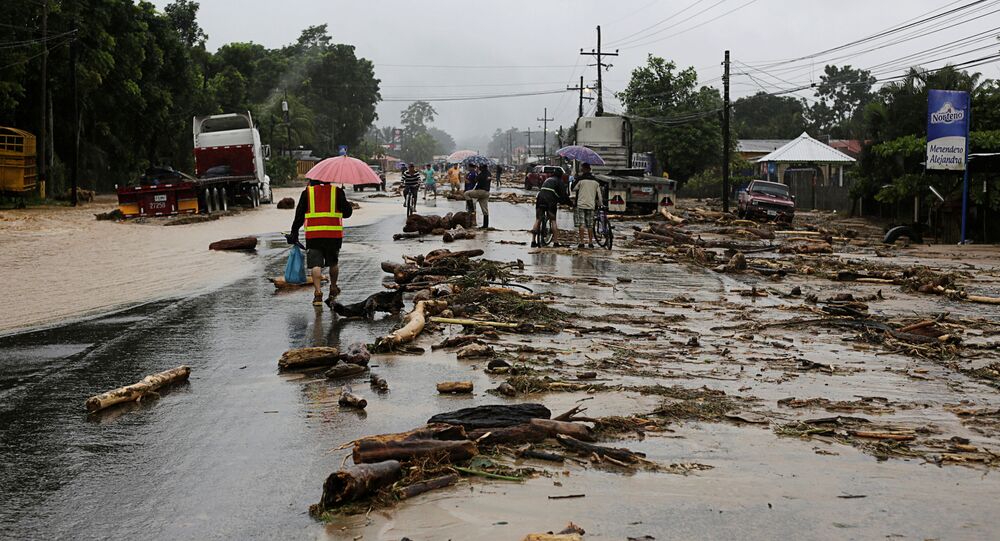 The Category 4 out of 5 hurricane, which has by now slimmed down to a tropical cyclone and left Nicaragua, is expected to cross Honduras before regaining strength and heading to Cuba.

According to the VOS TV broadcaster, two people — illegal mineworkers — died in the mountainous region of Bonanza when their mine got buried under a landslide.

Flooding issues continue to worsen in parts of Honduras 🇭🇳 as remnants of Hurricane #Eta slowly move through the country.

This is from La Lima in the north of the country.pic.twitter.com/vmkIbXwYcz

​The Nicaraguan authorities have not yet officially confirmed the casualties, saying that they are underway assessing the total damage before possibly applying for international assistance.

© AP Photo / Carlos Herrera
Videos: Hurricane Eta Pummels Honduras, Nicaragua With Severe Rainfall, Kills at Least 3
A sailor was washed away into the sea in El Salvador, according to the country's Civil Protection Service. The man ignored the government's warning to refrain from fishing during a storm, it was reported. The authorities prepared food and medicines for 662 shelters in the case of floods in fragile areas.

In Honduras, media reported four people killed, including three by drowning and one as a result of a landslide.

The Honduran government declared a state of emergency and indefinite high alert because of the heavy precipitation caused by Eta. Population in lowlands and dangerous locations were told to prepare 72-hour backpacks. Security protocols were implemented in 1,200 shelters.