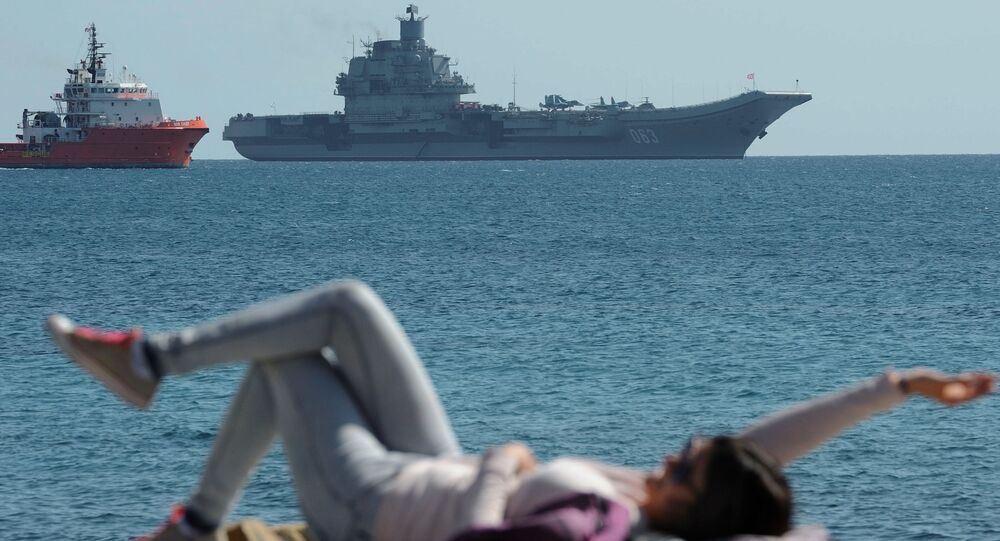 US Demands That Cyprus Cut Off Port Access to Russian Warships

Moscow and Nicosia signed an agreement in early 2015 allowing for Russian warships to access the Mediterranean island nation’s port facilities to help facilitate counterterrorism and anti-piracy efforts. The US announced a partial lifting of its decades-old arms embargo against Cyprus in September amid a spike in regional tensions.

The United States remains unsatisfied over the fact that Cyprus continues to allow Russian warships to use its ports, and will maintain pressure on the country to deny such port access, R. Clarke Cooper, assistant secretary of state for political-military affairs, has said.

“I did specifically note that Cyprus has not yet taken the steps necessary to deny port access to Russian naval vessels,” Cooper said, referring to his visit to Nicosia last month for talks with Cypriot officials. “We certainly want the Republic of Cyprus to pursue in this direction. This would also enable us to further continued access to [International Traffic in Arms Regulations]-controlled defence articles,” the diplomat added.

Cooper stressed that although the US had lifted the arms embargo for non-lethal defence articles, and had “opened up the opportunity for education and training…for us to go further with the Republic of Cyprus, we do need to see further assurances on their ability to deny port access to Russian naval vessels. Those were very honest conversations.”

The Republic of Cyprus is a key partner in the Eastern Mediterranean. I am pleased to announce that we are deepening our security cooperation. We will waive restrictions on the sale of non-lethal defense articles and services to the Republic of Cyprus for the coming fiscal year.

He added that moving forward, the US expects for Cyprus to take on a greater role in the Eastern Mediterranean and to “take on greater responsibilities that are supportive of the European Union as well as NATO requirements,” with the “portage issue” being one of assuring interoperability with the Western alliance.

Russia and Cyprus cemented a port access deal in February 2015, allowing Russian Navy warships involved in counter-terrorism and anti-piracy operations in the region to visit the country’s ports. Commenting on the deal, Russian President Vladimir Putin assured that other countries have no cause for concern, and that “our friendly ties aren’t aimed against anyone.”

In mid-2019, Nicosia announced that it would continue to provide docking facilities to warships from Russia and other countries despite US pressure, with Defence minister Savvas Angelides emphasizing that “no country can impose on Cyprus an obligation to stop providing facilities to Russian or other ships.” Washington has repeatedly called on Nicosia to end the hosting of Russian ships, and accused these vessels of contributing to “destabilizing actions” in Syria.

© AP Photo / Baderkhan Ahmad
Russian Servicemen Killed Over 133,000 Militants in Syria, Defence Minister Says
Russia launched a counter-terrorism operation in Syria in late September 2015, helping the Syrian government to eliminate tens of thousands of terrorists, many of them hailing from other countries. In late September, Defence Minister Sergei Shoigu announced that Russian forces had eliminated over 133,000 militants and some 865 terrorist leaders over the past five years.

In his remarks, Cooper also addressed the recent escalation of tensions between NATO members Greece and Turkey over gas drilling rights in the Eastern Mediterranean, saying Washington has sought to discourage “any provocational [sic] behaviour” by Ankara, and doesn’t “abide by any provocations from Ankara to allies and partners.”

Cyprus is involved in that drilling dispute, and has joined Greece and France in challenging Turkey’s maritime claims.

Tensions between Greece and Turkey escalated sharply in August after a Turkish surveying vessel started searching for gas in a maritime area cleaimed by Greece. Ankara sent the ship to the area shortly after Greece and Egypt signed a maritime agreement dividing large swathes of the Mediterranean between them into exclusive economic zones. The Greek-Egyptian agreement followed the signature of a similar treaty by Turkey and the Ankara-backed government in western Libya in late 2019, with that treaty also making an EEZ claim to large swathes of the Mediterranean.

© AP Photo / Burhan Ozbilici
Russia Urges Greece, Turkey to Defuse Tensions in East Med, Is Ready to Help, Lavrov Says
The assistant secretary also reiterated that Washington considers Ankara’s purchase of Russia’s S-400 air defence systems as “unacceptable,” and something that “runs the risk of sanctions.” He noted that the US has continued to communicate with Turkey to try to prevent the S-400s from being activated. “This does become a challenge when we talk about interoperability between Turkey and the United States, but also interoperability within the NATO alliance,” he said.
...
Reddit
Google+
Blogger
Pinterest
StumbleUpon
Telegram
WhatsApp
8101