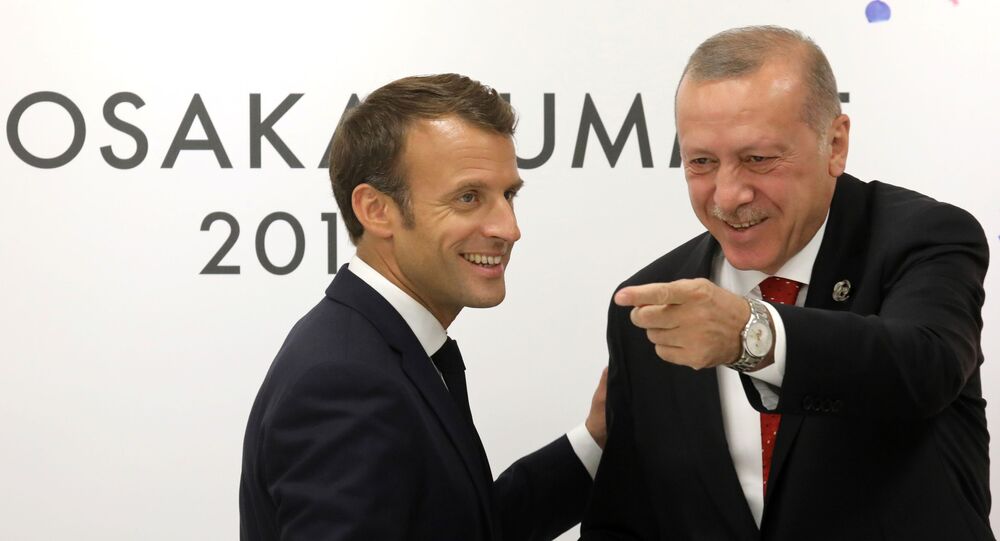 France and Turkey: Caught Between Today’s Confrontation and Former Alliance

For several decades, France has been a "target" of terrorism, especially Islamist. A confrontation with Turkey has now been added to this, forming a truly "explosive mixture".

In February 2006, when Danish flags were burning after the country's largest newspaper, Jyllands-Posten, launched a journalistic experiment by publishing cartoons of the Prophet Muhammad, an international debate started. Which is more important: freedom of speech or religious feelings? In 2020, we haven't come much further in this debate, while the list of terrorist attacks related to this topic has become significantly longer.

The most recent addition to the list is the murder and beheading of French history teacher Samuel Paty, who used cartoons from a French satirical magazine whose editorial team was the target of a bloody attack, in class to discuss freedom of speech with his students.

CHARLES PLATIAU
People gather at the Place de la Republique in Paris, to pay tribute to Samuel Paty, the French teacher who was beheaded on the streets of the Paris suburb of Conflans-Sainte-Honorine, France, October 18, 2020. Placard reads "I am a teacher". REUTERS/Charles Platiau

This murder has affected French society even more than the pandemic and quarantine. During the ceremony in honour of the victim, President Emmanuel Macron made himself very clear: "This is an attack on the Republic".

Macron knows that the majority of French people support him when he constantly speaks of the republican values ​​that were at the heart of the French Revolution of 1789. France is committed to protecting secular traditions. However, laicism, the rigid separation of politics and religion, recorded in laws since 1905, is a French feature that the country has "exported" to other regions of the world.

France and the Alliance With the Ottoman Empire

The Republic of Turkey, founded by Kemal Ataturk in 1923, was a country that had also consolidated this laicism, both at the legislative level and in its public policy. What an ironic twist of fate: these two countries are now arguing. When the national-religious Justice and Development Party under Recep T. Erdogan came to power, there was a change in national politics, law, and society.

For almost 15 years, President Erdogan has consistently focused on issues such as the protection of Muslims worldwide, be it the Turkish diaspora in Europe, to which he is saying they are the successors of the glorious Ottomans and not the children of migrant workers, or be it the Palestinian issue.

© AP Photo / Lefteris Pitarakis
Turkish soldiers, musicians and performers wearing Ottoman-era uniforms perform in Istanbul, Turkey, Saturday, May 30, 2015 during a rally to commemorate the anniversary of city's conquest by the Ottoman Turks

Massive support from the Muslim Brotherhood links Turkey with the wealthy Emirate of Qatar, at the same time creating a deep chasm with Saudi Arabia and Egypt. For its part, France has also relied on close ties with Qatar over the past few decades, with the main focus being on arms sales. Now Turkey is calling for a boycott of French goods, which applies, in particular, to supermarkets in Qatar.

In the 17-18th centuries, there was a close alliance between France and the Ottomans. At that time, they had a common enemy, the Habsburg Empire. The Turks were supported by the Bourbons during the Siege of Vienna.

Vienna waged a war on two fronts, in the east against the superior Ottoman armies, and in the west against the French. Prince Eugene of Savoy, exiled from Paris, succeeded in a real military miracle to deal with those two wars.

With Paris having recalled its ambassador from Ankara after Erdogan's harsh verbal attacks, one can say that the bilateral relations between the two states have hit rock bottom. In response to Macron's defence of the anti-Islamic cartoons, Erdogan advised him to "see a psychiatrist".

Such verbal attacks are unworthy and truly unjustifiable. But if one reduces diplomacy to a mathematical formula, it would be: diplomacy = dialogue at any cost. When Russian Ambassador to Turkey Andrei Karlov was killed in December 2016 by his Turkish bodyguard, who shouted "Allahu Akbar", Moscow didn't break its diplomatic relations with Ankara.

This is a very remarkable difference in dealing with an extremely complex dossier. If emotions prevail between Paris and Ankara, with each side insisting on its former role in accordance with its own sovereign policy, and the Mediterranean Sea, like 400 years ago, remains the arena of fierce discussion, something is wrong.

France and Turkey are taking a tough course of the collision, whether in Libya or Syria, or now in Nagorno-Karabakh. Perhaps this confrontation is so fierce because, historically, one can see a symmetry in each side's self-image: France believes that the 1789 revolution substantiated the universalism of certain values.

The triad "liberty, equality, fraternity" was undoubtedly the slogan of all subsequent revolutions. But the world has changed, not only in the last 300 years, but also in the last 30.

On the other hand there is Turkey, where the caliphs were the spiritual leaders of the Sunni Muslim world for almost 450 years. Erdogan regularly makes these claims to leadership, but there is also a deep chasm between the Arab Muslim world on the one hand, and the Turkish world on the other. After all, no one has forgotten the centuries of Ottoman occupation.

Respect for Each Other

Paris and Ankara should bury the hatchet and try to resolve their numerous conflicts diplomatically while considering mutual interests. Right after the brutal terrorist attack on a church in Nice, Turkey expressed condolences to France.

Turkey has now been hit by a devastating earthquake. May it receive aid proposals, whether in the form of rescue dogs or in any other form; and may the Turkish authorities accept this help. We know that such gestures can help overcome numerous "barriers".

Indeed, instead of proceeding on their confrontational course, the parties should change their tone at all levels and show more respect for each other: both parties would benefit from this. The pandemic and its dire economic consequences have hit us all.

With lockdowns introduced in some places and small businesses struggling to survive, it's not cartoons or religiously-driven blind violence that should be at the forefront. All of our societies are under enormous pressure, and civil rights are being curtailed everywhere. What both France and Turkey should now focus on is not the past and their former greatness, but something bigger.