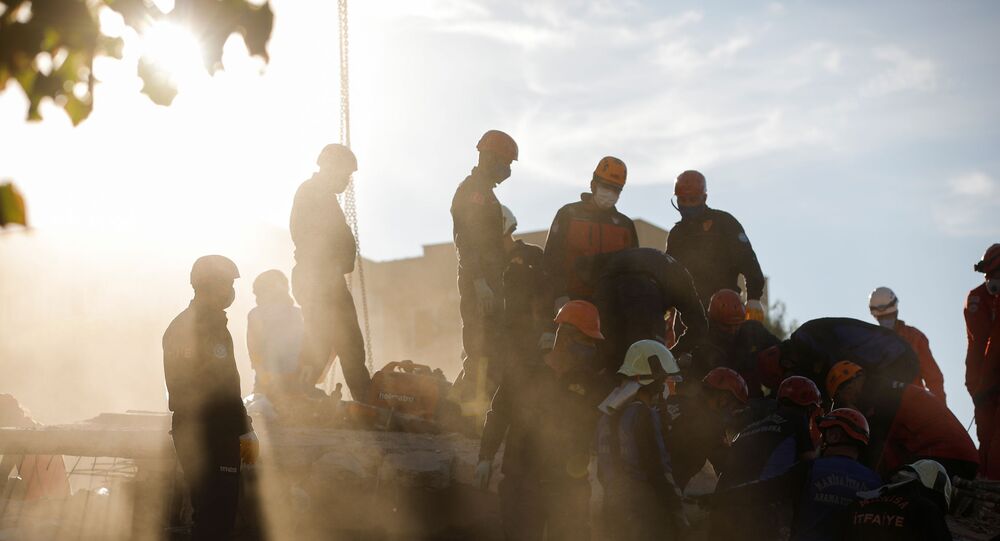 Death Toll From Earthquake in Western Turkey Rises to 69

ANKARA (Sputnik) - The death toll from the earthquake in western Turkey has increased to 69 people, while the number of those injured has increased to 940, the Turkish Disaster and Emergency Management Presidency (AFAD) announced on Sunday. The number previously stood at 60.

"218 people continue receiving treatment at hospitals", the AFAD said in a statement.

Meanwhile, Environment and Urbanisation Minister Murat Kurum said that more than 40 multi-storey buildings in Izmir have been completely destroyed or have become uninhabitable as a result of the earthquake.

According to the minister, citizens whose houses have become uninhabitable will be paid compensation in the amount of $3,600, while relatives of the victims will receive $1,200.

On Friday, the 6.6 earthquake took place in western Turkey, with its epicentre located in the Aegean Sea near the city of Seferihisar in the Izmir province.

© REUTERS / TUNCAY DERSINLIOGLU
Locals and officials search for survivors at a collapsed building after a strong earthquake struck the Aegean Sea on Friday and was felt in both Greece and Turkey, where some buildings collapsed in the coastal province of Izmir, Turkey, October 30, 2020
The earthquake also affected nearby Greek islands, including Samos, where two people died and 20 were injured. Greek seismologists estimated the earthquake's magnitude at 6.9.
...
Reddit
Google+
Blogger
Pinterest
StumbleUpon
Telegram
WhatsApp
01
Tags:
Turkey, death toll, earthquake, casualties
Community standardsDiscussion