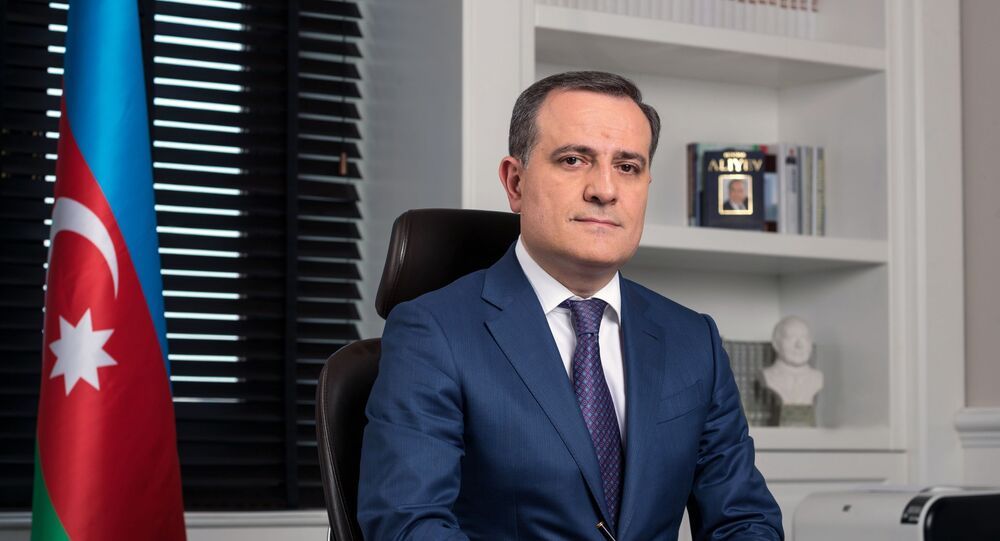 "Turkey’s position on the conflict settlement is based on the norms and principles of international law, including the Helsinki Final Act. Turkey supports the territorial integrity of Azerbaijan within its internationally recognised borders, as a key factor of durable peace, security and stability in the region", the minister said.

He continued by saying that Azerbaijan has intelligence about militants from the Kurdistan Workers' Party (PKK) and Armenian nationals from European and Middle East countries fighting on Armenia’s side in Karabakh.

No Foreign Fighters Helping in Conflict

However, he rejected claims that foreign fighters are helping Azeri forces in the conflict.

"The story of foreign fighters or Syrian militants, as you name them, is a clear case of disinformation spread by some countries. So far, there was not a single [piece of] evidence from those who spread this fake news", the minister noted.

Azerbaijan is fully capable of protecting its interests on its own, the minister added.

"No external forces, including irregular groups, are needed to protect the territorial integrity of our country", Bayramov continued.

According to the foreign minister, Armenia is not interested in finding a political solution to the ongoing hostilities.

"Apparently Armenia is not interested in the negotiated settlement of the conflict. Its Prime Minister [Nikol Pashinyan] clearly stated that there is no diplomatic solution to the conflict. Their ultimate objective is to consolidate the status quo based on occupation", Bayramov said.

French President Emmanuel Macron said in early October that 300 Syrian militants had been sent to Baku via the Turkish city of Gaziantep. Russian Deputy Foreign Minister Mikhail Bogdanov said in mid-October that Russia was raising the issue of foreign mercenaries in Karabakh in its talks with Turkey.

Bayramov further explained that the ceasefire verification mechanism cannot ensure peace in Nagorno-Karabakh, which is only achievable upon the withdrawal of the Armenian forces.

"Ceasefire is not a settlement of the conflict, and no verification mechanisms can replace the durable solution to the conflict. To ensure peace in the region we need to eliminate the fact of occupation. Armenian forces must withdraw from the occupied territories of Azerbaijan, as it was clearly demanded by the respective UNSC resolutions back in 1993", Bayramov said.

Observers in Karabakh Make Sense Only If Armenia Withdraws Troop

He also stated that the presence of military observers in the Karabakh region makes sense only if Armenia commits to withdrawing its forces.

"Establishment of a ceasefire-monitoring mechanism must be synchronised with the settlement process. Otherwise, in the absence of concrete commitment by Armenia on withdrawal of its forces from the occupied territories of Azerbaijan, the monitors would simply serve to consolidate the situation based on the occupation", the minister said.

According to Bayramov, the ceasefire implementation would require "a firm commitment by Armenia to respect its obligations and start withdrawing its armed forces from the Azerbaijani territories".

Iran Could Mediate If Baku, Yerevan Both Approve

Iran’s offer of mediation in the Karabakh conflict is appreciated but should be agreed to by both Baku and Yerevan, Azerbaijani Foreign Minister Jeyhun Bayramov emphasised.

“Currently the negotiations are continuing within the OSCE Minsk group format. Iran is not the member of the Minsk Group and its mediatory mission needs to be agreed by both sides,” the minister said.

Iran has offered its services as a mediator more than once, Bayramov said.

“We highly appreciate these efforts of Iran,” the minister added.

Peacekeepers May Deploy in Nagorno-Karabakh Only If Baku Agrees

Peacekeepers can be deployed in the Karabakh region only if the Azerbaijani government agrees to it, Azerbaijani Foreign Minister Jeyhun Bayramov said.

“Here I must stress again that any deployment of peacekeepers in the sovereign territory of the Republic of Azerbaijan requires consent from the Government of Azerbaijan,” the minister said.

The implementation of UN Security Council Resolutions on Nagorno-Karabakh by Armenia is instrumental in advancing the resolution of the conflict, Bayramov said.

"Now, when the situation on the ground has been changed and Azerbaijan started liberating its territories from military occupation and ensuring the implementation of the related resolutions, Armenia has to comprehend at last that the only way of solving the conflict and achieving peace and prosperity in the region requires adhering to the norms and principles of international law, respecting territorial integrity and inviolability of internationally recognized borders of states, and ending the illegal presence of its forces in the sovereign territories of Azerbaijan," Bayramov said.

The minister specifically cited Resolutions 874 and 884, adopted by the UN Security Council in 1993, which urge for the withdrawal of forces from Azerbaijan’s occupied territories.

“Azerbaijan does not support the idea to expand the conflict context or zone,” Bayramov said when asked to assess the possible involvement of the Collective Security Treaty Organization, to which Armenia is a member, into the conflict in Nagorno-Karabakh.

Accusing the Armenian forces of targeting Azerbaijani territories far from the conflict zone, Bayramov stated that “Armenia is trying to make Azerbaijan return fire and thus bring the third states into the conflict” and that “[Azerbaijan] made it clear that we will not respond to such provocations of Armenia.”

© Sputnik / Aram Nersesyan
Nagorno-Karabakh Live Updates: Azerbaijani Defence Ministry Says Fighting Continued Overnight
Russian Foreign Minister Sergei Lavrov stated on 14 October that Russian military observers should be present in the Nagorno-Karabakh region to ensure the ceasefire on the line of contact is implemented as it was agreed during talks in Moscow, yet the final decision on their deployment should be left with Yerevan and Baku.

Armed hostilities in Nagorno-Karabakh, an Armenian-populated enclave inside Azerbaijan which exercises de facto independence, have been carrying on since 27 September. Three internationally arranged humanitarian ceasefires have been announced since then, but the warring sides have accused each other of breaching all three, minutes after they took effect.