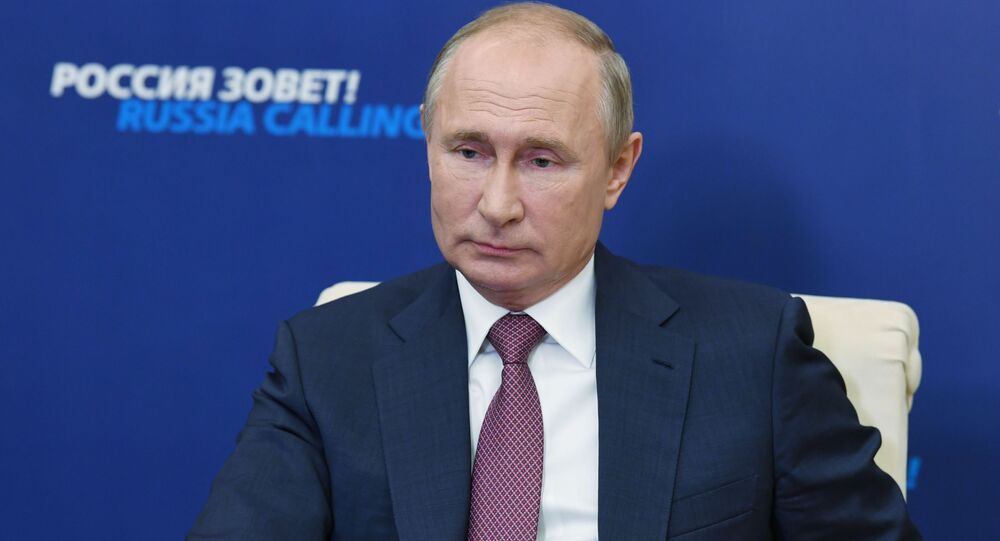 Putin on US Election: No Matter What I Say Partners Will Accuse Us of Meddling

MOSCOW (Sputnik) - Russian President Vladimir Putin on Thursday said that he would rather not make comments regarding the upcoming presidential election in the United States to not give reasons to blame Russia for interfering in Washington's affairs.

"I would not like to comment on the topic of the US election, because no matter what I say, some of our partners will cling to anything in order to prove Russia's alleged interference in the election in the United States," Putin said at the Russia Calling! investment forum, organized by VTB Capital.

The Russian president also said that Moscow was unaware of what policies would democrats and republicans pursue after the November 3 election.

Putin added that Russia would be able to cope with any outcome of the US election.

"We are still confident that we will cope with any developments … We will accept any decision of the American people and will work with any administration," Putin said.

The election, in which US President Donald Trump is facing off Democratic nominee Joe Biden, is set for November 3. Early voting has already started in some states.

The US has accused Russia of meddling in America’s 2016 presidential elections. Similar claims were later made by other western countries, including France, the UK, Spain and Germany, but subsequent probes conducted by respective authorities have failed to find proof that such meddling actually took place.

© AP Photo / Ronald Zak
US Treasury Sanctions Five Iranian Entities Over Alleged Meddling in 2020 Election
Russia has persistently denied these accusations since day one, indicating that "Russian meddling" has become a universal excuse for governments, performing poorly in elections that came out of the wave of increased interest towards right-wing parties.

Russian President Vladimir Putin, in his turn, has further dismissed the accusations of meddling, noting that the US is not some kind of "banana republic" to be easily meddled with by an external power.