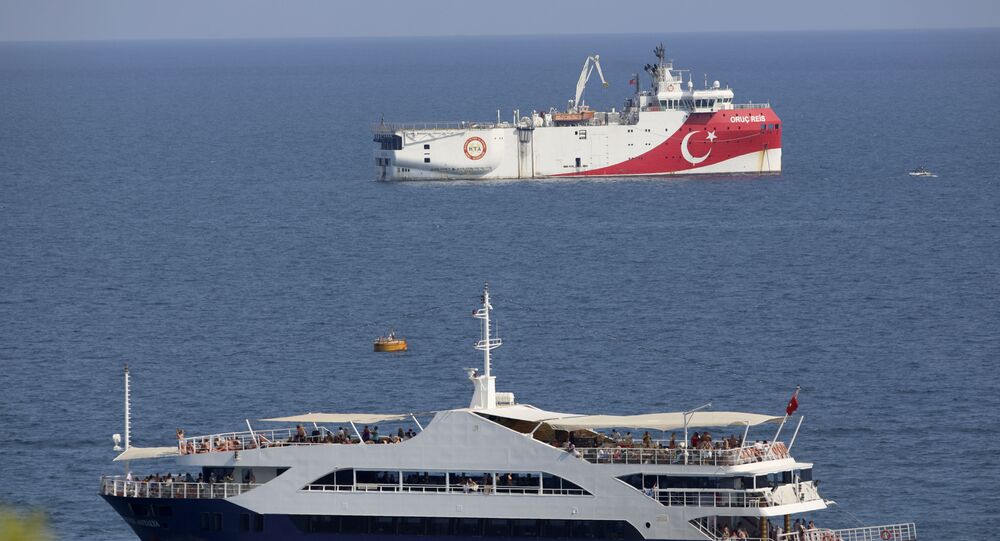 Tensions between the two countries escalated in August, when the Greek Foreign Ministry urged Turkey to stop its "illegal" drilling activities in the eastern Mediterranean immediately, warning that Athens will defend itself if needed.

Russia calls on Greece and Turkey to take measures as soon as possible to defuse tensions in the Eastern Mediterranean and is ready to become a mediator in resolving the crisis if the parties show interest in this, Russian Foreign Minister Sergey Lavrov said on Monday.

"It is necessary to take measures as soon as possible to defuse tensions and move to the settlement of all problems arising here — and there are many of them — via negotiations directly between the parties concerned. This also applies to issues that are governed by the 1982 Convention on the Law of the Sea, including issues where the rights of neighbouring states intersect and demand a negotiated solution via direct dialogue," Lavrov said at a meeting with Greek Prime Minister Kyriakos Mitsotakis.

The minister noted that Moscow had stable and good relations with the countries in the region.

"If there is the will and interest of our partners, we will be ready to help in every possible way to normalize the situation here," Lavrov added.

Relations between Greece and Turkey deteriorated in August after Athens demanded that Turkey immediately stop its "illegal" drilling activities in the eastern Mediterranean. This came after the Turkish research vessel Oruc Reis launched a seismic survey in a disputed zone of the Mediterranean Sea to the south of Antalya and to the west of Cyprus.

In response to Greece's criticism, Turkey said that Athens had itself violated Ankara's continental shelf rights by reaching a deal with Egypt on the creation of an exclusive economic zone.

After facing pressure from the international community over its gas exploration activities in the eastern Mediterranean, Turkey returned the Oruc Reis ship to its shores in the middle of September. However, later it sent the vessel back to the area of research again just to be denounced by Greece for endangering regional security.