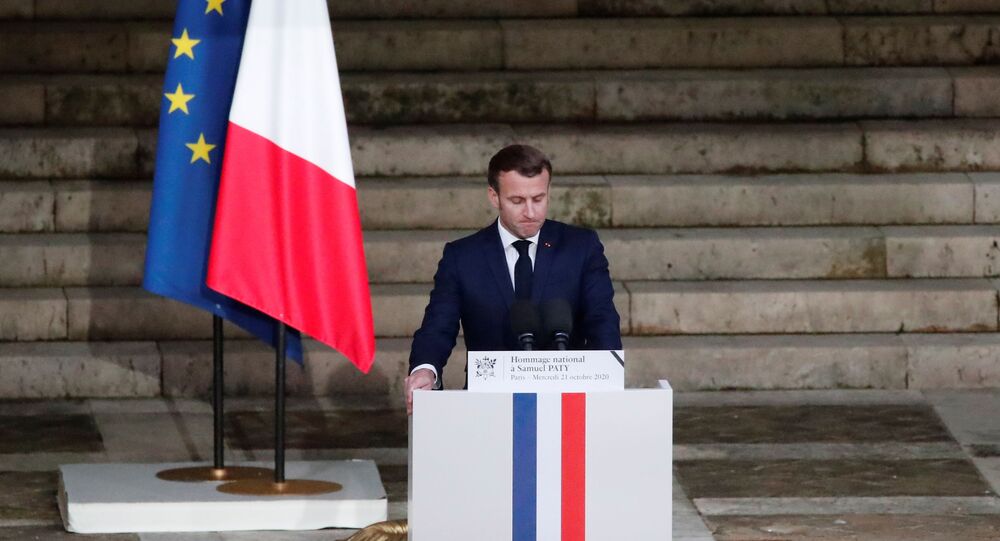 Authorities insist there is no disharmony between moderate Islam and French values. They instead fault communitarianism, an inward-looking view of society that is often linked to conservative Islam. The French government has introduced bans on religious symbols in public schools and offices and outlawed full-body Islamic swimsuits, or burkinis.

The French foreign ministry has urged Arab governments to speak out against calls for a boycott of French goods in order to help French companies and ensure the safety of its citizens.

"The calls for boycotting are therefore completely groundless and must stop immediately, along with any attacks directed against our country, which are exploited by a radical minority," it said in a statement.

Calls for boycotts of French products are growing in the Muslim world since French president Emmanuel Macron vowed “not to give up caricatures and cartoons” last week after the October 16 beheading of a history teacher, Samuel Paty, who had shown cartoons of the Prophet Mohamed to pupils in a class discussion on free speech.

Macron has vowed to take the fight to Islamic radicals. In a recent speech, he insisted “no concessions” would be made in a new drive to push religion out of education and the public sector in France.

“Islam is a religion that is in crisis all over the world today, we are not just seeing this in our country,” he said.

He announced that the government would present a bill in December to strengthen a 1905 law that officially separates religion from the state.

Macron also shut down the Collective Against Islamophobia in France (CCIF), an NGO that tracks anti-Muslim hate crimes in France and closed a mosque outside Paris as part of a crackdown on radical teaching.

But his comments triggered protests and boycotts of French goods are underway. In Qatar and Kuwait, dozens of shops removed French food products, such as Kiri and Babybel cheese, from sale at the weekend. Qatar University said it was postponing French Cultural Week indefinitely. In the Arab Israeli town of Jaffa, near Tel Aviv, some 200 people protested outside the French ambassador’s residence.

"We see Macron's anti-Islamic insults and racist terrorism as a threat to our national security and this is what we are guided by when we draft our plans", Erdogan said, adding that Turkey will take responsive measures, if necessary.

"[France is] indeed part of Nazism. The person who is leading France and who needs psychiatric treatment has started encouraging attacks on Muslims", Erdogan added.

Jean-Yves Le Drian, the foreign minister earlier accused Erdogan of “trying to whip up hatred” of France. He also expressed disappointment at Turkey’s failure to condemn Paty’s killing or express solidarity with France.

In recent months, France and Turkey, both NATO members, have been at loggerheads over a range of issues including oil and gas exploration in the eastern Mediterranean, conflicts in Libya and Syria, and fighting between Armenia and Azerbaijan over the disputed Nagorno-Karabakh region.

The Turkish President’s head of media and communications Fahrettin Altun, tweeted in English that “offensive caricatures” of the prophet Muhammad were not a legitimate exercise of freedom of expression. “It’s about intimidating and reminding Muslims that they are welcome to keep the European economy going, but they will never belong - against the backdrop of lectures about integration.

The move against the boycott was backed by France's largest employers' federation MEDEF which called on Monday for companies to "resist the blackmail" over a product boycott by Islamic countries.