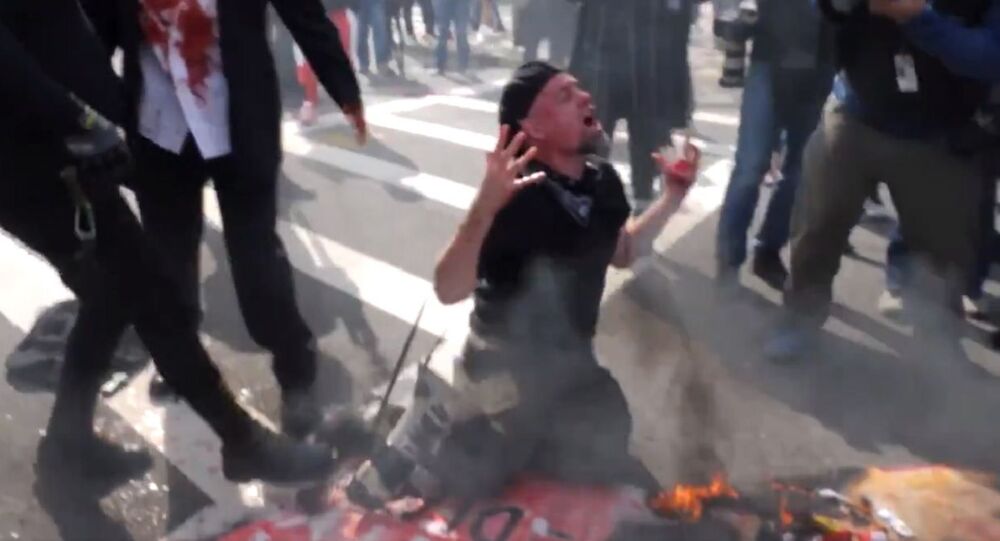 Pro- and anti-Trump protesters briefly clashed on Sunday in Boston, even though they were separated by metal barriers and police barricades.

In a symbolic protest, Antifa demonstrators in Boston, Massachusetts were seen eating "the heart of US President Donald Trump" while chanting “Kali Maa”, the name of a Hindu goddess.

The video of the bizarre act has been going viral on social media as the protesters burned US flags and symbolically squeezed "blood" out of "the heart" while also chanting "f**k Trump".

Antifa burn the US flag and eat a heart symbolic of the President during an anti-democrat violence protest in #Boston #Massachusetts on 10.18.2020 pic.twitter.com/eLdOW8YNyg

Several enraged Hindus took to the comment section on Twitter, slamming the act and explained the meaning of Hindu goddess Kali.

According to Hindu religion, goddess Kali is the incarnation of Parvati, wife of the great god Shiva. She is often referred to as a destroyer of evil.

Against the backdrop of the election campaign, supporters of President Donald Trump often clash with anti-government and Antifa activists. On Saturday, Trump supporters clashed with the Black Lives Matter and Antifa activists outside the United Nations Plaza in San Francisco over Twitter censorship. Donald Trump promised in May that “the United States of America will be designating ANTIFA as a Terrorist Organisation”.