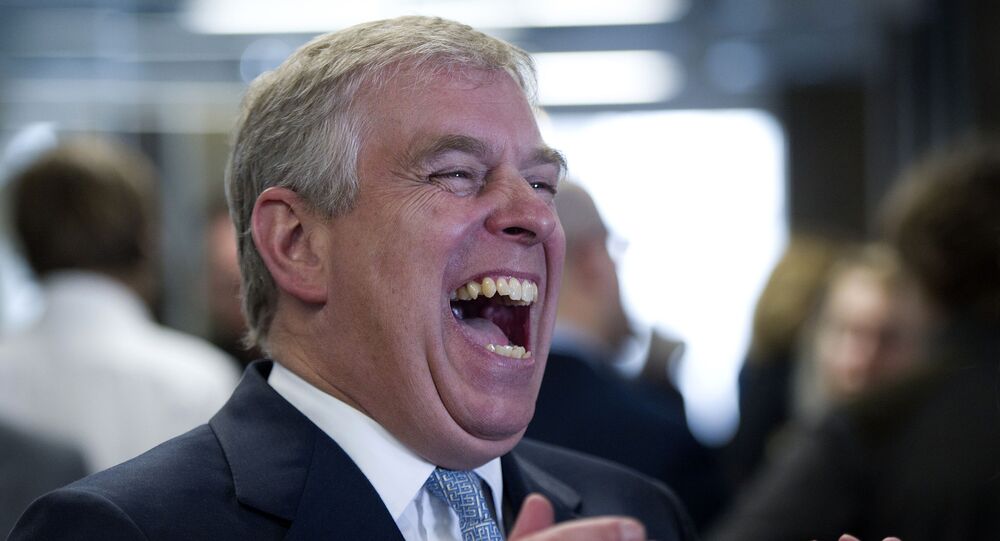 New allegations against Prince Andrew are contained in “The Spider”, a new book by Pulitzer Prize–nominated journalist Barry Levine, that promises to shed light on the grisly aspects of disgraced financier Jeffrey Epstein’s sex trafficking network and the role played by some of his alleged accomplices in drawing teen victims into their web.

Prince Andrew reportedly sat back, laughing, as a bevy of topless girls including an alleged teen sex trafficking victim participated in a topless photoshoot at convicted pedophile Jeffrey Epstein's Virgin Islands hideaway, according to a revealing new book cited by The Sun.

According to an early copy of “The Spider”, by journalist Barry Levine, obtained by the outlet, Jeffrey Epstein's accuser Virginia Giuffre, 37, claims she had been told to pose “in sexual positions” together with seven or eight Russian girls brought by a modelling agent in front of the Duke of York.

Guiffre is cited in the book as alleging that Prince Andrew had visited Little St James Island in 2002.

“We were topless and he [Epstein] had us in sexual positions ...when I walked in Andrew and Jeffrey were seated in chairs ‘Why don’t you girls start kissing and have some fun?’. Jeffrey and the prince were just sitting back laughing,” the alleged sex trafficking victim is quoted as saying in the book, released on Tuesday.

In The Spider Giuffre, then a teen, insists that a year before the photoshoot, she was also forced to engage in oral sex with Prince Andrew in New York in front of a lurid six-foot 'lesbian' oil painting of herself.

The woman claims that the royal grinned like “a kid going to Disney World” before their sexual encounter.
Together with another Epstein accuser, Johanna Sjoberg, who worked as Maxwell's assistant, Giuffre alleges she was sat on to Prince Andrew's knee and had an oral “sexual encounter” with him in Epstein's massage room, says the book.

British socialite Ghislaine Maxwell has been denying her alleged role in the sex trafficking web masterminded by Jeffrey Epstein, who was found dead in his cell at the Metropolitan Correctional Center in New York City in August 2019 where he was awaiting trial.

Maxwell is currently awaiting trial in the US on charges of procuring teenage girls for Epstein to abuse.

Jeffrey Epstein accuser Giuffre has been claiming that she was trafficked by the late billionaire to have sex with the Duke of York on three separate occasions, including when she was 17. Under US law she was still a minor at the time.

Prince Andrew has persistently denied all accusations levelled at him or any sexual contact with Giuffre.

The fresh allegations against Prince Andrew contained in the new book have been dismissed by a source close to the embattled royal as "unsubstantiated and lurid", and invented expressly for the purpose of selling books.

Representatives of the royal at Buckingham palace declined to give any official comment on the accusations contained in the book.