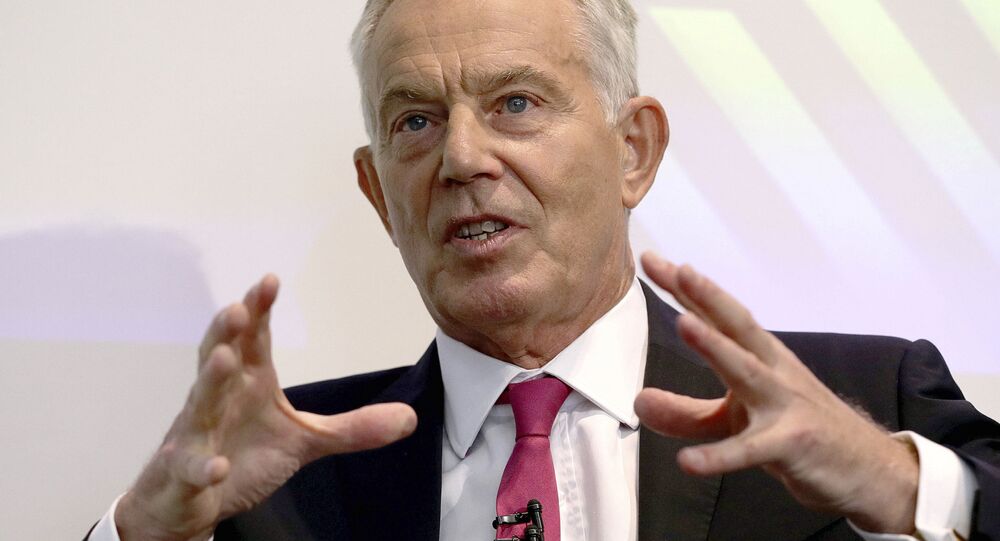 Former UK prime minister Tony Blair flew to Washington DC on 14 September to attend a ceremony at the White House as Bahrain and the UAE officially established diplomatic ties with Israel by signing the Abraham Accords the following day.

Tony Blair has been accused of violating COVID-19 restrictions, reported The Sunday Telegraph.

Ten days after the former UK prime minister returned from a trip to the US on a private Falcon 7X jet, pictures obtained by the outlet are suggested as showing him exiting Harry’s Bar in London’s Mayfair.

In line with coronavirus restrictions in place since June across the United Kingdom, which is witnessing a spike in cases of the respiratory disease, people are required to self-isolate for a fortnight upon return to the UK, unless they are coming from countries on the official “travel corridors” list. The latter has never included the US.

Those failing to follow the rules could be liable for a £1,000 fine, or potential prosecution.

According to the outlet, Blair had sought special exemption from the COVID-19 rules from Whitehall officials, but did not receive the formal letter he would have needed to skip the isolation period.

Blair, 67, is cited as claiming he was advised to follow rules on attending “international conferences” when he flew to the US to attend a ceremony at the White House as Israel signed agreements establishing formal relations with Bahrain and the UAE.

However Blair, who stepped down from his No 10 post role as Middle East envoy in 2015, is considered a private citizen.

Accordingly, Blair would have required “an exemption letter to show at the border”.

Tony Blair flew to Washington DC on 14 September as Bahrain and the UAE officially established diplomatic ties with Israel by signing the Abraham Accords the following day.

The ceremony came after US President Donald Trump and his administration brokered the historic deal, which was strongly opposed by Palestinian leaders.

At the White House event Blair was pictured with other guests on the South Lawn, holding a face mask in his hand and posing for pictures with US political figures. One of these, veteran pollster Frank Luntz, was cited as saying:

“Tony Blair was a rockstar at this event. People were lining up for photos with him.”

After his return to the UK on 16 September, just ten days later, on 26 September, Blair was seen leaving the restaurant in London’s Mayfair.

In response to the report, a spokesman for Tony Blair said he had been invited by the US government to the ceremony, described as a “diplomatic conference”, due to his role in facilitating the agreement between Israel and the UAE.

© REUTERS / TOM BRENNER
Israel's Prime Minister Benjamin Netanyahu stands with U.S. President Donald Trump after signing the Abraham Accords, normalizing relations between Israel and some of its Middle East neighbors, in a strategic realignment of Middle Eastern countries against Iran, on the South Lawn of the White House in Washington, U.S., September 15, 2020

It was also added by the spokesman that Blair “posed no risk to anyone” as he was tested for COVID-19 several times prior to his departure, on arrival in Washington, and since returning to the UK.

“We believe he followed all UK and US government guidelines as advised,” added the spokesman.

A Foreign Office spokesman was cited by the outlet as saying:

“The FCDO provides travel exemptions to diplomats travelling on business relating to the interests of the UK, -representatives of international organisations, and their families and dependants. Those issued an exemption will not need to self-isolate.”

“It sets an appalling example to ­travellers if a former prime minister appears to flout the rules in such a flagrant manner,” said David Jones, a Conservative member of Parliament’s public administration committee.

He added it was “hard to see” how Blair could claim relying on successive testing “when we haven’t got a testing regime”.
The report comes as over half of the UK is currently under extra coronavirus restrictions, with worst-hit areas being moved up England's new three-tier alert system.

Another 16,171 cases of COVID-19 were earlier confirmed in the UK, with the death toll reaching 43,579, according to government figures. The total number of positive coronavirus cases nationwide now stands at 689 261, according to the WHo situation report dated 17 October.

Not That Funny: UK Comedian Claims Virus Worse Than COVID-19 'Will End Humanity'