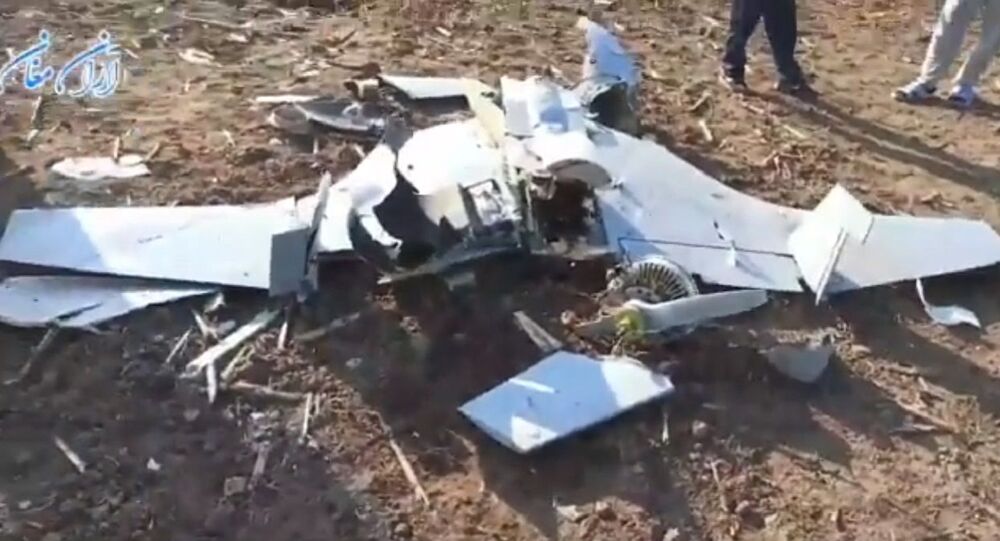 Tehran previously reported the destruction of an unidentified foreign drone in its province of East Azerbaijan, south of the Nagorno-Karabakh conflict zone, on 29 September, and on 7 October sent formal diplomatic notes of protest to both Armenia and Azerbaijan about stray missiles and shells making their way into Iranian territory.

An unidentified drone has crashed in the Iranian province of Ardabil near the border with Azerbaijan, the Islamic Republic News Agency has reported, citing the province's deputy governor, Behrouz Nedaei.

Footage which has yet to be authenticated has appeared online, appearing to show the drone's remnants on the ground in an agricultural field.

The drone in the footage looks similar to the Harop, a loitering munition drone developed by Israel Aerospace Industries.

Nedaei said no damage was caused by the crash, and that an investigation is underway to determine whether the drone belonged to the Azerbaijani or Armenian military.

Armenia has repeatedly accused Israel and Turkey of selling their drone designs to Azerbaijan. Armenia is known to have produced a range of small drones for military use, including the X-55 and the Krunk reconnaisancce unmanned aerial vehicles. Neither of those designs looks similar to the drone featured in the footage coming out of Ardabil.

Iran's northwestern border is located less than 65 km from Stepanakert, the capital of the self-proclaimed Nagorno-Karabakh Republic. Fighting for the territory between Armenia and Azerbaijan flared up late last month.

Tehran has repeatedly called on both Yerevan and Baku to halt fighting immediately, and last week, formally warned both parties against any more accidental drone, missile or artillery strikes into the Islamic Republic's territory, stressing that Iran would resort to "measures stronger than warnings" if the stray fire didn't stop.

Iran has already shot down at least one stray drone in its province of East Azerbaijan, and said that one of its villages had come under fire on 1 October, injuring a six-year-old child and damaging several buildings.

© AFP 2020 / ARIS MESSINIS
Armenia Launches Criminal Case Over Azerbaijan's Alleged Use of Mercenaries in Karabakh Conflict
The decades-old Karabakh conflict escalated into large-scale flighting on 27 September, after both sides accused one another of large scale artillery, missile and air strikes. At least 65 civilians and hundreds if not thousands of troops from both sides have been killed, and between 70,000-75,000 Karabakh residents have been displaced.

The Armenian-Azeri dispute for the region began in the late 1980s, and between 1992-1994 Yerevan and Baku fought a brutal war for the territory which led to the death of over 30,000 people, and displaced over 1.1 million more. Thousands more have been killed in flare-ups since then.