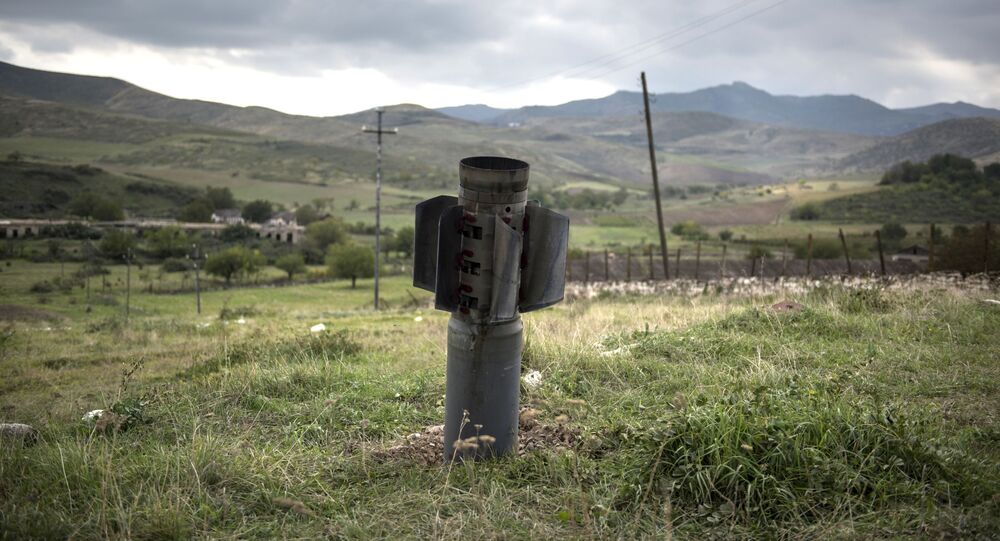 YEREVAN (Sputnik) - Sappers in the unrecognized Republic of Artsakh (Republic of Nagorno-Karabakh) continue to search for and neutralize unexploded shells, with over 600 unexploded munitions having been found in the capital of the self-proclaimed republic, the Nagorno-Karabakh Infocenter reports.

"In Stepanakert alone, 673 missile, shock and cluster munitions have already been found," the Nagorno-Karabakh Infocenter said on its Telegram channel on Tuesday.

The unexploded ordnance is mostly of Israeli and Turkish origin, according to Nagorno-Karabakh authorities.

Yerevan has claimed that Turkey has been supplying the Azerbaijani army with foreign terrorists from the Middle East. French President Emmanuel Macron has accused Turkey of having transferred at least 300 mercenaries from Syria’s Aleppo via the Turkish city of Gaziantep to join the ranks of the Azerbaijani army in Nagorno-Karabakh against the Armenian forces. Baku has stressed that Azerbaijan has not used any mercenaries, demanding an apology.

On Saturday, spokesperson of the president of the unrecognized Republic of Artsakh, Vahram Poghosyan, said violations of the Nagorno-Karabakh ceasefire, particularly the shelling of Stepanakert, are disrespectful of the Friday talks in Moscow that led to Yerevan and Baku agreeing to stop hostilities in the region. Baku and Yerevan have both accused each other of violating the ceasefire over the weekend.

Clashes along the contact line of the disputed Nagorno-Karabakh region started in late September. Artak Beglaryan, the human rights ombudsman of the self-proclaimed Republic of Nagorno-Karabakh, said on Monday that at least 31 civilians have died since the hostilities broke out in Nagorno-Karabakh.