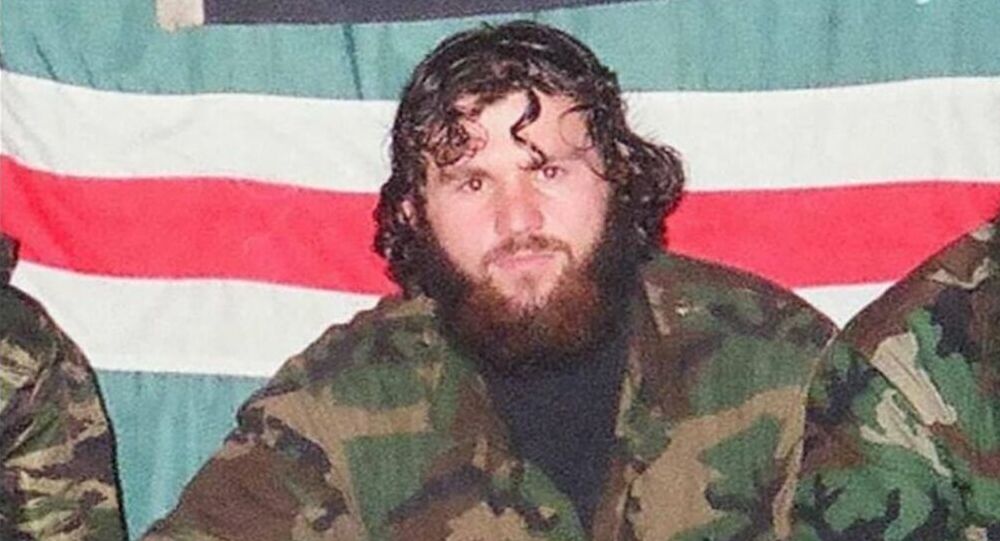 Khangoshvili, Killed in Berlin, Was Wanted by Russia for Role in Terrorist Attacks

MOSCOW (Sputnik) - Zelimkhan Khangoshvili, a Georgian citizen who was killed in Germany in August 2019 and whose murder trial is now underway, was accused in Russia of involvement in a number of terrorist attacks.

Khangoshvili was a member of extremist groups including those led by Shamil Basayev, Khattab, Abu Hafs and Abu Zaid, who were responsible for some of the bloodiest terrorist attacks in Russian history, according to Sputnik sources in Russian security agencies.

Among others, Khangoshvili was involved in the hostage-taking at the Beslan school, which killed 334 people, including 186 children - perhaps the most outrageous and horrific terrorist crime.

Khangoshvili, nicknamed Dyshno, joined the ranks of militants in the North Caucasus in 1999, when he was 20-years old. The first episode attributed to him was the attack on the village of Chervlennaya in Chechnya. During the battle, 20 soldiers were killed, another 28 were wounded.

A year later, Khangoshvili joined a bandit group headed by the international terrorist Abu Hafs, and then joined another bandit, Abu Al-Walid, who, among other things, was responsible for the 1996 attack on a military convoy in the Argun Gorge and the 1999 terrorist attacks in Moscow and Volgodonsk.

Since 2003, he became subordinate to Abu Zaid, the emissary of al-Qaeda (a terrorist group banned in Russia) in the North Caucasus, who was directly involved in the terrorist attack in Beslan, as well as in the bombing of a military hospital in Mozdok in 2003, when 52 people died.

"In 2004, Khangoshvili took part in the planning and preparation of terrorist attacks in Beslan and in the Moscow metro between Avtozavodskaya and Paveletskaya stations," one source said.

The metro attack left 41 people killed and more than 100 wounded.

In addition, according to the sources, Khangoshvili's direct involvement in a series of attacks on federal convoys on the road section between the villages of Alkhasty and Galashki in Ingushetia in May-August 2003 was established. Then, about 20 Russian soldiers were killed.

According to Russian law enforcement officials, as part of a bandit group, Khangoshvili participated in an attack on civilians, police officers and military in the village of Nesterovskaya, as well as on a traffic police post located along the Rostov-Baku highway.

From June 21 to June 22, 2004, Khangoshvili, under Basayev's command, took part in the attack on Ingushetia, in which dozens of people were killed and more than 100 wounded.

In 2005, Khangoshvili went to Georgia with a forged passport, hiding from Russian security forces in the Akhmeta Region, but there he did not lose contact with Chechen terrorists. There, according to sources, he received and subsequently distributed money to help militants.

According to sources, in 2006, Khangoshvili was training a group of several dozen militants in the area of ​​the Georgian village of Duisi for the subsequent transfer to the North Caucasus to organize provocations against Russian peacekeepers in South Ossetia.

According to the Russian security agencies' materials, in 2009-2012, Khangoshvili, together with Akhmed Chatayev, who organized a terrorist attack in Istanbul airport in 2006 when a suicide bomber killed 45 people, set up a training camp for militants in the Pankisi Gorge, where terrorists were trained in fire, tactical, mine explosive and sabotage disciplines.

© Sputnik / Sergey Guneev
Russia to Respond If Germany Takes Measures on Khangoshvili Case - Diplomat
Graduates of this "school" were sent to Russia and joined Doku Umarov's gangs. The latter was responsible for the explosion of the Nevsky Express in 2009 (28 dead and over 130 wounded), the explosions in the Moscow metro in 2010 (41 dead and 88 wounded) and the Domodedovo airport in 2011 (37 dead and 170 wounded).

In 2013, Khangoshvili also served as a regional coordinator in the structure of the Caucasus Emirate (also banned in Russia as a terrorist organization), maintaining communication between Umarov and foreign emissaries.

In addition, he was recruiting Muslim youth in the Pankisi Gorge and organized a channel for the illegal transfer of militants and weapons via Turkey to Syria, where a civil war was already underway.

In 2012, Khangoshvili, having received a Georgian passport in the name of Tornike Kavtarashvili, organized the transfer of a group of militants from Georgia to Russia. However, something went wrong, and during the battle with the Georgian security forces, part of the bandit group was destroyed.

According to the Georgian Interior Ministry, this was a special operation to eliminate a bandit group that had taken residents of the village of Lapankuri in Kakheti hostage. The ministry reported elimination of 12 militants and the death of three special forces troops.

At the same time, Khangoshvili himself managed to act as a mediator in the negotiations between the interior ministry and members of the gang. After refusing to lay down their arms, part of the gang was destroyed. The relatives of the killed militants subsequently accused Khangoshvili of the incident and threatened blood revenge for his "betrayal."

Assassination attempts were not long in coming, Sputnik's sources said. The first happened in 2013 in Georgia: Khangoshvili was seriously injured, but survived. The second happened in May 2015: Khangoshvili came under fire while driving a car from a private house in Tbilisi. Having received three gunshot wounds, he fled from the attackers and drove to a hospital, where he was treated.

After the assassination attempts and the appointment of former Georgian President Mikheil Saakashvili as an adviser to the Ukrainian president, Khangoshvili left for Ukraine in 2016. However, his activities were associated with this country even earlier.

Back in August 2014, while in Turkey, he received a significant amount of money from international terrorist organizations to transport a group of militants from Georgia to Donbas to participate in hostilities on the side of the Ukrainian Armed Forces, the sources said.

Arriving in Ukraine in 2016, Khangoshvili was also recruiting recruits for the punitive units of the Ukrainian army, mostly natives of Georgia and the North Caucasus, including former convicts.

With his help, more than 200 militants were deployed to southeastern Ukraine, the sources said. In addition, during his Ukrainian period, Khangoshvili, being Saakashvili's confidant, organized his protection and carried out various assignments.

In late 2016, Khangoshvili left for Germany, where he received refugee status.

On August 23, 2019, 40-year-old Khangoshvili was shot dead in Berlin's Tiergarten park. The suspect is Russian citizen Vadim Sokolov. According to the German investigation, the alleged killer drove up to Khangoshvili on a bicycle and fired at him with a Glock 26 pistol with a silencer. Khangoshvili died on the spot.

The accused was arrested shortly thereafter near the scene. A few days ago, a hearing on this case began in Berlin. The German investigation believes that the Russian received an assignment "from government departments of Russian" to eliminate Khangoshvili.

As indicated in the statement of the German Prosecutor General's Office, Russian agencies classified the murdered citizen of Georgia as terrorists.

As noted by Russian sources, Russia informed its Georgian, Ukrainian, US and German partners about Khangoshvili's activities.

Earlier, Russian President Vladimir Putin said that the Russian authorities had discussed with Germany the extradition of Khangoshvili in connection with his involvement in terrorism, including the explosions in the Moscow metro.

© Sputnik / Angelina Timofeeva
Berlin courthouse, where the trial of the murder of Georgian citizen Zelimkhan Khangoshvili in Berlin's Tiergarten park in August 2019 was held

The appeals of the Russian intelligence agencies to their German colleagues to extradite Khangoshvili were informally rejected, and a formal request from the Russian Prosecutor General's Office on this issue was never sent for this reason, Putin said. He also noted that the person killed in Berlin had taken an active part in hostilities on the side of the separatists in the Caucasus.