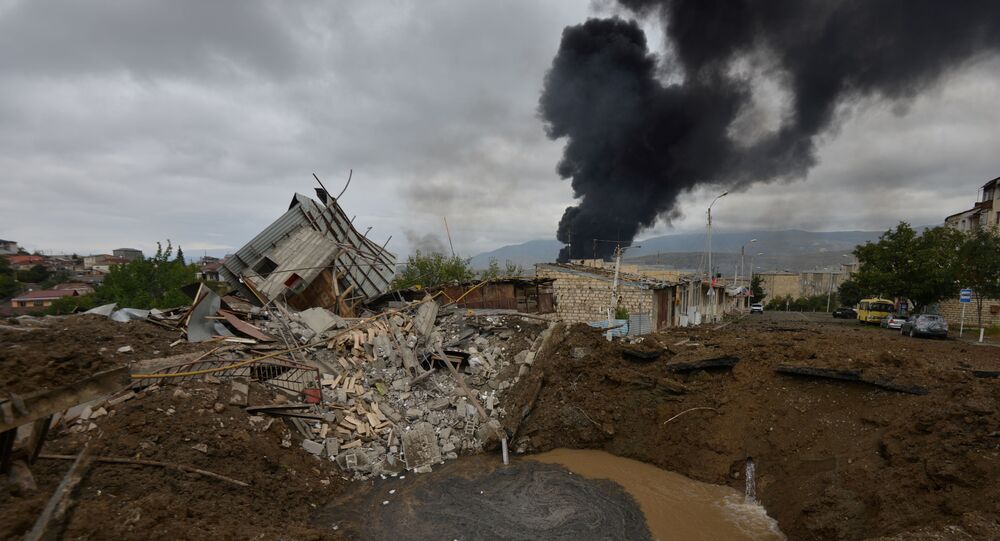 MOSCOW (Sputnik) - Greece supports an immediate termination of violence between Azerbaijan and Armenia in Nagorno-Karabakh and believes that involvement of third parties in the conflict should end, Prime Minister Kyriakos Mitsotakis said on Tuesday.

"The secretary-general and I have also discussed the recent dramatic developments in Nagorno-Karabakh and the continuing bloodshed, which — over and above, it's a humanitarian dimension — is a cause of destabilization in the region. We are in favour of immediate termination of hostilities, as well as foreign interventions that support them," Mitsotakis told a press conference alongside NATO Secretary-General Jens Stoltenberg in Athens.

Tensions in South Caucasus have been high for over a week. Azerbaijan, which considers Armenian-majority Nagorno-Karabakh part of its territory, has accused Armenia of initiating hostilities, while Yerevan, which supports the breakaway republic, said Baku was behind the escalation.

Azerbaijani capital Baku was rocked by mass protesters this summer with demonstrators calling for an all-out conflict with Armenia and for bringing back Nagorno-Karabakh under Azerbaijani control.

© AP Photo / Alexei Nikolsky
Assad Calls Erdogan 'Main Instigator and Initiator' of Renewed Nagorno-Karabakh Tensions
Since the onset of the confrontation earlier in September, Azerbaijan has enjoyed the support of Turkey. French President Emmanuel Macron said Paris had information that 300 Syrian militants had been sent to Baku via the Turkish city of Gaziantep.

Various media reports also suggested that Turkey had sent hundreds of Syrian militants to fight for Azerbaijan in Nagorno-Karabakh. Ankara has denied those reports.

Greece has blamed Turkey, a fellow NATO ally, of playing a destabilising role in the region, while also being in a dispute with Ankara over drilling rights in the Eastern Mediterranean.