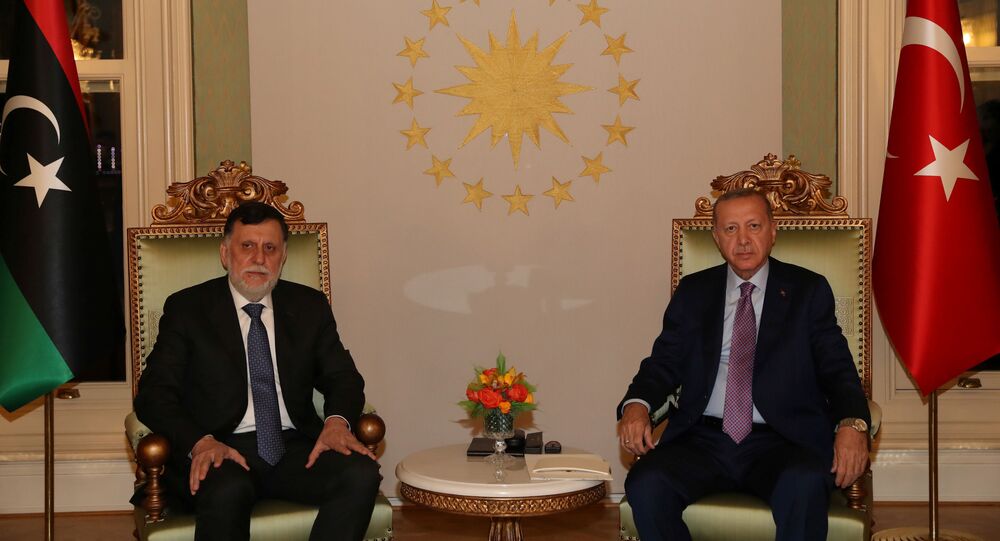 Erdogan Holds Talks With Head of Libya's Government of National Accord

MOSCOW (Sputnik) - Turkish President Recep Tayyip Erdogan has held talks with the head of the UN-recognised Libyan Government of National Accord (GNA), Fayez Sarraj, the Turkish presidential administration informed in a statement.

The talks were held on Sunday in Istanbul but no details of the conversation were disclosed. The previous meeting between Erdogan and Sarraj took place in Istanbul on 6 September.

Erdogan publicly said last month that he was against Sarraj’s resignation pic.twitter.com/KSQe50Usf3

On Friday, Russian Deputy Foreign Minister Mikhail Bogdanov discussed the settlement of the Libyan crisis with Turkish Ambassador Mehmet Samsar. They stressed the importance to settle as soon as possible the crisis in Libya on the basis of the corresponding UN Security Council resolutions and the decision adopted by the Berlin international conference in January 2020.

Prior to that, Sarraj announced his intention to transfer powers to a new executive authority by the end of October.

On 19 January, an international conference on Libya took place in the German capital, counting Russia, the United States, the European Union, Turkey and Egypt among its participants. The sides agreed to a ceasefire and noninvolvement of third parties in the Libyan conflict.

Libya has remained divided since the ousting and killing of Muammar Qaddafi in 2011. It is practically split in two, with the internationally recognised GNA in the country's west with headquarters in Tripoli, while the rival House of Representatives, elected in 2015, and the Libyan National Army headed by Khalifa Haftar took control over the east with its centre in Tobruk.