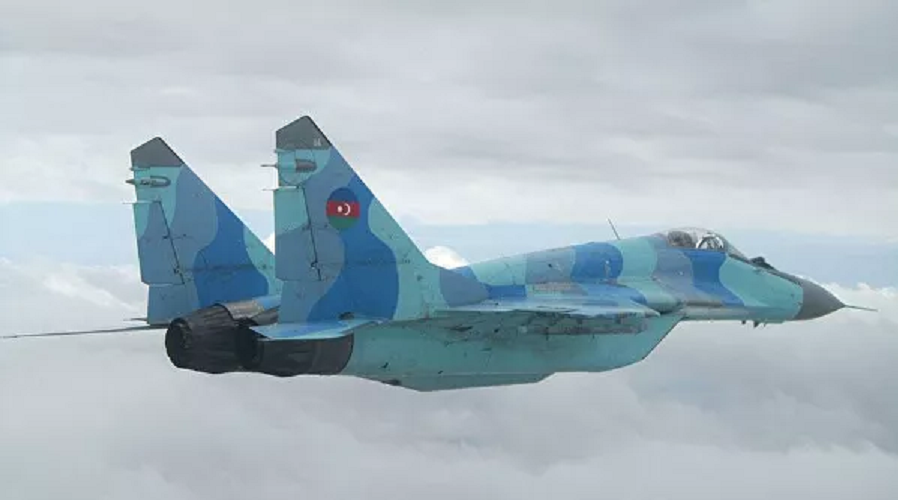 Sunday marks the seventh day of intense fighting in the contested South Caucasus region of Nagorno-Karabakh between Azerbaijani and Armenian Karabakh defence forces. The conflict started after both sides accused one another of shelling and air attacks starting September 27.

"At about 12:00 pm [local time] units of Karabakh's Defence Army destroyed three enemy aircraft and two tanks in the southern direction of the front," spokesperson Shushan Stepanyan reported in a post on her Facebook page.

Later in the day, Azerbaijani Ministry of Defence press secretary Anar Eyvazov dismissed the Armenian side's statement, saying "not a single Azerbaijani Armed Forces plane has been shot down." Eyvazov accused Armenia of spreading 'false' information in an attempt to hide its own losses on the front.

Earlier Sunday, Nagorno Karabakh forces also reported the destruction of a military airfield in the Azerbaijani city of Ganja. Eyewitnesses on the Azeri side responded by accusing Armenia of carrying out missile attacks "against dense residential areas."

Early Sunday morning, a Sputnik correspondent reported that air raid sirens had gone off in the capital of the unrecognized Republic of Artsakh (the Armenian side's name for Nagorno-Karabakh), with multiple artillery shells said to have landed outside the city.

The same day, Yerevan also denied reports by the Azerbaijani side that rocket attacks on Azerbaijani cities were coming from Armenia proper.

The latest flare-up of fighting in Nagorno-Karabakh began on September 27, with both sides accusing one another of starting the aggression. At least 36 civilians, and as many as 3,600 troops from both sides have been killed, with Armenian and Azeri forces also claiming the destruction of dozens of tanks, aircraft, helicopters, drones, and entrenchments.

© Sputnik / Aram Nersesyan
Series of Blasts Rocks Nagorno-Karabakh Capital of Stepanakert, Reports Say
The conflict in Nagorno-Karabakh began in the late 1980s, when nationalist sentiments brewing in both the Armenian and Azerbaijani Soviet Socialist Republics within the Soviet Union unleashed by General Secretary Mikhail Gorbachev's 'perestroika' and 'glasnost' political and economic reforms led authorities in the ethnic Armenian majority Nagorno-Karabakh autonomous region of Azerbaijan to attempt to secede and join Armenia proper. Baku tried to prevent this from happening, and in late 1991 abolished the region's autonomous status altogether.

Between 1992 and 1994, Armenian and Azerbaijani forces waged a full-scale war for control of the region, with the Armenian side ultimately achieving victory and securing not only Nagorno-Karabakh, but also several adjacent territories of Azerbaijan. The region has suffered repeated flare-ups in the decades since, with upwards of 42,000 soldiers, militiamen and civilians killed in the fighting, and over a million Armenians and Azerbaijanis displaced, both within Nagorno-Karabakh and in other areas of both countries.