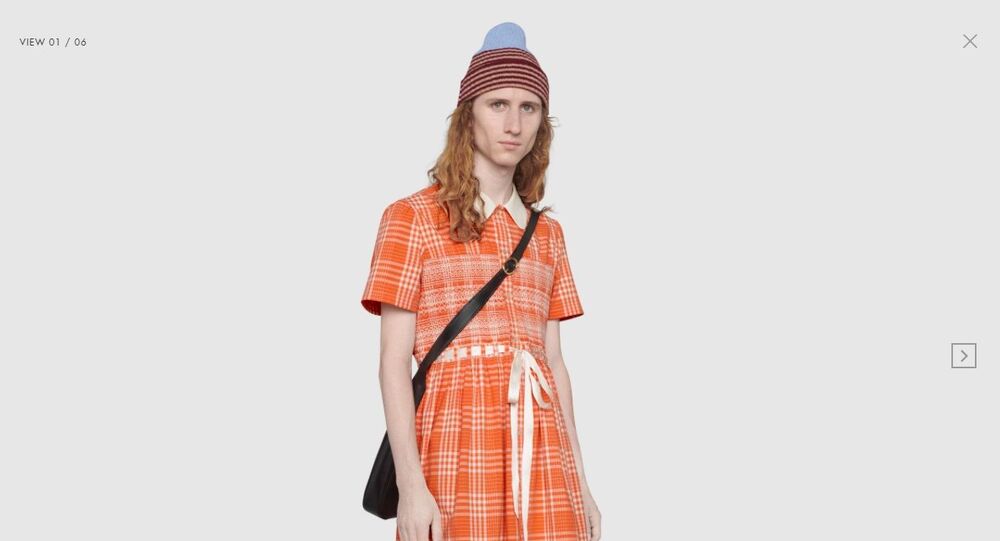 As it unveiled its Fall Winter 2020 fashions, luxury brand Gucci stated it sought to rip up “toxic stereotypes that mold masculine gender identity”.

Italian luxury brand Gucci is selling a $2,600 orange and beige check dress for men as part of its Fall/Winter 2020 collection. The garment features a satin bow detail, mother-of-pearl buttons, and a “peter pan collar”.

Branded by the fashion giant as a 'Tartan cotton long smock shirt,' said to be inspired by grunge looks from the early 1990s, it can be 'styled over ripped denim jeans'.

(And you thought 2020 could not get any worse.) pic.twitter.com/jncaHMxfE4

​In apprehension of a barrage of questions over the garment, Gucci stated that the smock shirt, made from 100 percent cotton “reflects the idea of fluidity explored for the Fall Winter 2020 fashion show, disrupting the toxic stereotypes that mold masculine gender identity.”

According to the online description, the features of the garment “add a childhood inspired element, which ties to a recurrent theme of the collection”.

For those who find orange not particularly flattering, there's also a floral print creation at a cheaper price of $1,150.

Netizens were left unimpressed by the garment.

Collage of Goodwill rejects on a male anorexic!

That’s what passes as a man these days?

I don’t think I could keep my mouth shut if either of my daughters brought that home.

Gucci's doing what Gucci does, making money. My sorrow is the 'men' that would wear this.

I pray aliens invade us.... What?... sorry, apparently it's already happened

Full pass..... but if someone else wants to wear it then it’ll be my laugh of the day. pic.twitter.com/7vfFS97KxL

This is not going to convince anyone that "toxic" masculinity is less attractive to straight women than a skinny dude in a dress. I have no problem with LGBTQ so long as everyone is cool with me being a straight man.

We need to bring bullying back.

​Weeks earlier Gucci nonplussed fashionistas by releasing a pair of worn-looking Eco-washed jeans for their autumn/winter collection.
Selling for $600, the organic denim jeans give off the convincing illusion of fresh grass stains around the knees.

For those who'll say, you can reproduce the grass stain ... no you cant, its GUCCI grass!!! pic.twitter.com/yb11fGt6g7

​While not everyone was impressed, Gucci claimed the material had been specifically treated to emanate a 'grunge vibe'.