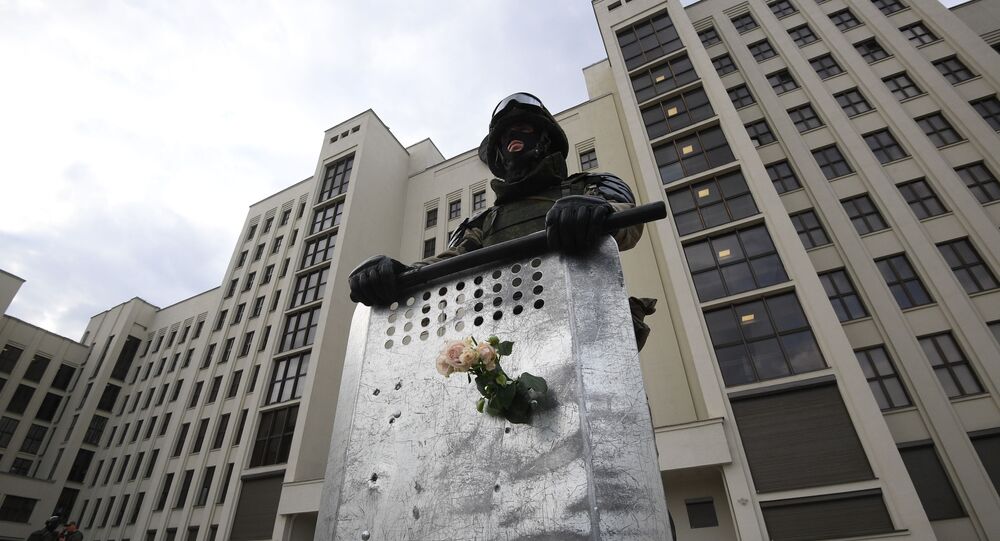 Last month, Minsk warned Western nations that sanctions and other attempts to interfere in Belarus's internal affairs would have an effect contrary to that intended. Earlier, the US, the UK and the European Union announced plans to sanction Belarus in connection with August's presidential elections and the widespread unrest that has followed.

© CC BY-SA 3.0 / Tatiana Matlina / Ministry of Foreign Affairs Belarus Minsk
Belarus Mulling Viability of Maintaining Diplomatic Relations With EU Amid Sanctions
At a news conference in Brussels Friday, German Chancellor Angela Merkel suggested that the EU's agreement to sanctions against Belarus was "an important signal because it strengthens the hand of those who are protesting for freedom of opinion in Belarus."

EU foreign affairs chief Josep Borrell added that the EU could "impose more restrictive measures" against Belarus "if the situation does not improve" and freedom and the right to free and fair elections is not respected.

Minsk responded to Brussels' personal sanctions by issuing its own list of EU officials who would be barred from entering Belarus, but said it would not make the list public. In a statement, the Belarusian Foreign Ministry noted that Belarus would have to reconsider the viability of its diplomatic relations with the EU amid the new restrictions.

Belarus also imposed sanctions on British and Canadian officials in a tit-for-tat response to sanctions imposed earlier by London and Ottawa, which targeted officials including Lukashenko.

Press service of the President of the Republic Belarus
Belarusian President Alexander Lukashenko speaks during an interview to Russian journalists at the Independence Palace in Minsk, Belarus

Also Friday, Berlin announced that Merkel would meet with Belarusian opposition leader Svetlana Tikhanovskaya on Tuesday. Macron met with her in Vilnius earlier this week.

Late last month, in a speech to the United Nations General Assembly, Belarusian Foreign Minister Vladimir Makei accused some Western nations of attempting to destabilise the situation in Belarus in the wake of August's presidential elections, and alleged that "after unsuccessful attempts to impose colour revolutions on us, we are now experiencing external interference aiming to undermine the very construction of our state."

Makei stressed that any attempts by foreign states to interfere in Belarus's internal affairs, including sanctions and other restrictions, would "have the opposite effect" and be "harmful for absolutely everyone."

The US and its European allies have sanctioned Belarus since the late 1990s, accusing Minsk of a slew of crimes ranging from human rights violations to electoral fraud. The sanctions were partly lifted in the mid-2010s amid improving relations between Belarus and the West. President Lukashenko has repeatedly said that he is not afraid of any sanctions, because neither he nor members of his family or members of the government have any substantive wealth stashed away abroad. In 2006, Lukashenko urged the West to "take" any accounts of his that they managed to find, and added that "many foreigners, Americans and others - are infuriated by the fact that Lukashenko has nothing by which he can be grasped."

Belarus has been rocked by weeks of protests in the aftermath of the 9 August presidential election in which Lukashenko handily won a sixth consecutive term in office. The Belarusian opposition accused the government of large-scale fraud and demanded a "peaceful handover of power", and opposition leader Tikhanovskaya fled the country to the EU. Lukashenko responded to the protests by promising constitutional reforms, but refused to hold any new elections immediately, and stressed that he would not be forced out of office by a minority in the streets.

© REUTERS / TT News Agency
Why Sweden and Belarus Defied the Lockdown 'Consensus'
US and European officials have repeatedly slammed Belarusian law enforcement for excessive use of force in breaking up protests. President Lukashenko has responded to these allegations by suggesting that US and European leaders sort out their own problems, such as the Gilets Jaunes protests in France, or the anti-racism and police violence demonstrations in America, before "pointing their fingers and telling [Belarus] how to live."
...
Reddit
Google+
Blogger
Pinterest
StumbleUpon
Telegram
WhatsApp
338
Community standardsDiscussion