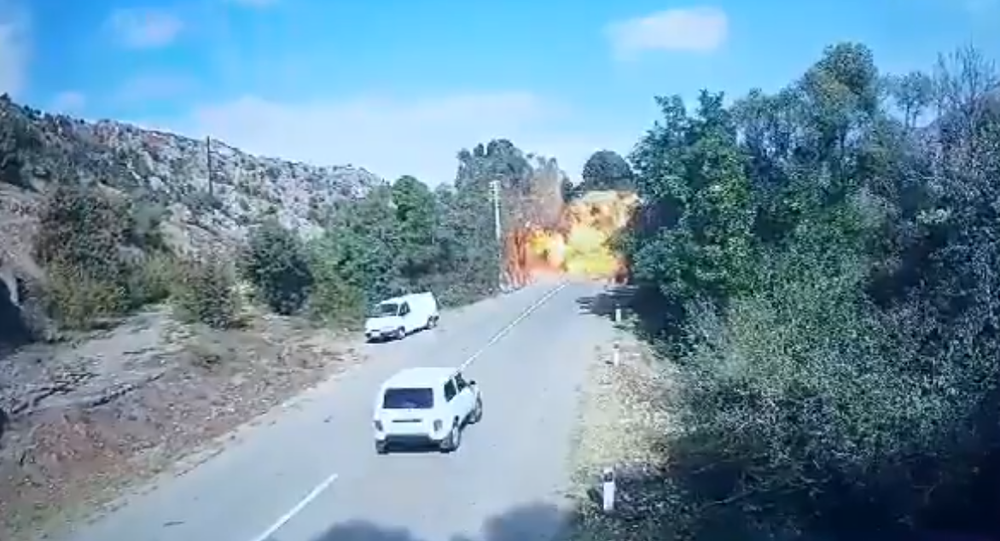 The long-running Armenian-Azeri conflict over the region of Nagorno-Karabakh exploded into full-scale war in the early 1990s before becoming a frozen conflict occasionally broken by new outbursts of violence. The latest clashes began Sunday, with each side blaming the other for the escalation.

Nagorno-Karabakh's operational headquarters information centre has released footage of an alleged Azerbaijani attack on civilian infrastructure, including the shelling of a bridge connecting Armenia and the breakaway region.

The security cam footage shows vehicles travelling along a road to the bridge before what appears to be an artillery shell or missile strikes it, resulting in a massive fireball and a plume of smoke.

According to an Armenian media analysis of the projectile that struck the bridge, it may have been an Israeli-made Long Range Attack (LORA) theatre quasiballistic missile.

The Azerbaijani side has not commented on the suspected attack.

Earlier Friday, the Armenian Defence Ministry accused the Azerbaijani military of launching an attack on Stepanakert, capital of the self-proclaimed Nagorno-Karabakh republic.

There are two main routes connecting Armenia and Nagorno-Karabakh: the western Goris-Stepanakert route and the recently completed northern Vardenis-Martakert highway. Local authorities have made plans to build a third route.

The long-running conflict in Nagorno-Karabakh between the self-proclaimed Armenian-controlled Artsakh Republic and Azerbaijan exploded into open warfare on Sunday, with each side blaming the other for starting the fighting.

The fighting has left up to 3,600 people from both sides dead, including at least 31 civilians, and led to the destruction of an array of infrastructure, including civilian administration centres, schools, and homes. Each side has also claimed to have destroyed various types of military equipment, including tanks, aircraft, and drones. The Armenian side and France have accused Baku of deploying jihadist militiamen imported by Turkey from Syria.

The Nagorno-Karabakh conflict flared-up at the height of Soviet leader Mikahil Gorbachev's "perestroika" reforms, which saw a rise in regional nationalist sentiments in the Caucasus and across the Soviet Union. These sentiments prompted leaders in the majority-Armenian populated Nagorno-Karabakh Autonomous Region of the Azerbaijani Soviet Republic to attempt to secede and join the Armenian Soviet Republic. In late 1991, Azerbaijan's parliament abolished the region's autonomous status, prompting it to declare its complete independence. Azerbaijan lost control over Nagorno-Karabakh and several adjacent territories in full-scale fighting with Armenian forces between 1992 and 1994. The war led to the displacement of over 1 million Azerbaijanis and Armenians, both within the disputed region and other parts of the two countries, and to the deaths of over 42,000 soldiers, militiamen, and civilians from both sides.