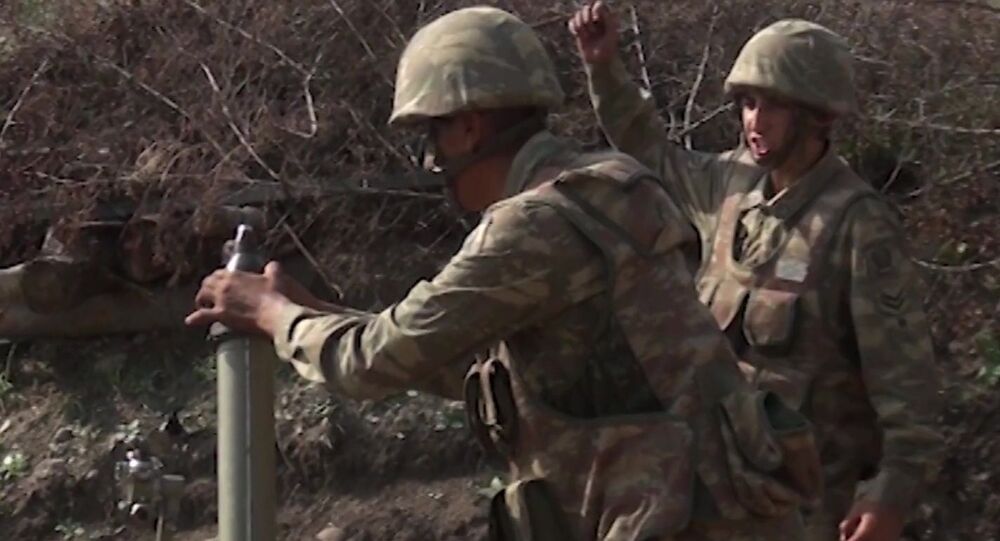 Macron: France Has Info Militants Sent From Syria to Fight in Karabakh Conflict

Previously, Russia raised concerns about reports that illegal armed militants were being transferred to the Nagorno-Karabakh conflict zone from Libya and Syria to participate in the local hostilities.

French President Emmanuel Macron announced on Thursday that a group of Syrian militants has been deployed in the Nagorno-Karabakh conflict.

In the meantime, Moscow has also addressed the escalation, stating that reports of mass recruitment of militants in northern Syria to be transferred to Karabakh raise major concerns about the situation in the region. The Russian Foreign Ministry has stressed that it has information about the presence of militants from the Middle East in Karabakh not just from media, but from its own sources.

The reports come just a day after President Macron warned against the clashes escalating in the region, slamming Ankara for its "warlike" statements, as Turkey promised to support in Azerbaijan both "in negotiations and in combat".

© AFP 2021 / GONZALO FUENTES
French President Emmanuel Macron speaks during a news conference at the Pine Residence, the official residence of the French ambassador to Lebanon, in Beirut on September 1, 2020.

The clashes between Baku and Yerevan over the Nagorno-Karabakh region - a self-proclaimed republic in Transcaucasia that declared its independence from Azerbaijan in 1991 - have severely escalated since Sunday. Both sides have blamed each other for the aggression and shared numerous photos and videos of their adversary's destroyed military vehicles and aircraft.

Russia, France, the US, and many other countries have urged the sides to stop the clashes, while Turkey has supported Baku, stating that Armenia must return the lands it has "occupied" to Azerbaijan.

Yerevan, in turn, has accused Ankara of participating in the conflict, saying that Turkish planes have supported the Azerbaijani forces during their offensive and even downed an Armenian Su-25 jet.