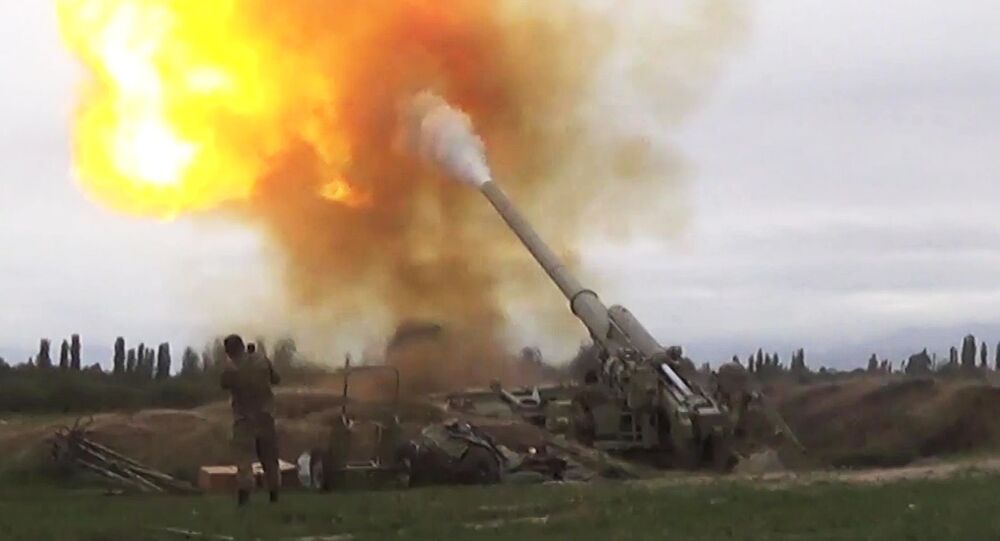 Tensions between Armenia and Azerbaijan have escalated since Sunday, with the sides accusing each other of being responsible for the aggression along the line of contact in Nagorno-Karabakh.

The Armenian Defence Ministry said the armed forces of the unrecognised Republic of Nagorno-Karabakh had downed two Azerbaijani planes and a helicopter, thereby reporting overall three planes allegedly downed in the area since Thursday morning.

"The divisions of Armenia's air defence in Karabakh shot down" the said vehicles in the south and south-east of the contested region, the press secretary for Armenia's Defence Ministry, Shushan Stepanyan, wrote on Facebook. She claimed the helicopter fell on territory controlled by the Karabakh armed forces.

The Armenian Unified Information Centre reported citing preliminary data that the planes allegedly shot down by the air defense subdivisions of the Armed Forces of Artsakh were Su-25s, and the helicopters were Mi-24s.

Azerbaijan has denied claims that its aircraft were downed, saying neither military planes, nor choppers were used today in Karabakh.

Earlier in the day, the Karabakh Defence Ministry claimed on Facebook that its forces had downed an Azerbaijani military helicopter that crashed in Iran near Varazatumb in the southern part of the Artsakh-Azerbaijan conflict zone. Azerbaijan's Defence Ministry has since brushed off the claim that its helicopter crashed after being hit by enemy forces, dismissing it as a lie. It said the same regarding the media reports about a plane allegedly being downed by Armenian forces.

The situation in the contested area in Transcaucasia worsened on Sunday, after Armenia and Azerbaijan engaged in a blame game over military provocations and exchange of fire.

The escalation prompted both countries to introduce martial law and mobilisations.

The conflict dates back to February 1988, when the Armenian-majority Nagorno-Karabakh Autonomous Region proclaimed independence from the Azerbaijani Soviet Socialist Republic. An armed confrontation spanned from 1992 to 1994, with negotiations having been underway ever since for a peaceful settlement of the conflict with the mediation of the OSCE Minsk Group, led by Russia, the United States, and France.

The self-proclaimed republic, which is formally part of Azerbaijan, has been seeking international recognition, with Armenian Prime Minister Nikol Pashinyan not ruling this out in light of the escalated tensions in the area.