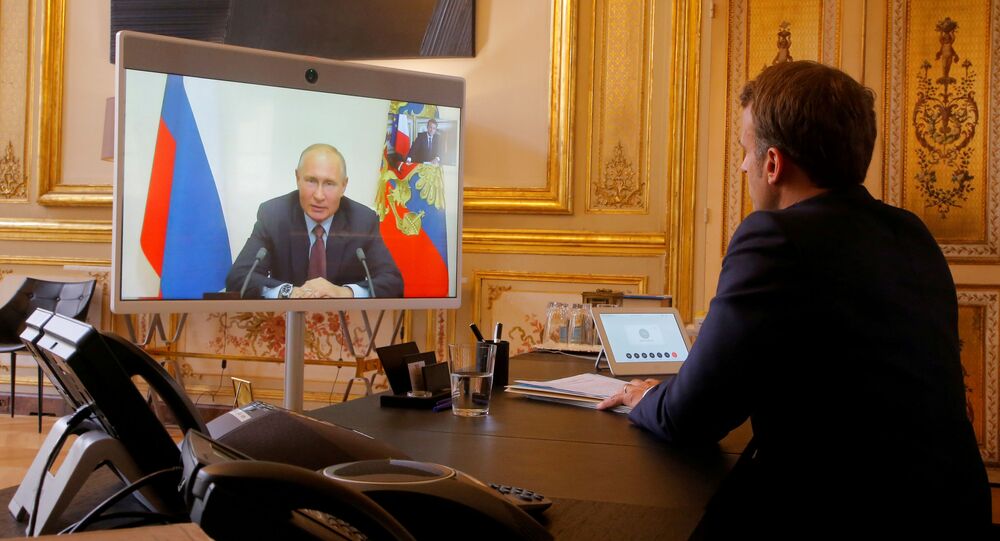 The presidents discussed the tense situation in the region in a phone call initiated by the French side, calling on the parties to the conflict to immediately down arms.

Russian President Vladimir Putin and his French counterpart Emanuel Macron have expressed serious concern over the ongoing full-scale hostilities around the Nagorno-Karabakh region.

"[The parties] have thoroughly discussed the dramatic escalation of the situation in the Nagorno-Karabakh conflict zone", the Kremlin press service said in a statement on Wednesday.

Putin and Macron discussed future steps the Minsk OSCE group could take to de-escalate the conflict in the region, stressing that there are no alternatives to a diplomatic settlement of the crisis in the region.

"The sides noted that there was no alternative to the settlement of the Nagorno-Karabakh crisis by political and diplomatic methods. In this context, specific parameters of further interaction were considered, primarily in the format of the OSCE Minsk Group", the Kremlin said.

Both leaders called on the parties to the conflict to "fully cease hostilities as soon as possible, de-escalate tensions, and exercise restraint".

The situation escalated on the contact line in Karabakh between Baku and Yerevan on Sunday, with both sides accusing each other of engaging in provocation on the line of contact.

The escalation triggered a broad international backlash, prompting numerous countries and organisations to call on the warring parties to cease fire and return to OSCE-chaired negotiations.