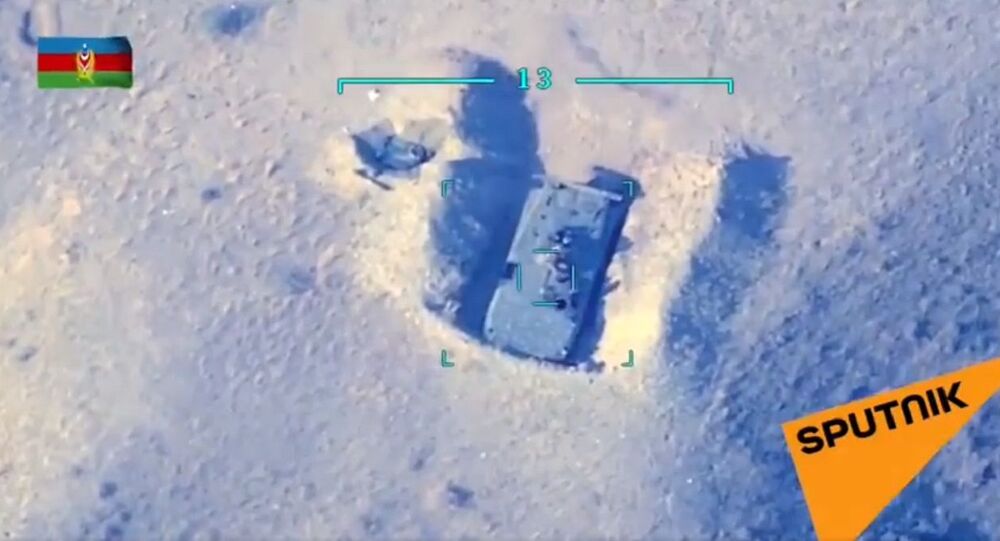 Both sides have previously published numerous videos of helicopters, drones, tanks, and armoured vehicles allegedly eliminated during the clashes. Azerbaijan has initiated a partial mobilisation due to the crisis, while Armenia has introduced a full one.

Azerbaijan’s Ministry of Defence published another video allegedly showing Baku's forces destroying Armenian military equipment amid the clashes between the two countries in Nagorno-Karabakh. The footage depicts a tank and several other military vehicles destroyed in the strikes, with huge clouds of smoke rising from the sites.

Clashes along the line of control began on Sunday, with Yerevan and Baku both accusing each other of aggression and saying that the opposite side is targeting military personnel as well as civilians.

Amid the clashes, Turkey has expressed support for Azerbaijan, promising to back it "in negotiations and in combat"; other countries, meanwhile, have warned that the escalation must be stopped.

© Photo : ARMENIAN MINISTRY OF DEFENCE
An ethnic Armenian soldier fires an artillery piece during fighting with Azerbaijan's forces in the breakaway region of Nagorno-Karabakh, in this handout picture released September 29, 2020

Nagorno-Karabakh or Artsakh, an Armenian-majority autonomy proclaimed its independence from Azerbaijan in 1991, which led to a major military conflict between Baku and Yerevan. However, in 1994 the sides agreed to stick to a peace process mediated by the OSCE Minsk Group. The conflict has since remained frozen, while Nagorno-Karabakh has remained an unrecognised state.