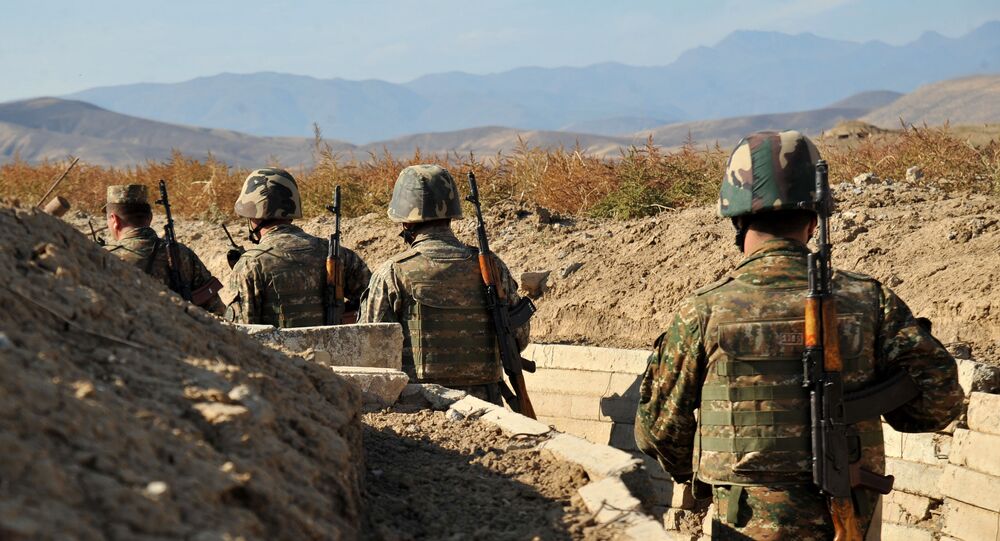 Sunday saw the escalation of the simmering Armenian-Azeri conflict over the breakaway region of Nagorno-Karabakh, with both sides blaming each other for unleashing the hostilities.

History is replete with a whole array of ethnic conflicts over disputed territories and Nagorno-Karabakh is no exception. On Tuesday, the UN Security Council announced that it plans to convene later in the day to address the ongoing armed clashes between Baku and Yerevan over Nagorno-Karabakh, an Armenian-majority autonomy which declared independence from Azerbaijan in 1991 and which is not recognised by the UN. Here's a brief insight into the issue.

History of the Conflict

Yerevan and Baku remain at odds over the history of the region, with Armenian sources insisting that Karabakh, or Artsakh in ancient Armenian, was an essential part of Armenia in the early Middle Ages. Azeri sources, in contrast, claim that Karabakh is one of the oldest historical regions of Azerbaijan and that the appearance of the term "Karabakh" pertains to the 7th century and can be loosely translated as "black garden" in the Azeri language.

The territory of modern Nagorno-Karabakh became part of the Russian Empire at the beginning of the 19th century as a result of the 1804-1813 Russo-Persian war.

At present, Nagorno-Karabakh is an administrative-territorial entity located in the Transcaucasus between Azerbaijan and Armenia. The region's area amounts to 4,400 square kilometres and its predominantly Armenian population stands at about 147,000 people.

In early May 1920, Soviet power was established in Nagorno-Karabakh, three years after the Bolshevik Revolution in Russia.

In July 1921, the ruling Russian Communist Party (RCP) decided to transfer the territory of Nagorno-Karabakh to Armenia but a day later, the RCP reconsidered the decision issue in favour of Azerbaijan, in a move that the party said was "based on the need for national peace between Muslims and [Christian] Armenians".

Nagorno-Karabakh became part of the Azerbaijan Soviet Socialist Republic (ASSR) in 1921, with broad autonomy, and in 1923, it received the status of an autonomous region, or NKAR, within the ASSR.

During the Soviet era, Armenia unsuccessfully tried to transfer NKAR to its jurisdiction, pointing to the fact that the overwhelming majority of the region's population are ethnic Armenians.

In 1987, a campaign to collect signatures for reunification with Armenia began in Nagorno-Karabakh, and in early 1988, a petition with about 75,000 (55 percent of the population) signatures was handed to the Central Committee of the Communist Party of the Soviet Union, in what caused an extremely negative reaction from the ASSR's authorities.

This was followed by the NKAR’s regional council announcing its secession from Azerbaijan in July 1988, while the USSR’s Supreme Soviet (the highest legislative body in the Soviet Union) responded by adopting a resolution on 18 July of that year, declaring the infeasibility of transferring the NKAR to Armenia.

This led to an exacerbation of the situation in September 1988, when armed clashes broke out between Armenians and Azerbaijanis, turning into a protracted conflict. In early December 1989, the councils of the Armenian Soviet Socialist Republic and NKAR passed a resolution on the "reunification" of the republic and the region, a document that was rejected as unconstitutional by the Supreme Soviet.

Subsequent armed clashes on the Armenian-Azerbaijani border in 1990 were followed by Soviet Internal Affairs Ministry troops carrying out a military operation in Nagorno-Karabakh with the aim of disarming the "illegal Armenian armed groups".

After the failed coup and subsequent chaos in the Soviet Union in 1991, the independence of the newly created Nagorno-Karabakh Republic was proclaimed by local council in September of that year, in what was rejected by Baku as an illegal move.

The developments led to the beginning of an armed confrontation between Armenia and Azerbaijan (once again independent states after the collapse of the USSR in December 1991) for control over the region, which lasted for three years until 1994, claiming the lives of at least 15,000 and wounding about 25,000 more.

Hundreds of thousands of people were displaced as a result of the conflict, which formally ended on 5 May 1994, when the three sides signed an armistice agreement that actually stipulated Azerbaijan losing control over Nagorno-Karabakh.

New Round of Confrontation

In November 2014, relations between Baku and Yerevan deteriorated after the Azerbaijani military shot down an Armenian Mi-24 helicopter in Nagorno-Karabakh that reportedly tried to attack the Azeri military's positions, in an escalation which finally resulted in the beginning of large-scale hostilities in the disputed area on 2 April 2016.

Armenia's Defence Ministry reported "offensive actions" by Azerbaijan involving tanks, artillery, and aircraft, while Baku insisted that the use of force was retaliation for the Armenian side's use of mortar shelling and machine gun fire.

© Sputnik / Дмитрий Астахов
Armenia's Prime Minister Says Yerevan May Recognize Nagorno-Karabakh's Independence
On 5 April 2016, the Defence Ministry of the unrecognised Nagorno-Karabakh Republic announced that they had reached an agreement on a ceasefire in the conflict zone. This was followed by Azerbaijan announcing a halt to hostilities and Armenia citing efforts to prepare a bilateral armistice deal.

The fresh escalation in the Nagorno-Karabakh conflict dates back to mid-July 2020, when shelling on the Armenian-Azerbaijani border led to casualties on both sides, who continue to blame each other for new tensions.