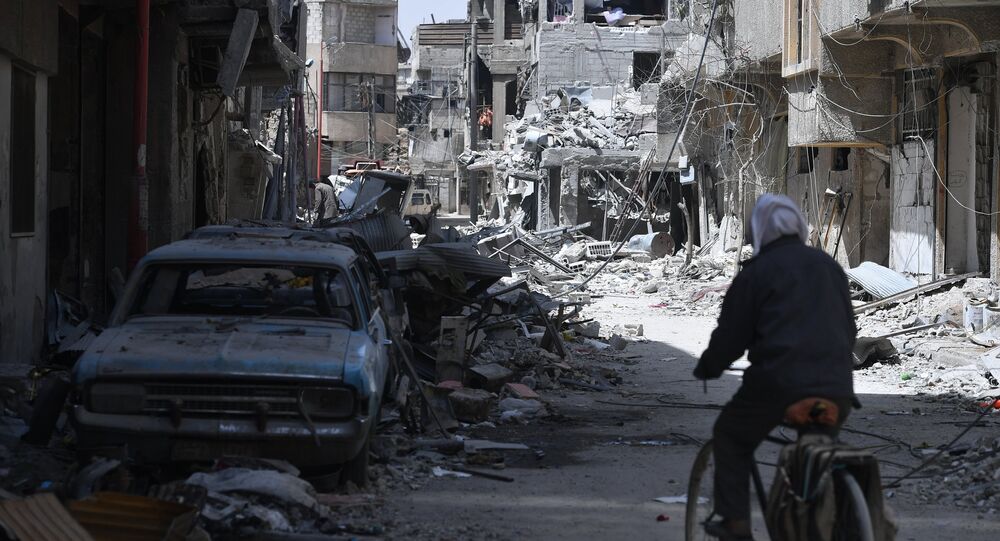 UNITED NATIONS (Sputnik) - A former lead investigator from the Organisation for the Prohibition of Chemical Weapons (OPCW), Ian Henderson, said the final report of the Fact-Finding Mission (FFM) into the alleged use of toxic chemicals in an attack in Douma, Syria, in 2018, may not reflect what happened on the ground.

Henderson was speaking at an informal meeting of the UN Security Council, organised by the Russian Mission, to openly discuss the treatment of the Syrian chemical dossier, in contrast to traditionally closed gatherings of the council on the issue.

"I speak for myself, but I know there are other Douma FFM inspectors who hold the similar concerns that I do about the manner in which the investigation was controlled, locked-down… [as well as] the findings reflected in the final FMM report", Henderson said. "We believe that there is more than sufficient information out there today that has demonstrated our points that the findings of the FFM report on Duma may not reflect the actual situation".

Henderson said the launching of a transparent technical inquiry aimed at clarifying the actual course of events in Douma in 2018 is justified, given the scope of the available information and facts on the alleged incident.

"And this needs to be done in a way that demonstrates scientific rigour and integrity because that currently has not been done", he said. "perhaps, more importantly, we continue to hope that there's someone who's willing and able, someone who has the courage to do something about this".

The OPCW concluded that chlorine was most likely used in the suspected April 2018 attack on the city, which lies on the northeastern outskirts of the Syrian capital. This led the United States, France and the United Kingdom to launch missile strikes on Syrian targets.

The OPCW relied in its probe on data provided by the White Helmets, a rebel-linked group that bills itself as a volunteer rescue force.

However, the group has faced severe criticism from the Syrian and Russian governments who accuse the organisation of supporting terrorists and staging provocations involving chemical weapons aimed at justifying potential foreign interventions.

In December 2019, whistleblowing website WikiLeaks made public documents from the OPCW on the accuracy of the investigation in Douma.

One is an internal email exchange between a senior OPCW official, Chief of Cabinet Sebastian Braha, and his colleagues regarding a technical assessment by Henderson into allegations that the Syrian government had dropped two gas cylinders in a civilian area of Duma from an aircraft.

Henderson, who was assisting the FFM with information collection in Douma, in particular, found that all evidence from the ground suggest that cylinders were placed there manually and, given that the area was not controlled by Damascus at the time, most likely by no one else but the anti-government rebels.

This is what Ian Henderson (#Douma FFM sub-team leader) was trying to explain about the location of L2 cylinder. The chlorine would had to have travelled down the stairs, out the door onto the street and then re-enter the building to make it's way to the basement. pic.twitter.com/ZEl2tmGeal

The final report of the OPCW has no mention of these findings. Henderson faced pressure from the OPCW leadership and was eventually fired.