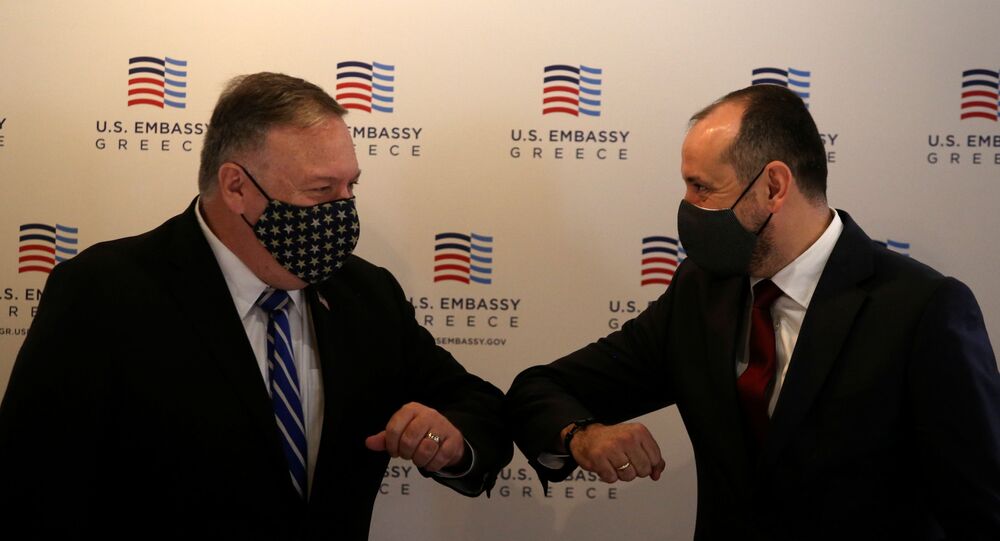 US-Greece Relations at 'All-Time High', Pompeo Says Upon Arrival in Athens for Talks

MOSCOW (Sputnik) - US Secretary of State Mike Pompeo has said on Monday that Washington's relations with Athens are at an "all-time high" before holding talks with his Greek counterpart Nikos Dendias aimed at strengthening bilateral ties further.

Pompeo and Dendias agreed to strengthen their bilateral relationship further during a review of the US-Greece Strategic Dialogue ahead of a planned meeting in Washington in 2021, according to a joint statement.

Additionally, both parties discussed the ongoing tensions in the eastern Mediterranean Sea caused by the earlier presence of Turkish seismic exploration vessels in waters Greece claims to be part of its exclusive economic zone.

"The United States and Greece shared views on the Eastern Mediterranean and reaffirmed their belief that maritime delimitation issues should be resolved peacefully in accordance with international law. In this regard, the United States welcomed Greece’s confirmed readiness to engage with other countries in the region to achieve maritime delimitation agreements through dialogue and in accordance with international law", the joint statement of Pompeo and his counterpart Nikos Dendias read.

Pompeo and Dendias also expressed their desire to utilise the so-called 3+1 format (Cyprus, Greece, Israel, and the United States) to promote peace and stability in the eastern Mediterranean.

​The US and Greece will also look to enhance their bilateral relationship in the defence, law enforcement, trade, and energy sectors, according to the joint statement.

Pompeo has previously said that the United States is "deeply concerned" over Turkey's actions in the Eastern Mediterranean, and has urged both sides to defuse tensions and begin diplomatic discussions.

The Turkish-Greek tensions in the Eastern Mediterranean escalated after Ankara began exploration drilling in the Greek-claimed waters in early August. Greece considers this territory to be its exclusive economic zone and has mobilised its armed forces to high alert, vowing to protect its sovereign rights by all means.

Turkish vessels conducted seismic exploration surveys near the Greek island of Kastellorizo this past summer, which drew the ire of Athens. The Greek armed forces were placed on high alert in response, although Turkey's Oruc Reis vessel has since returned to port.