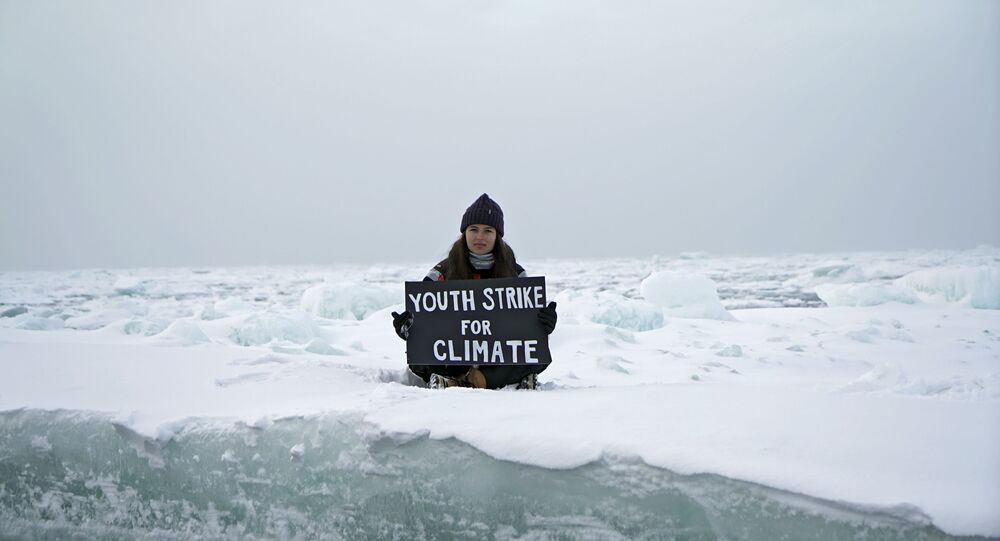 In August 2019, the world’s best-known teen environmentalist Greta Thunberg made a grand carbon-neutral journey to attend September's UN Climate Action Summit in New York. After floating across the Atlantic Ocean for 15 days, the Swede appeared in front of the assembly to lambast the world’s leaders with her famous “how dare you” speech.

A young climate change activist from Britain made an eye-catching trip to the Arctic this week as a part of the "Youth Strike" movement launched by Greta Thunberg.

The photos of Mya-Rose Craig’s solitary protest were shared on her Twitter account, as the 18-year-old campaigner was pictured floating in the Arctic waters, just north from the Norwegian archipelago of Svalbard.

Sitting on the ice floe, Craig was holding a "Youth Strike for Climate Change" sign inspired by the Thunberg-initiated Fridays for Future campaign, as the Brit tried to bring the world’s attention to the issue of global warming.

“Time is running out. The Arctic is melting and could be gone by the time I’m in my 30s, and we need our leaders to make a decision now,” she captioned her pictures. “I did the most northerly climate strike ever in the Arctic to convey my desperation and the urgency of the issue.”

According to the activist, dubbed by some as "Britain's answer to Greta Thunberg", it took her three weeks to reach the Arctic sea by road and boat.

Time is running out. The Arctic is melting, and could be gone by the time I’m in my 30s, and we need our leaders to make a decision now.

I did the most northerly climate strike ever in the Arctic to convey my desperation and the urgency of the issue. pic.twitter.com/qyEiz0T7iw

​Thunberg, 17, made a no-less-extreme trip last year, when she climbed into a racing yacht to sail across the Atlantic Ocean to the United States, in a bid to attend the UN Climate Change Summit. Her supposedly carbon-neutral voyage lasted 15 days as she tried to demonstrate the importance of reducing emissions to stop global warming.

After reaching stable ground, Thunberg sent some firing shots towards the global leaders with her viral “how dare you” address, while accusing politicians of inaction when it came to climate change. Some, including Canadian Prime Minister Justin Trudeau, rushed to assure Thunberg of forthcoming action, such as a pledge to plant two billion trees by 2030, which, however, has so far failed to materialise.

On Friday, the climate change strikes, pioneered by Thunberg in 2018, resumed in some of the world's capitals after a break caused by the coronavirus lockdown. The famous environmentalist herself was the one to lead a socially distanced demonstration in her native Sweden.