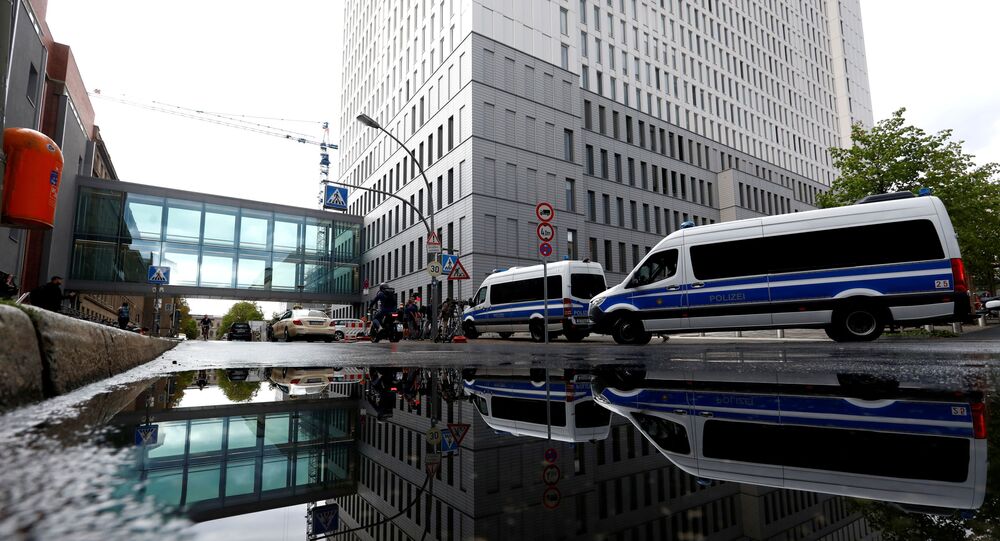 German authorities formally transferred information related to Russian opposition figure Alexei Navalny's alleged poisoning to the Organization for the Prohibition of Chemical Weapons in early September, with the OPCW announcing last week that it would be providing 'technical assistance' to Berlin in the case after a request.

The Russian Foreign Ministry has accused the OPCW of acting in an improper and biased manner in its handling of the Navalny 'poisoning' case.

"The role of the OPCW's Technical Secretariat in this situation is quite questionable. Of particular significance is the fact that since OPCW Director-General Mr. Fernando Arias received information on the alleged 'poisoning' of Mr. Navalny from the German side on 3 September 2020, the Technical Secretariat has taken some 'preparatory measures' in anticipation of a request from Germany and has been maintaining permanent contact with Berlin," the ministry said in a statement released Friday.

"This circumstance clearly exposes the warped judgement and political bias of the Technical Secretariat, which never mentioned its active cooperation with Berlin when communicating with Russia's Permanent Mission to the OPCW," the ministry suggested.

Accusing the OPCW of providing "assistance" to Germany in the Navalny case without a proper mandate to do so, Moscow charged the agency's Technical Secretariat of "overstepp[ing] its mandate and violat[ing] the Chemical Weapons Convention," which "provides no role for the Technical Secretariat in pre-investigative and investigative proceedings carried out by state parties within the framework of their legislation."

The OPCW formally announced that it would be providing Germany with assistance in the Navalny case on 17 September, noting that it had "adopted specific preparatory measures to be ready to respond to any request from Germany" soon after being informed about Navalny's alleged poisoning by a Novichok group nerve agent on 3 September. The agency insisted at the time that along with Germany, "contact has also been maintained with other state parties to the Chemical Weapons Convention."

© AP Photo / Peter Dejong
FILE - This Friday May 5, 2017 file photo shows the headquarters of the Organisation for the Prohibition of Chemical Weapons (OPCW), The Hague, Netherlands

In its statement on Friday, the Foreign Ministry also accused Germany and its NATO allies of trying to use the OPCW as a means to interfere in Russia's internal affairs, suggesting that "the demands made by Germany's leaders and their NATO allies for Russia to 'assist with' the [Navalny] investigation under the auspices of the OPCW is nothing less than an attempt to undermine the fundamental principles of the Chemical Weapons Convention, and to use this international structure to interfere in the internal affairs of a state party to the Convention, under whose direct jurisdiction the [Navalny-related] events in Tomsk and Omsk fall."

The ministry also returned to the details of the Navalny case itself, noting that despite the allegations that he was poisoned by a highly deadly nerve agent, the opposition figure himself miraculously became the only person to fall ill.

Everyone else, including people at the hotel where he stayed, at Tomsk's airport and on board his Moscow-bound flight, did not suffer any injuries. "This did not happen, apparently, because of some happy coincidence. In short, amazing things were taking place which border on fantasy," the ministry suggested.

Moscow stressed that the German side's concealment of information about the water bottle allegedly containing traces of Novichok which was taken from the hotel room in Tomsk where Navalny stayed by his entourage signals the politically motivated nature of the entire case. In the ministry's view, such "evidence," and the manner in which it was obtained, is highly dubious from a legal point of view.

The Foreign Ministry also accused Germany of actively resisting efforts by the Russian side to initiate a pre-investigation probe into the Navalny case, saying that Berlin is thereby violating its obligations under the 1959 Convention on Mutual Legal Assistance in Criminal Matters, and preventing the truth from being established under Russian law.

Echoes of 'Chemical Weapons Use' Claims From Syria, UK

© REUTERS / Mohamed Abdullah
OPCW Whistleblower’s Syria Gas Attack Hoax Testimony Raises Questions About Similar Incidents
According to the ministry, Moscow has taken a "transparent position" on the Navalny case from the very beginning, allowing for him to be transferred to Germany for treatment at the request of his relations, with the doctors who saved his life in Omsk openly passing on all the data they collected about Navalny's condition and expressing willingness to continue cooperation.

In return, Moscow noted, the Russian side was met with "megaphone diplomacy" by the German side, with the German government refusing any cooperation with Moscow, and almost immediately claiming that Navalny was poisoned, despite conclusions to the contrary by Russian toxicologists before his transfer to Berlin.

"Germany's actions were so finely tuned that they began to raise questions as to whether we are dealing with another statement on the [well-worn] topic of the mythical use of chemical weapons, this time not in Syria or the UK, but in Russia itself," the ministry suggested, referring to previous claims of chemical weapons use in Syria which served as a pretext for US, British and French bombing of the country, and the alleged 'poisoning by Novichok' of a former Russian spy in Salisbury, England in March 2018 which sent Russia-UK relations into a tailspin.

© REUTERS / SOCIAL MEDIA
Navalny Thanks Russian Pilots, Doctors Who Provided Immediate Medical Care During Illness
Alexei Navalny fell gravely ill on a domestic flight from the Siberian city of Tomsk to Moscow on 20 August, with the commercial plane carrying him making an emergency landing in Omsk, where he was transferred to local hospital and put into an medically induced coma to save his life. On 22 August he was flown out of Russia to a clinic in Berlin.

In early September, Germany announced that a chemical analysis by the Bundeswehr had determined that he had been poisoned by a "Novichok" group nerve agent. Moscow vigorously denied the claim, citing a lack of evidence, and the fact that testing by Russian doctors before his flight to Germany showed no trace of any poisons. Navalny was discharged from the Berlin clinic on Tuesday.

Navalny has been a key figure of Russia's liberal, pro-Western opposition for more than a decade, and is arguably the best-known Russian opposition politician in the West. In Russia, he is better known for his work as a blogger and his investigations into alleged corruption by Russian government officials and businessmen. Navalny and his brother Oleg were convicted of money laundering and defrauding their business partners in 2014, with the politician receiving a three-and-a-half-year suspended sentence for the crime, while his brother was made to serve the full sentence.