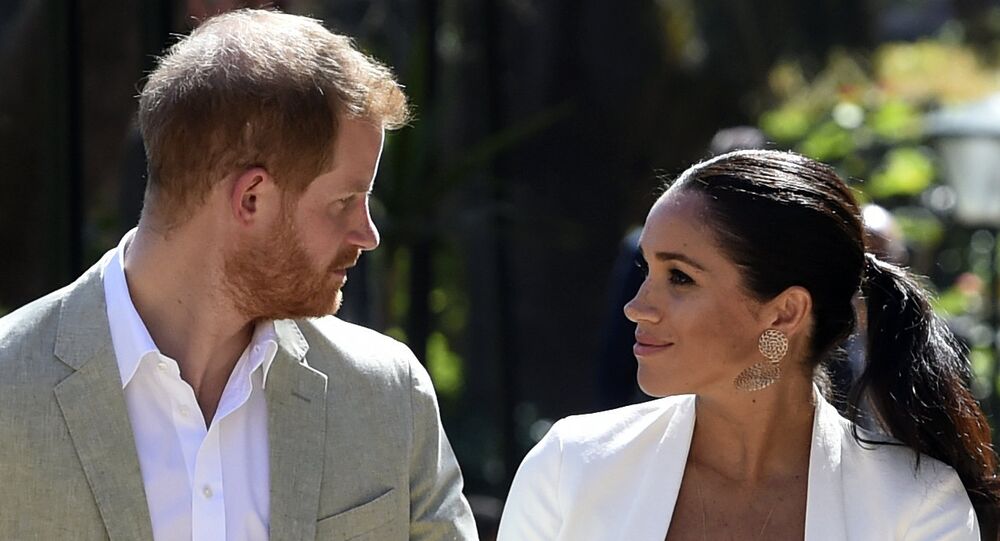 Details about the cost of Prince Harry and Meghan Markle’s last official tour before they stepped down as working royals surfaced as the palace's annual accounts revealed the palace’s total travel bill in 2019/2020 amounted to £5.3 million.

Prince Harry and Meghan Markle’s last official tour as members of the Royal Family raked up a travel bill that cost UK taxpayers close to a quarter of a million pounds, according to official palace accounts published on Friday and cited by The Daily Mail.

At the time, the Duke and Duchess of Sussex had taken their four-month-old baby son Archie Mountbatten-Windsor with them on a South African tour in September 2019.

Prince Harry then also proceeded to travel to Angola, Malawi and Botswana on his own.

Details about the sky-high travel bills by the Duke and Duchess of Sussex were unveiled as part of the royal palace report and accounts published on 25 September, which show the total royal travel bill in 2019/2020 was £5.3 million, which is a 15.2 percent increase on last year's £4.6 million.

The sky-high cost of Prince Harry and Meghan Markle's tour of Africa
These two....can we send them back? https://t.co/cUqsXz1Pg4

​Apprehending a barrage of criticism, sources were cited by the outlet as justifying the costs accumulated by the Duke and Duchess of Sussex.

Underscoring that the African tour had been a key visit approved by the Foreign Office, the sources said:

“The Duke and Duchess of Sussex undertook over 20 engagements, bringing attention to a number of worthwhile causes, in particular, raising awareness of the work and the legacy of the Halo Trust [an anti-landmine charity championed by Princess Diana]… The visit, as an official visit funded by the Government, fulfilled the objectives that were set out for it.”

The colossal travel bills were slammed by the anti-monarchist campaign group Republic. The group emphasised that the released figures fell short of lifting the lid on the true annual cost of the monarchy. Republic estimated the latter at £345 million.

“These figures don't disclose the daily abuse of money on shorter trips around the country, taking helicopters when they could go by car, driving when they could go by train. A 15 percent increase in travel costs when hospitals can't deliver the very best care to every person in need, when teachers are struggling to pay for the necessary books and equipment and the police are stretched to breaking point is scandalous,” said spokesman Graham Smith.

Meanwhile, on Monday Buckingham Palace confirmed that the Duke and Duchess of Sussex had paid an 'undisclosed' sum upfront for the rental and refurbishment of their Windsor property, Frogmore Cottage.

Earlier, there had been calls for Prince Harry and Meghan Markle to pay back the £2.4 million in taxpayers' money spent renovating the place, which the couple decided to maintain as a permanent base in the UK, alongside their mansion in California, reportedly worth £11 million.

Netizens rushed online to discuss the released travel bills by the royals. Some slammed the South Africa tour by the Sussexes as an “ego trip”.

Well it was an ego trip.

No sympathy, when you see how much Harry and Meghan spent on the Africa trip, Princess Anne on flights no wonder they made a loss. Why is the tax payer footing this bill. Isn't it time for us to let the monarchy pay it all themselves.

Well, when you’re rich... and God has blessed you with deep pockets. Harry and Meghan have paid the rent for Frogmore “ a couple of years” in advance....Damn, the bills for private charter travel for some other royals are astronomical. Talk about that!!!

​Others defended Prince Harry and Meghan Markle, and pointed out that they were being “scapegoated”.

At least Harry and Meghan paid back, because for the other Royals : Cambridge, Kent, Beatrice, Eugenie... The Queen is the one to pay their Rent lol

A 10 day royal tour- £245k vs Charles 2 day trip-£210k 🤔, £1m of taxpayers money for the Gloucesters home renovation yet Harry and Meghan was criticised for over a year for Frogmore's renovation cost 🤔, like usual Harry and Meghan are used as scapegoats 😐

In the bombshell interview, an emotional Duchess of Sussex revealed her private struggle to cope with her pregnancy and the early stages of motherhood while in the relentless spotlight of often-negative media coverage.

Meghan Markle had also suggested that Prince Harry’s family failed to ever wonder if she “was OK”.
Prince Harry also released a statement accusing the British press of a “ruthless campaign” against his wife.

Several months later, in January 2020, the Sussexes announced their decision to step down as senior working royals to seek to become financially independent and divide their time between Canada and the UK.

The couple formally stepped down as senior royals on 31 March, retaining their formal HRH titles, while no longer using them.

Prince Harry and Meghan Markle subsequently relocated to the US in July 2020, where they acquired a mansion in Santa Barbara, an affluent seaside city outside Los Angeles, California, and recently signed a multi-million-pound deal with Netflix.

Paparazzi on the Prowl as Shot of Meghan Markle, Prince Harry in Santa Barbara Valued at $250,000