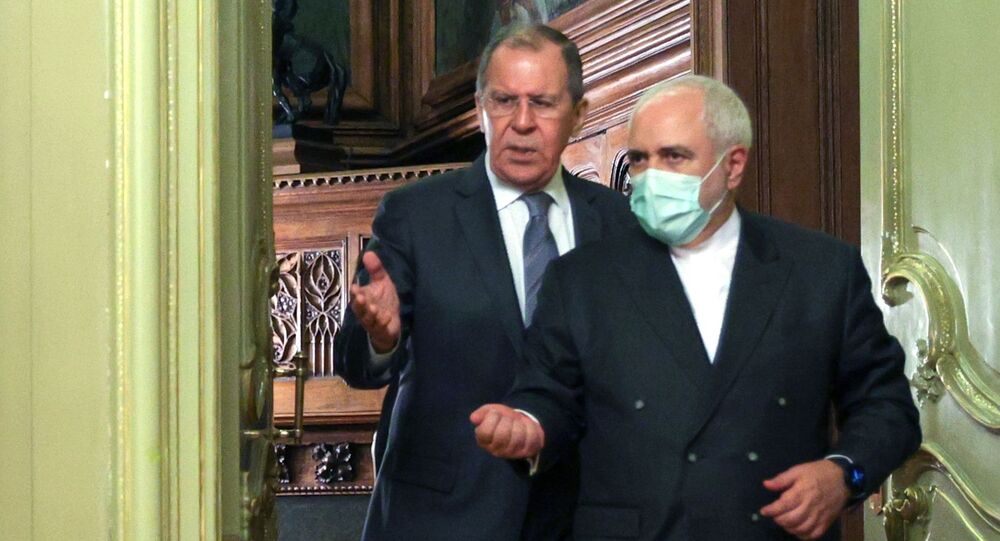 On Sunday, US Secretary of State Mike Pompeo announced a "permanent extension of the arms embargo" against Iran, threatening to punish any nation that flouts the restrictions and continues to do business with the Islamic Republic with secondary sanctions.

Russia and Iran have rejected US efforts to introduce a "permanent" arms embargo against Tehran, and will continue their economic cooperation, including in the field of nuclear energy, notwithstanding any sanctions threats, Russian Foreign Minister Sergei Lavrov has said.

"We discussed in detail the situation surrounding the Joint Comprehensive Plan of Action to resolve the situation around Iran's nuclear programme, where we stressed that Moscow and Tehran, like the entire international community, categorically reject US ambitions to impose some kind of indefinite arms embargo," Lavrov said, speaking at a press conference in Moscow after talks with Iranian Foreign Minister Mohammad Javad Zarif on Thursday.

"We have heard the US statement that, despite the will of the entire international community, they will proceed from the premise that the United Nations Security Council's sanctions against Iran would be restored at Washington's whim. These attempts using illegal means have no prospect of succeeding," Lavrov added.

"We agreed to continue the implementation of major joint investment projects, first and foremost in the sphere of energy, including nuclear power, as well as transportation and industrial cooperation," the Russian foreign minister stressed.

Lavrov also confirmed that that the Russian-Iranian commission on trade and economic cooperation would meet in Russia before the end of the year.

Zarif arrived in the Russian capital on Thursday to discuss bilateral relations, the nuclear agreement and regional matters of joint concern.

Lavrov's comments follow a statement by US Secretary of State, Mike Pompeo, last week that "virtually all UN sanctions have returned on Iran," including "a permanent extension of the arms embargo."

EU Opposes US Santions Against Iran

In a rare sign of transatlantic disunity, the European Union rejected the US announcement, with EU foreign affairs chief Josep Borrell stressing that Washington has no right to restore sanctions on Iran unilaterally on the basis of an agreement they withdrew from.

The Trump administration scrapped its commitment to the Joint Comprehensive Plan of Action nuclear deal in May 2018, slapping Tehran with tough energy and banking sanctions and threatening to introduce secondary sanctions against countries that continued to do business with the Middle Eastern nation.

Earlier this year, Washington also began looking for ways to extend the UN arms embargo indefinitely against Iran. It was introduced in 2010 and is set to be lifted next month, in accordance with the nuclear deal.

On Monday, a commander from Iran's Revolutionary Guard Corps announced that as well as enabling the purchase of foreign weapons, the lifting of the UN arms embargo will allow Tehran to sell its weapons abroad. The Islamic Republic has made major strides in the creation of advanced home-grown military equipment in recent years, building a range of missiles, drones, and air defence systems, including a missile system which shot down a $220 million US surveillance drone over Iranin airspace in the Strait of Hormuz last year.