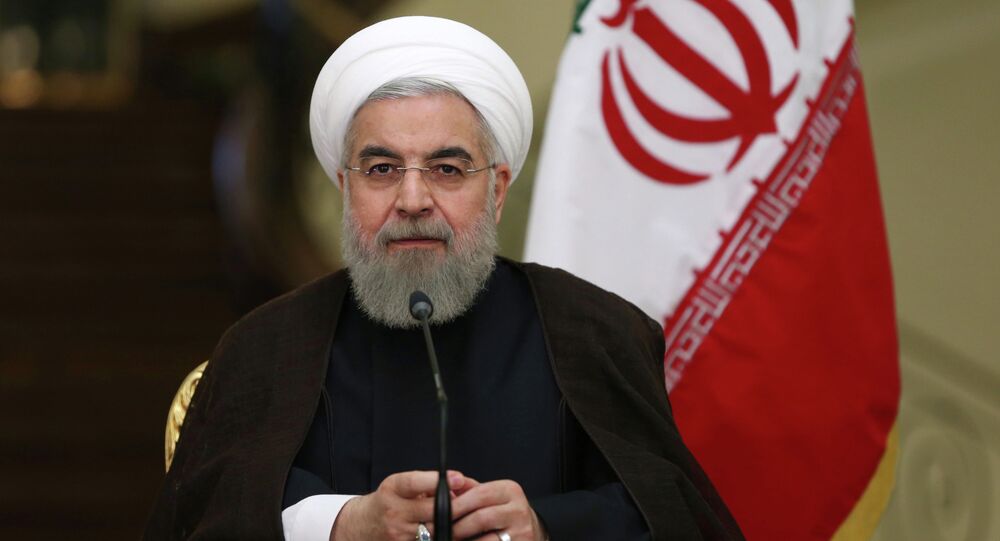 US Facing Defeat in Its Sanction Move Against Iran, President Rouhani Says

On Saturday, US Secretary of State Mike Pompeo announced that all UN sanctions against Iran were "back in effect" under the “snapback” mechanism of UN Security Council Resolution 2231.

Iran's President Hassan Rouhani said in a televised speech on Sunday that the US is facing defeat in its recent sanctions decision against the Islamic Republic.

Additionally, he signalled Iran’s readiness to fully adhere to the 2015 Iran nuclear deal, also known as the Joint Comprehensive Plan of Action (JCPOA), if all other signatories do so.

The remarks came after UN Secretary-General Antonio Guterres stated that he cannot take any action on the US declaring the reinstatement of all UN sanctions against Iran due to what he described as uncertainty related to the issue.

“There would appear to be uncertainty whether or not the process […] was indeed initiated and concomitantly whether or not the [sanctions] terminations […] continue in effect. It is not for the Secretary-General to proceed as if no such uncertainty exists”, Guterres pointed out, according to his letter to the UN Security Council, seen by Reuters.

The statement followed US Secretary of State Mike Pompeo announcing that all the UN sanctions against Iran are coming into force and that Washington is ready to punish those UN Security Council members that are against the sanctions.

Pompeo welcomed "the return of virtually all previously terminated UN sanctions on the Islamic Republic of Iran" under the so-called snapback mechanism of UN Security Council Resolution 2231. The mechanism stipulates punitive measures if Iran violates its obligations under the JCPOA.

© AP Photo / Alexander Zemlianichenko
US Sanctions Unlikely to Hinder Arms Sales to Iran Once UN Embargo Expires – Zarif
Commenting on the move, EU High Representative for Foreign Affairs Josep Borrell stressed that the US has no right to unilaterally restore international sanctions on Iran on the basis of an agreement it has withdrawn from.

The US re-imposed tough sanctions on Iran as part of President Donald Trump’s campaign of so-called maximum pressure on the Islamic Republic, which began after Washington unilaterally withdrew from the JCPOA in May 2018 in a move that prodded Iran to start suspending its JCPOA obligations exactly a year later.