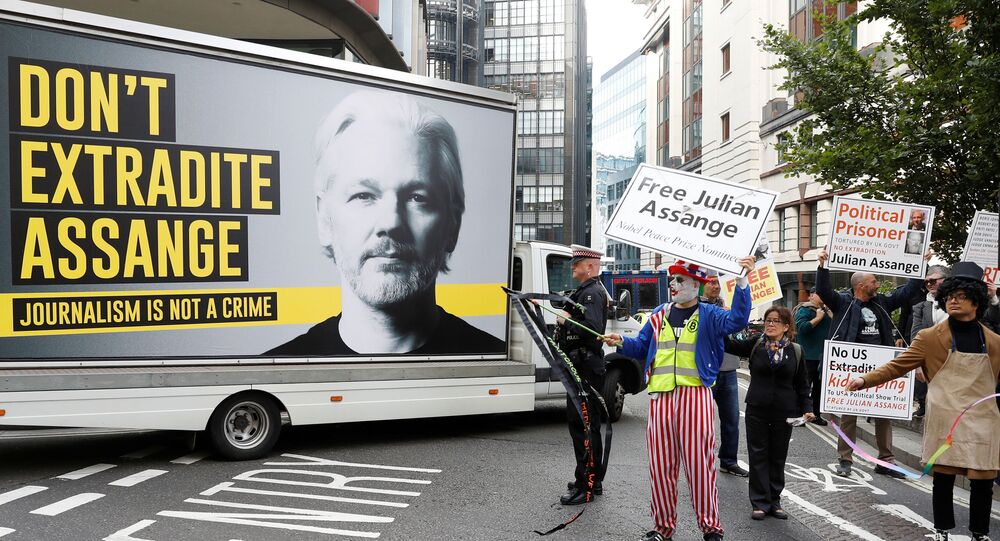 LONDON (Sputnik) - Two witnesses for the defence of Julian Assange said on Wednesday in separate statements before the London Criminal Court overseeing his extradition hearing that Wikileaks revelations caused no harm to anyone and that the whistleblower was adamant in not publishing unredacted documents.

"Part of the agreement with Wikileaks was that Assange insisted that we handle communications and the material securely," John Goetz, an American-born investigative journalist that worked with Assange on the disclosure of the classified information, told the court over a video link.

US prosecutors repeatedly claimed during the trial that Assange is not wanted by the US for the publication of classified information on the US wars in Iraq and Afghanistan, but for having put the lives of local informants whose names were mentioned in the leaked reports at risk.

Goetz, who was working with the German newspaper Der Spiegel at the time of the Wikileaks releases in 2010-2011, said he remembered being annoyed at the time by Assange’s constant reminders to be secure.

"I am aware that when the partners published their respective stories on July 25, 2010, that Wikileaks delayed the release of 15,000 documents as part of what Assange called ‘the harm minimization process’," he said.

The witness also said that he has no reason to believe that the whistleblower was responsible for knowingly publishing material that could harm other persons.

The second witness the defence called to the stand on Wednesday was Daniel Ellsberg, the person that leaked a secret government study on the Vietnam war known as the Pentagon Papers in 1971, compared his case with the Wikileaks releases, as they both revealed war crimes and illegalities being committed by the US military.

"My own actions in relation to the Pentagon Papers and the consequences of their publication have been acknowledged to have performed such a radical change of understanding. I view the WikiLeaks publications of 2010 and 2011 to be of comparable importance," he said.

When the prosecutor told him that the only charges against Assange are limited to obtaining and publishing classified documents, Ellsberg replied that "there are also 15 other counts," referring to the 18 espionage and computer misuse charges the US Department of Justice has brought against the whistleblower, who faces 175 years in jail if convicted in the United States.

The witness also said there is no evidence that deaths had occurred as a result of Wikileaks revelations.

At one point, Assange interrupted the witness’ cross-examination from his stand behind a glass panel and the judge overseeing the extradition case told him to keep quiet or she would have him removed from the courtroom.

The hearing to decide whether Assange should be sent to the United States resumed on 7 September at the London Central Criminal Court, after six months of delay due to the COVID-19 pandemic.

The WikiLeaks founder, who has been locked up at the maximum-security prison of Belmarsh since his arrest at the Ecuadoran embassy in London in April 2019, is attending the trial from behind a glass panel, away from his defence team.