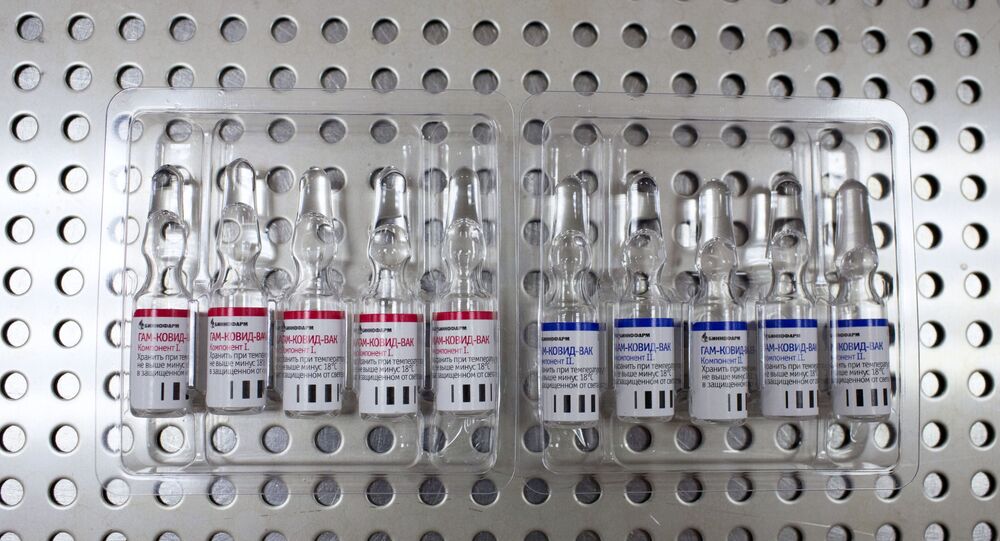 Russia Getting Requests for Sputnik Vaccine From Africa, Will Consider

MOSCOW (Sputnik), Ekaterina Ivanova - Russia has been getting requests for its coronavirus vaccine from Africa and will address them, but has to attend to its own people first, Russian Ambassador-at-Large Oleg Ozerov, who serves as the head of the secretariat for the Russian-African partnership forum, told Sputnik.

"Of course, we received such requests [about supplying Russian vaccine to Africa]; they have been coming and they will continue coming, but we have one priority, which is our country's population. But clearly we will work with this issue with regard to the African states as well", the diplomat said.

Sputnik V vaccine has recently entered post-registration trials. About 55,000 Moscow residents have expressed readiness to take part in them.

© REUTERS / Dado Ruvic
A woman holds a small bottle labeled with a "Vaccine COVID-19" sticker and a medical syringe in this illustration taken April 10, 2020.

The drug was developed by Russia's Gamaleya National Research Centre of Epidemiology and Microbiology and the Russian Direct Investment Fund. On 11 August, it became the world's first vaccine to get officially registered by a government.

The diplomat also noted that Russia is ready to cooperate with strategic partners in Africa, and Africa-BRICS format has great potential for that, Russian Ambassador-at-Large Oleg Ozerov, who serves as the head of the secretariat for the Russian-African partnership forum, told Sputnik.

"Competition is vital for people to run faster, work more effectively, decrease costs and boost productiveness. But that does not at all mean that we cannot and must not cooperate – especially with our strategic partners China and other states. We have a very good format and very good basis: it’s the cooperation between the African continent and BRICS countries", the diplomat said.

Ozerov remarked that each BRICS country had its strength and the cooperation would prevail over the competition.

"Common projects exist and they are implemented – in particular, the New Development Bank, which is the bank of BRICS, opened its office in Johannesburg. Here you have the ground for the development of our partnership on the continent", Ozerov said.

BRICS are the five largest emerging economies — Brazil, Russia, India, China, and South Africa. The latter is both a BRICS country and an African state.