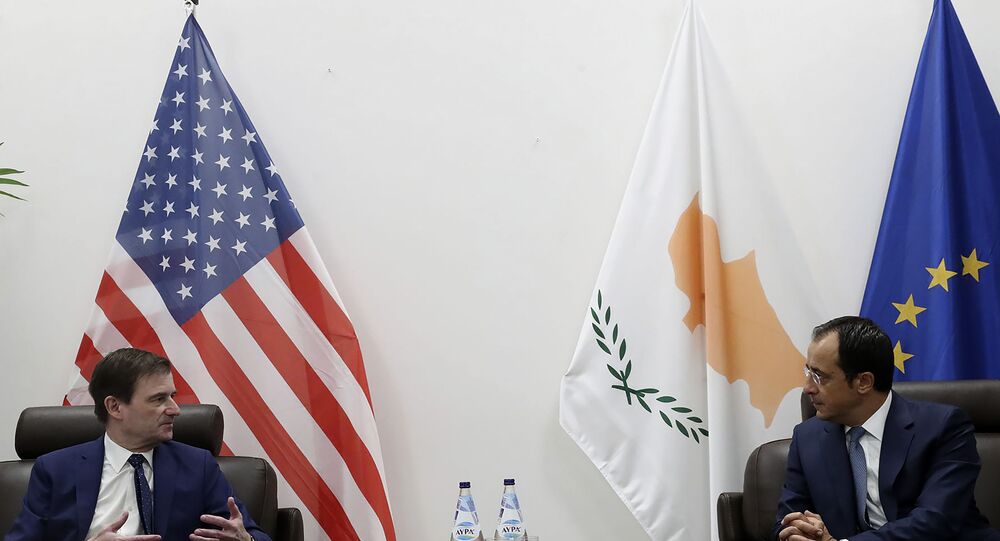 MOSCOW (Sputnik) - Cyprus expects Turkey to adjust its position on the island as a solution to the Cyprus problem should at last render the island free from obsolete post-colonial security arrangements and foreign guarantors, Cypriot Foreign Minister Nikos Christodoulides said in an interview.

"We, therefore, expect that the position of all concerned, in particular Turkey, will be aligned with contemporary realities and international law, and will respond to the fundamental expectation of the people of Cyprus for a genuine independent and sovereign State, not a protectorate that will be a hostage of foreign guardians", Christodoulides said.

He has touched upon the issue of holding a referendum, saying that any solution to the Cyprus conflict has to be put for a vote of the island's residents.

Earlier in the week, Ankara criticised the decision by the United States to partially lift a 33-year arms embargo against Cyprus, claiming it ignores equality and balance between the island's Greek and Turkish populations, and warning that it may have to take counter measures to guarantee security of the Turkish Cypriots, citing its role as a guarantor country. The US move comes as tensions escalate between Turkey and Greece and Cyprus over rights to look for energy resources in eastern Mediterranean.

Cyprus became independent in 1960 per the treaties of establishment, guarantee, and alliance. It has been divided into Greek and Turkish parts since 1974 when Ankara sent its forces to the island to allegedly protect the island’s Turkish population. In 1983, the Turkish Republic of Northern Cyprus declared its independence, without being recognised by anyone except the Turkish government.

Foreign Minister Nikos Christodoulides said that Cyprus appreciates Russia's consistent stance on the Cypriot peace process and support for Nicosia's attempts to reunite the island in the face of the Turkish political and military presence, including on the issue of former tourist area of Varosha.

"Let me take this opportunity to express our deepest appreciation for Russia’s longstanding stance and support towards Cyprus and its people in our quest to free our country of foreign occupation and to achieve a solution that reunifies the country. This support and principled stance was also upheld by Russia on the issue of Varosha", the foreign minister said when asked about possible Russian assistance in settling the issue.

The minister said that alleged attempts by Ankara and the Turkish Republic of Northern Cyprus to infringe in Varosha are aimed to undermine any solution to the current situation that is based on the idea of creating a bizonal, bicommunal federation.

"Against this backdrop, it is vital that the international community, particularly the permanent members of the United Nations Security Council, convey a clear, unequivocal message – as they have done through the UN Security Council press statement of 9 October 2019 and through the recent resolutions for the renewal of UNFICYP’s [United Nations Peacekeeping Force in Cyprus] mandate- that the relevant Council resolutions must be respected. In this context we would welcome and encourage Russia’s active involvement and contribution in the effort to ensure alignment with the spirit and letter embedded in UN Resolutions", Christodoulides said.

The Cypriot foreign minister added that he would update Russian Foreign Minister Sergey Lavrov on the situation with Famagusta during the latter's visit on 8 September .

"Turkey’s announced intention to proceed with changing the status of the fenced city of Famagusta, in violation of the relevant UN Security Council Resolutions, will ... be discussed", Christodoulides said.

On 27 August, the Russian Foreign Ministry affirmed Russia's readiness to provide necessary assistance to the parties to the negotiations to find a compromise on the issue of Varosha — a former resort part of the Cypriot city of Famagusta, abandoned since the Turkish invasion of 1974.

After Turkey sent its forces in 1974 to allegedly protect the Turkish Cypriot population, the island has been de facto split into two parts, with the Turkish one being recognised solely by Ankara. One of the many casualties of that arrangement is Famagusta's Varosha, a once popular destination that has turned into a ghost town. Recently, the Turkish Republic of Northern Cyprus announced plans to reopen it for tourists, despite the United Nations Security Council resolutions 550 and 789, which condemn all resettlement attempts in the area and put it under control of UNFICYP.