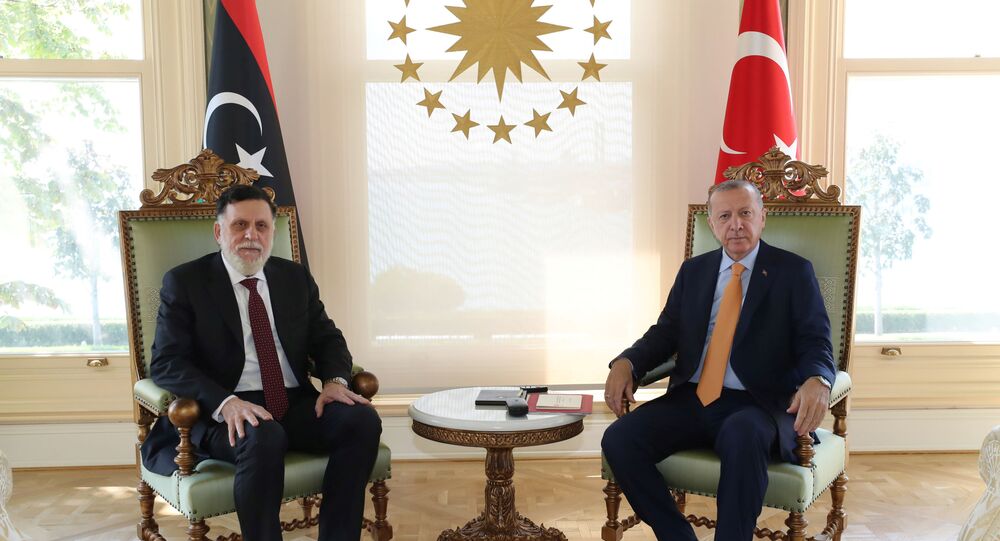 ANKARA (Sputnik) - Turkish President Recep Tayyip Erdogan and Fayez Sarraj, the head of Libya's UN-recognized Government of National Accord, have discussed ways to strengthen cooperation to protect the two countries' interests in the Eastern Mediterranean, the Turkish Presidency said in a press release on Sunday.

"President Erdogan and Prime Minister Sarraj held a productive meeting which will promote the peace, security, and prosperity of the Libyan people and the strengthening of the bilateral relationship", the press release read. "The leaders exchanged views on ways to strengthen the cooperation between Turkey and Libya's legitimate government in accordance with the memorandums of understanding they signed earlier, as well as steps to protect the rights of Turkey and Libya in the Eastern Mediterranean."

Erdogan has pledged Turkey's continuous solidarity with Sarraj's government and to pursue the immediate restoration of stability in Libya by means of preserving its political unity and territorial integrity, as stated in the press release.

"Stressing that peace and stability in Libya will also benefit its neighbors and the entire region, including Europe, President [Erdogan] added that the international community must take a principled position in this regard", the Turkish Presidency said.

Libya has been mired in internal conflict since its long-time leader Muammar Gaddafi was killed in 2011. Since then, the Government of National Accord has established itself as the power pole in the country's west with the centre in the capital city of Tripoli, while the rival Libyan National Army took control over the east with its centre in the city of Tobruk, supported by the House of Representatives.

Turkey has taken the GNA's side and deployed troops to Libya earlier this year, prompting condemnation from the international community and other parties to the Libyan conflict. Ankara has maintained that its military presence in Libya was legal as it followed a request of the UN-recognized government.

Last year, Erdogan signed a Memorandum of Understanding with Sarraj on maritime delimitation in the Eastern Mediterranean. The deal had Turkey and Libya lay sovereignty claims over designated sea areas and their bed resources.