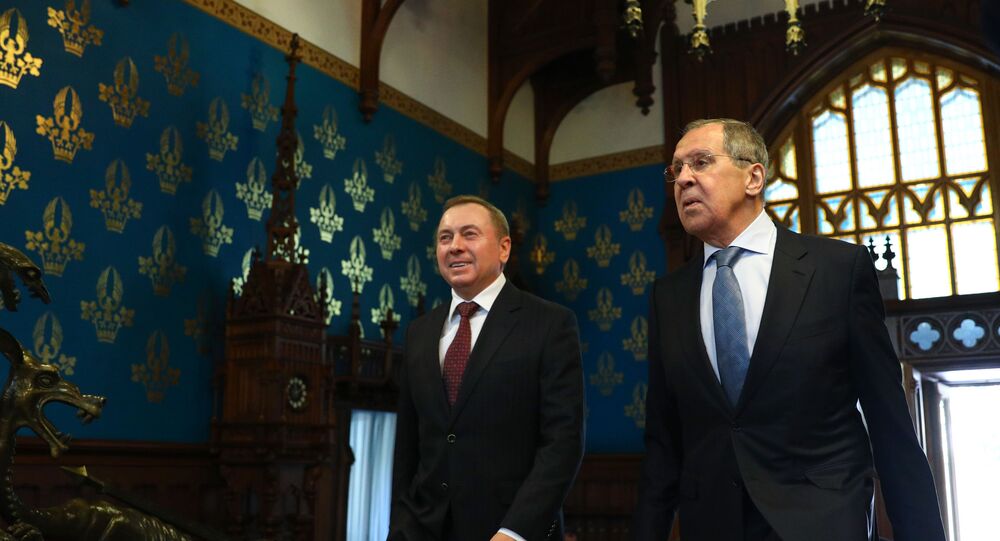 The Russian foreign minister added that Moscow recognizes the August 9 presidential election in Belarus and hopes that dialogue will help stabilise the situation in the country.

"In addition to statements made by the OSCE, we see that the EU and NATO have also been making quite destructive remarks. We also see that NATO has intensified its military activity near the borders with Belarus which are also borders of the Customs Union," Lavrov said.

Makei, for his part, said that the presidential election in Belarus has been used by foreign and domestic forces to undermine the political situation in the country.

Lavrov reiterated that Russia recognizes the presidential election in Belarus, adding that it hopes for the situation to stabilise through dialogue.

The Belarusian authorities have managed to prevent a situation that bears similarities to the 2014 Ukrainian political crisis, Makei said.

"We withstood the first strikes and did not allow the Ukrainian scenario to be implemented in Belarus. A colour revolution scenario, organized from outside," the foreign minister commented.

Belarus is against any revolutions, especially those coordinated from abroad, Makei added.

"In fact, any revolution, in my opinion, leads to bloodshed. We are categorically against any revolutionary upheavals, especially those organized from the outside, in the streets of our cities. We believe that only a calm revolutionary movement will lead to the restoration of peace, tranquillity and stability in the country, state and society," he said.

Lavrov said Russia has confirmed information that the activities aimed at destabilising Belarus were coordinated from Ukraine. He went on to say that Moscow will prevent any attempts to organise provocations in Belarus from abroad.

Meanwhile, Lavrov said that Minsk and Moscow will not address foreign interference in Belarusian affairs at international platforms.

"We are not initiating any discussions on multilateral platforms," the minister confirmed.

According to Lavrov, other states have tried to make the situation in Belarus into an international affair and thus justify forcing mediation upon Belarus, which experienced several weeks of protests after the presidential election.

The Republic of Belarus saw mass anti-government protests following the presidential election on 9 August, which brought a landslide victory to incumbent President Alexander Lukashenko with more than 80% of the votes in his favour. His key opposition rival, Svetlana Tikhanovskaya, won a bit more than 10%, according to the country's election committee. Opposition supporters took to the streets to protest against the election results, claiming that the vote had been rigged.

Lukashenko denied the allegations, adding that new presidential election would be possible only after a new constitution is adopted. He invited the people of Belarus to work on the legislation together and have their say about the constitution in a referendum. Lukashenko's supporters also organised several rallies in Minsk and other cities across the country to voice their approval of the president's policy.

He also stressed that the protests have had a negative effect on the country's economy which mostly relies on exports and has already been hit by the coronavirus pandemic. Lukashenko repeatedly said that the unstable political situation in Belarus has been deliberately created from abroad as well as from within the country and urged people to focus on their work as otherwise "nobody is going to come to us and buy what we want to sell".