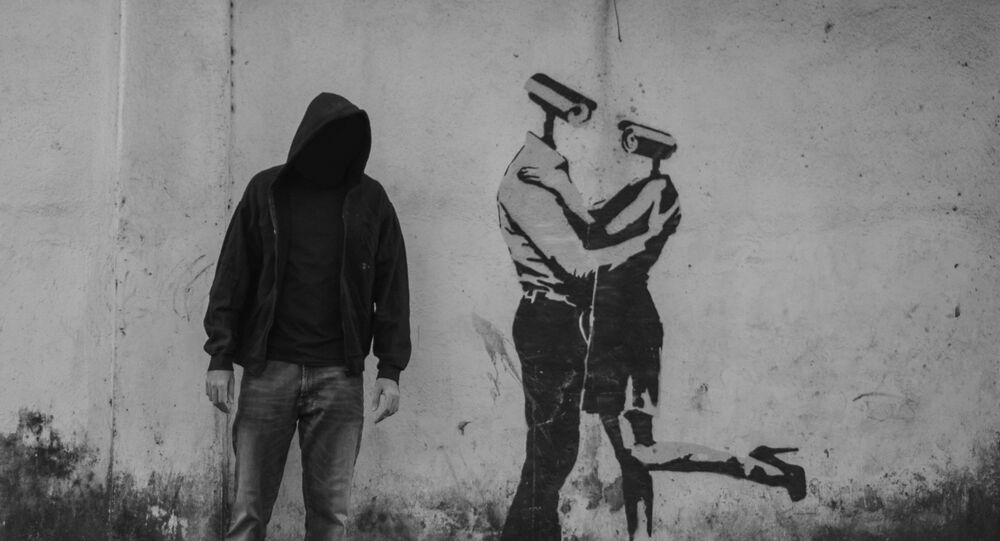 New Delhi (Sputnik): Pablo Picasso once said, “No, painting is not made to decorate apartments; it is an offensive and defensive instrument of war against the enemy.” History offers many tales of artists who have dragged people in power in front of the mirror for much-needed introspection, revolutionising how we think about issues.

An elusive street artist in India is considered by many to be a one-man army, waging a war of agitprop against politicians and eminent figures in the nation through his street art. No one can confirm who the artist is, as he remains hooded to their massive followers and goes by the handle 'Tyler', a pseudonym thought to be connected to the dystopian novel and film 'Fight Club'.

In daring moves that have been compared to the legendary graffiti superhero Banksy – a famous yet anonymous British graffiti master known for strikingly rebellious and political messages through the use of street art – work credited to 'Tyler' began appearing in 2012 as “rebellion” against social issues.

The mystery artist has found the most quirky way of calling people out, launching a guerrilla war against “shameless public figures from journalism, Bollywood and politics”, the latest series inspired by the Hollywood ‘Walk of Shame’.

While for many celebrities getting a star on the Hollywood Walk of Fame is an honour, Indian celebs are red-faced as their names are sketched alongside artistic representations of three-tier piles of poop.

"The idea behind this initiative is to connect people, by calling out the shameless public figures in the most non-violent way. When people are asked to vote between two candidates, (without having to leave their comfort zones), this becomes a win-win situation for all,” Tyler tells Sputnik.

“These people have spread hate which is beyond repairable, their only job was to divide and distract us and they got away by doing this so easily,” the artist says, explaining the idea behind the initiative.

It is a crowdsourced initiative where celebrities are nominated by Tyler on his Instagram account and participants are asked to vote for the figure most “actively spreading propaganda and hate” and who deserve to be shamed.

Those currently shamed include Bollywood actress Kangna Ranaut, known for making foul statements and name calling colleagues in the film fraternity, news anchor Arnab Goswami, and Amish Devgan of a mainstream media channel, among others.

Currently, the ruling Modi government's official spokesperson, Sambit Patra, is leading Tyler's chart to be next, against journalist Deepak Chaurasia. The two news anchors are often accused of bias and spreading propaganda, as well as displaying their inclinations in support of the  Narendra Modi-led Indian government.

“Names which are painted have multiple criminal cases filed against them. They still continue to spread hate and escape from all legal cases because of the help they receive from the ruling government. What better way to shame them, than to paint their names on a street,” says Tyler.

The guerrilla artist, also known as Mumbai's Banksy for their striking work, claims to keep their identity hidden to avoid legal repercussions and angry crowds fueled by religious fanaticism.

India has historically seen mob attacks and lynchings, with 63 such high-profile attacks occurring between 2010 and mid-2017.

“I must say Jai Shri Ram (praise for Lord Rama of the Hindu deistic pantheon) to prove my nationality,” a non-official Bart Simpson scrawls across a blackboard in a powerful message credited to Tyler concerning the lynching of Muslims for not saying “Jai Shri Ram”.

Evading attack by staying anonymous for almost a decade for his “too political” art criticising the government, Tyler says: “Threatening is the new eve-teasing”.

Tyler detailed the organised system used to intimidate artists, comedians, actors, and activists against speaking out about the regime or “Modi”.

“Trolls are young boys and girls from small cities across India who have been brain-washed into believing that nobody has the right on India, except Hindus. They are virtual soldiers for the IT CELL,” he says.

“There is a group leader for every 400-600 members, who communicates to them via Telegram and WhatsApp groups. Every member has at least 20 to 30 fake profiles. There, they are told to spam a particular account by ways of commenting hate messages or reporting the account in large numbers,” he says.

Tyler gained international recognition with wall art showing Narendra Modi and Rahul Gandhi in a tug of war over an India map and breaking it in two. The mural is said to be close to Tyler’s heart for it's clear explanation of the state of the nation over the last 74 years.

© Photo : Prashant Waydande/Tyler
Rahul, Modi in a tug of war

During the interview, Tyler rhetorically asks how many times has anyone seen Modi painted on a wall in a satirical manner, and, answering his own question, states: "'never", right?"

The self-taught artist, who has shared many images of Modi’s face morphed with North Korean leader Kim Jong-un, US President Donald Trump, and Chinese President Xi Jinping, says it is to represent the qualities the Indian prime minister has in common with the others.

“It's funny how the prime minister talks about why dissent is important for democracy but, on the other side, arrests students, lawyers and activists on a regular basis,” referring to a Modi tweet:  “I want this Government to be criticised. Criticism makes democracy strong.”
The artist says: "My art is for the people, by the people.”
...
Reddit
Google+
Blogger
Pinterest
StumbleUpon
Telegram
WhatsApp
160