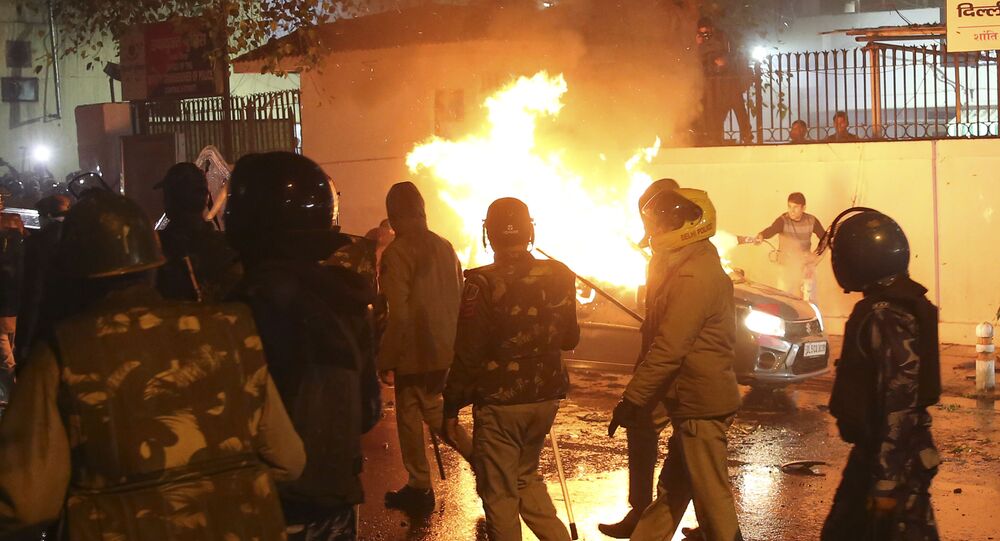 New Delhi (Sputnik): In December 2019, India was pushed to the edge as protests raged through the country, with thousands of people taking to the streets and demanding a rollback of the contentious Citizenship Amendment Act (CAA) and the National Register of Citizens (NRC). The protests became the worst communal riots in Delhi, leaving 53 dead.

About 50 Muslim former protesters in Delhi's Shaheen Bagh area, where the country’s biggest and longest protest against the Citizenship Amendment Act was held for months, have joined the Bharatiya Janata Party (BJP) to support Prime Minister Modi’s efforts in gaining the confidence of Muslim voters.

Women protesters who led the agitation at Shaheen Bagh, braving the chills of the capital’s winter in December, are now feeling betrayed and the sting of being backstabbed by their "own people".

“For three months we stayed in a tent, eating, drinking and sleeping on the side of the road with one single motive to awaken the consciousness of people of the country and fight against the black law passed by the Modi government. These people [joining the BJP] have used the name of our movement for their personal gains and betrayed us”, Ifra Anum, a protester from Shaheen Bagh, told Sputnik.

© Photo : Shweta Sharma
Shaheen Bagh-Like Anti-Citizenship Law Protests Crop up in Nooks and Corners of Indian Capital
The primary members of the protest, however, denied that any of the 50 people who joined the BJP had any “consequential” or “significant” role in the demonstrations.

The anti-CAA protests were mainly anti-government rallies with a majority of Muslim people vehemently opposing Prime Minister Narendra Modi and Home Minister Amit Shah for passing the NRC and CAA laws, considered as "anti-Muslims" and an attempt to tamper with the country’s secular identity.

The decision of Shehzad Ali and dozens other members of the anti-CAA protests to join hands with the BJP has come as a blow to protesters who dubbed their agitation as “movement against the tyranny”.

From Anti-National to BJP workers

The political leaders of the BJP denounced the anti-CAA protesters as “anti-nationals”, “Pakistanis”, “rapists”, and raised slogans such as “shoot the traitors”.

“These people will enter your house, will abduct your sisters and mothers, rape them, kill them”, BJP parliamentarian Parvesh Verma said about the Shaheen Bagh protesters.

Similarly, in January 2020, federal Minister Anurag Thakur raised the slogan “shoot the traitors” from a stage during a Delhi election campaign rally.

“The deserters have used our protest. On the other hand, we are not able to understand the policy of BJP. People whom they (the BJP) once termed anti-national, are now being inducted to the party. Why are traitors being invited to the party”, asked one of the main organisers of the Shaheen Bagh protest, while speaking to Sputnik on condition of anonymity.

He held that these "deserters" cannot sabotage the movement as the protest was not led by a single face, but the anger of hundreds of people that got them onto the streets.

​“It is a conspiracy by BJP to malign the movement”, added the prominent member of the Shaheen Bagh protest.

Responding to agitation at a rally, Indian Home Minister Amit Shah said, "Protest as you like but the Citizenship (Amendment) Act [CAA] will not be withdrawn".

The protest continued unabated in the country from mid-December to late March, before being halted by the COVID-19 pandemic.

It was triggered after almost two million people failed to prove their identity as Indians and were stripped of their citizenship in the north-eastern state of Assam under the NRC, which made it mandatory for people to show documentary evidence, such as birth certificates or property papers that showed that their ancestors lived in India before 1971.

The amendment to the citizenship law added fuel to the fire as people were worried that those who would be left out by the NRC would not get the chance to get Indian citizenship, especially Muslims.

The new citizenship law enacted by the Indian parliament would grant citizenship to illegal Hindu, Sikh, Buddhist, Jain, Parsi, and Christian migrants from Afghanistan, Bangladesh, and Pakistan. The law, however, excluded Muslims.