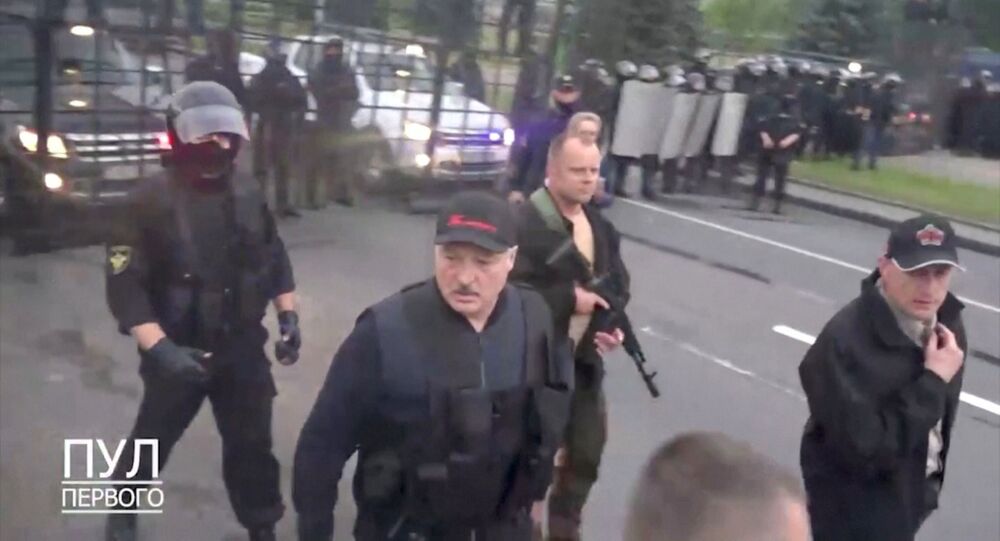 On Sunday evening, Belarusian President Lukashenko arrived at the presidential palace in Minsk by helicopter and was seen holding an assault rifle in his hands.

The Kremlin has refused to comment on the appearance of Belarusian President Alexander Lukashenko and his son with assault rifles near the presidential residence in Minsk on Sunday evening amid mass protests.

"I will not answer your question," Russian presidential spokesman, Dmitry Peskov, said on Monday, in response to the question on whether the Kremlin views the Belarusian president's reaction to the protests as "proportionate".

A video showing Alexander Lukashenko getting out of a helicopter near the presidential palace in Minsk and holding an assault rifle in his hands emerged on Sunday.

He was accompanied by his son Nikolai who was also holding a rifle. Lukashenko approached the security officers who were guarding the presidential palace during mass anti-government protests and thanked them for their service. He also promised them to "get everything sorted out" with the protesters.

© REUTERS / VASILY FEDOSENKO
A woman holds a historical white-red-white flag of Belarus during an opposition demonstration against presidential election results at the Independence Square in Minsk, Belarus August 22, 2020.

Tens of thousands of people gathered in central Minsk on Sunday in what was the fifteenth day of anti-government protests in the country over the results of the August 9 presidential elections. According to the Belarusian Election Committee, incumbent president Lukashenko received over 80% of the votes, while his main opponent, Svetlana Tikhanovskaya, got a bit more than 10%. Opposition supporters insist that the election was rigged and are demanding Lukashenko's resignation. Lukashenko has said that new presidential elections will only be possible after a new constitution is adopted through a referendum.