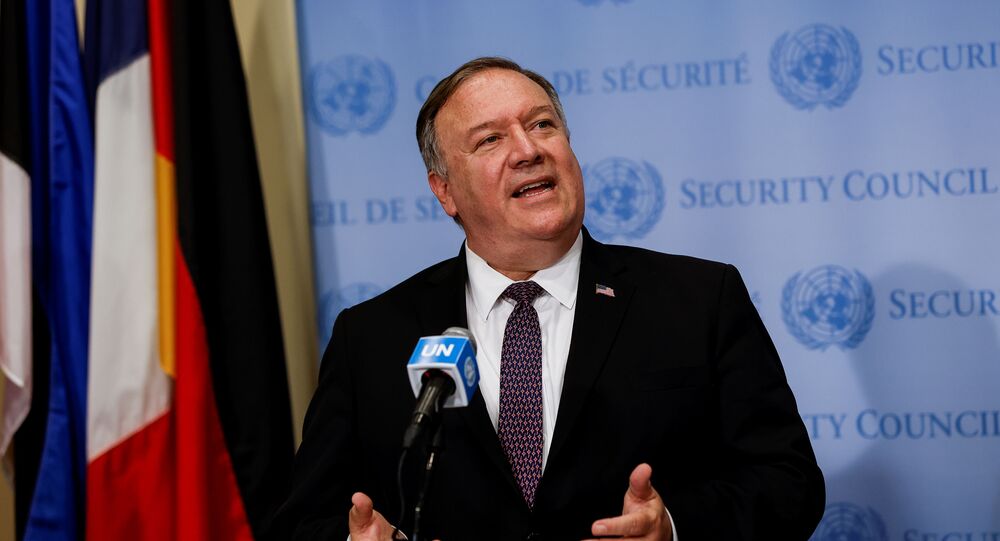 US Will Use Every Tool to Prevent China, Russia From Selling Weapons to Iran, Pompeo Vows

Washington earlier tried to initiate the "snapback" sanctions mechanism in an attempt to prevent the lifting of the embargo on weapons sales to Iran, which expires this autumn. However, the bid has been opposed by European countries, Russia, China, and Iran, which insist that the US lost its right to trigger the mechanism in 2018.

US Secretary of State Mike Pompeo has vowed in an interview with Fox News that Washington will use every tool available at its disposal to prevent China and Russia from "violating" the sanctions imposed on weapons sales to Iran.

Pompeo further expressed disappointment at the actions of its allies in the UN Security Council, who do not support the US intention to initiate the "snapback" sanctions mechanism against Iran. The top diplomat previously threatened to impose sanctions against any country that opposes this aim.

"The world will be a safer place. The Iranians won’t have the chance to have Russian air defences, some Chinese tanks – all of the things that pose risks and instability in the Middle East. The Gulf states are all excited about it. Israel is excited about it", Pompeo stated.

US Looking to Restore All Sanctions on Iran

The "snapback" mechanism was a part of the Iran nuclear deal, also known as the Joint Comprehensive Plan of Action (JCPOA), signed in 2015 by a group of European states, the US, Russia, and China, and was supposed to be triggered should Tehran stop fulfilling its obligations under the accord. The US appealed to the UN Security Council to restore all the lifted sanctions via the "snapback" mechanism, citing Iran's decision to surpass the limitations on nuclear enrichment set by the JCPOA.

© AP Photo / Richard Drew
Russia Will Not Recognize US Notice to UNSC as Sanctions Snapback Against Iran, Envoy to UN Says

This initiative is opposed by the majority of the Security Council. Iran, Russia and China argue that Washington lost its right to trigger the "snapback" sanctions when it withdrew from the JCPOA in May 2018 and imposed unilateral sanctions against Tehran, which actually prompted the country to decide to abandon its obligations. While the move disappointed the remaining signatories, Iranian authorities explained that they did not feel compelled to follow the restrictions since the country had lost the only benefit it had from signing the nuclear deal.