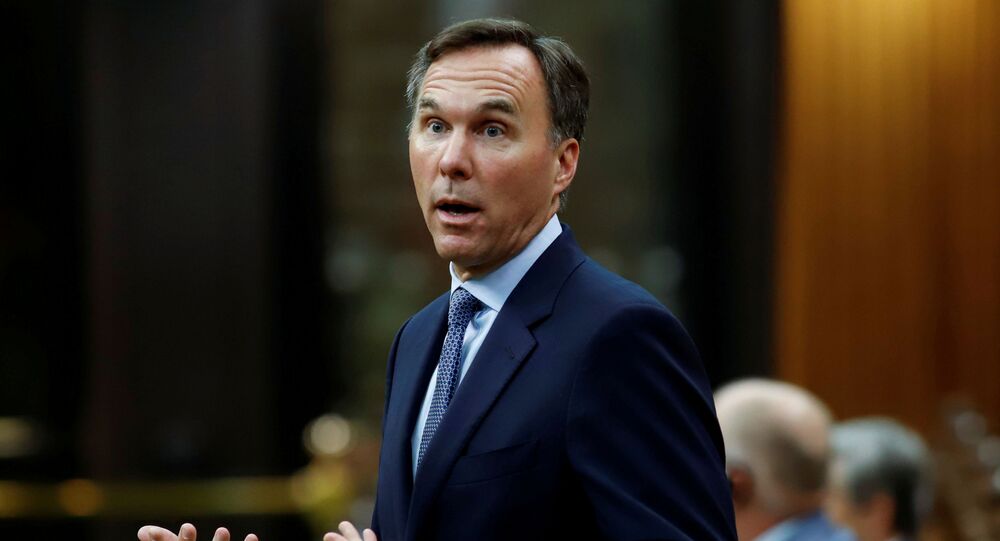 TORONTO (Sputnik) – Canadian Finance Minister Bill Morneau is stepping down from his cabinet position and as a member of parliament for a Toronto riding after weeks of scrutiny for his role in a charity scandal that has plagued the government of Prime Minister Justin Trudeau.

“I will be stepping down as the finance minister and as Member of Parliament for [the riding of] Toronto-Centre”, Morneau told reporters on Monday.

Morneau said that his resignation was motivated by an earlier decision not to run in the next election and that the country needed a finance minister that would oversee the long-term economic recovery in the aftermath of the pandemic-induced downturn.

The now-former finance minister added that he will now enter the race to become the next Secretary-General of the Organization for Economic Co-operation and Development.

In a statement, the prime minister said that he accepted Morneau’s resignation and thanked him for his service.

“Today, I spoke with Bill Morneau and accepted his resignation”, Trudeau said. “I want to thank Bill for everything he has done to improve the quality of life of Canadians and make our country a better and fairer place to live.”

The Canadian opposition, however, maintains that the reported disagreement between the prime minister and the former finance minister is a case of Morneau being deemed the responsible party for the ongoing WE Charity Scandal that has plagued the Trudeau government.

“No one is buying the Liberals’ bogus excuses about a “policy disagreement”. Morneau was Trudeau’s handpicked Finance Minister. They have moved in lockstep for 5 years implementing their disastrous policy agenda”, Conservative Leader Andrew Scheer said via Twitter. “Scapegoating Morneau does not solve the problem. As long as Trudeau is Prime Minister, the corruption will continue.”

From the Liberals' carbon tax, to their tax hikes on small businesses, to their massive deficit spending, Trudeau and Morneau's policies have hurt Canadians.

Scapegoating Morneau does not solve the problem. As long as Trudeau is Prime Minister, the corruption will continue. 3/3

The opposition also says that the dismissal of Canadian Finance Minister Bill Morneau could trigger a new wave of government spending and lead to a higher deficit, the cost of which will be passed down to the public.

"There have been many reports that Trudeau wants to take advantage of the current crisis to push for even more large-scale social programs - national daycare, expanded unemployment insurance, universal basic income, etc. - and green projects. The spending and deficit could therefore still get worse in the short term, especially with the Bank of Canada monetizing the debt", People’s Party of Canada leader Maxime Bernier said.

Trudeau and Morneau have incurred backlash after multiple investigative pieces revealed close ties between their families and the WE Charity, which was awarded a $670-million sole-source contract to administer a government-sponsored student volunteer program.

Morneau has faced increasing criticism following his admission that he accepted expense paid trips from the WE Charity amid a disconcerting fiscal picture resultant from the ongoing novel coronavirus pandemic.

In July, he told the Parliament's Standing Committee on Finance that he reimbursed the company for the trips that he and his family took to participate in the charity's projects in Kenya and Ecuador in 2017. According to the minister, he paid nearly $70,000 in compensation.

The finance minister has also been blasted for the troubling fiscal picture facing Canada amid the ongoing pandemic; the growing federal deficit is set to soar to a record-high $254.19 billion in the 2020-21 fiscal year and last month, Fitch Ratings stripped Canada of its AAA debt rating citing a "deterioration of public finances".

Trudeau and Morneau were both the subjects of a conflict of interest probe into their relationship with the embattled charity by Canada’s Ethics Commissioner. The ethics probe is the third for both officials during their five years in office.

Morneau was elected to the Canadian House of Commons in the November 2015 federal election and had served at the post for almost five years.