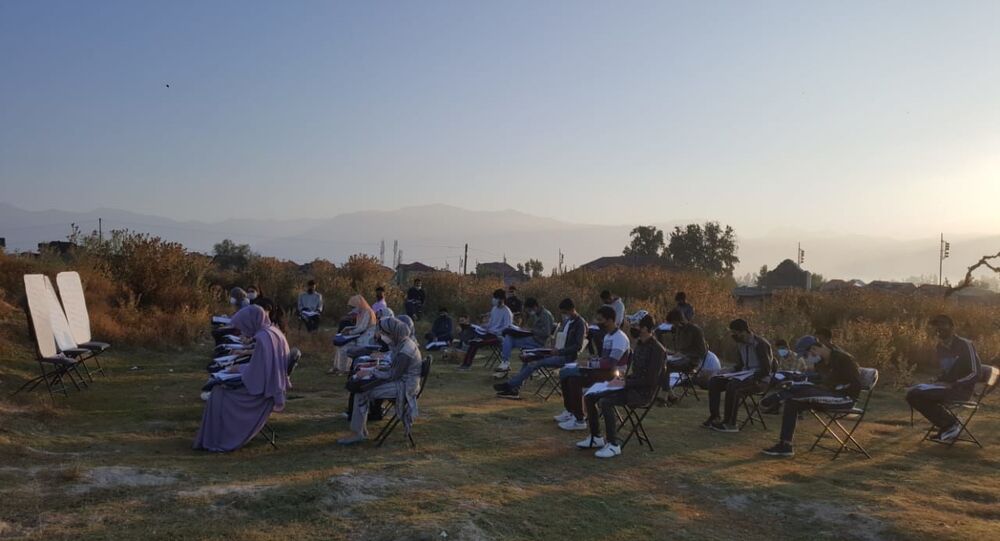 New Delhi (Sputnik): Since the revocation of the semi-autonomous status of the erstwhile state of Jammu and Kashmir last August, schools have been open for only 13 days. Security and the COVID-19-induced closure of schools and colleges have worsened the education for students and the normal course of life for 13.6 million people.

At the crack of dawn, students from far-flung areas of Srinagar city gather at a huge prayer ground with an undeterred desire to study and compensate for the crucial time lost during the restrictions.

Frustrated with months gone without teaching students, Muneer Alam, an engineer-turned-maths teacher in Srinagar city, came up with the solution to start an open-air informal community school when he saw his students in mental trauma and frustration.

“The education system is in shambles here. The impact of political turmoil, curfews and shutdown has fallen badly on students. Most of them are depressed and some in a sort of trauma. It is then I decided I will risk everything for my students”, Alam from Kashmir told Sputnik.

The teacher said he saw a stark difference in the students within 50 days of coaching, with the "hopelessness and helplessness in their eyes gone". The new zeal in their lives and the twinkle in their eyes are the real reward of his social service.

© Sputnik /
Alam has named his centre as Gaash – the Light of Knowledge- the Kashmiri word which means 'light'.

Alam, who started teaching eight students in the lawn of his house in May, shifted to the prayer ground when he saw an overwhelming response from the students and a huge turnout. Alam is now teaching 80 students free of cost in two shifts.

18-year-old Saima Hameeda, one of Alam's students, was hopeless when schools were again shut down in March due to the COVID-19 outbreak after losing out on most of the studies of the 11th grade as curbs were imposed on 5 August 2019, when New Delhi abrogated the temporary special status granted to Jammu and Kashmir.

Despite the worries of parents over the ongoing virus and hostile situation in the militarised zone, Saima now attends the offline classes daily to prepare for senior year exams and achieve her final goal of becoming an engineer.

"Online classes on 2G are painstakingly slow here. I was under anxiety seeing my career stranded for months. We are really thankful to my teachers who have taken the initiative, as at least we are content we are learning, though we do not know what lies ahead under such circumstances", said Saima.

For Alam, it has become a routine to drive seven kilometres away from his house to the prayer ground, an Eidgah in Srinagar mainly used for prayers on Eid, and walk from the parking lot to the ground with three whiteboards, chairs, mats and sanitiser spray.

The students make space for themselves on the unkept ground with tall grasses and bushes. Despite having their heavy notebooks on their laps, the students sit attentively to prepare for their career-defining senior year exams.

Alam has named his centre Gaash – the Light of Knowledge – a Kashmiri word which means "light".

Alam made similar efforts to teach last year in September, when the government in New Delhi revoked the special status of Jammu and Kashmir (guaranteed by Article 370 of the Indian Constitution) and imposed strict restrictions on the movement of the people in anticipation of protests and violence.

“I travelled on foot for some 30-40 kilometres under heavy army deployment. We were not allowed to move then. I wanted to inform my students that I would be starting classes. To my surprise, I got text and threat letters from people protesting the abrogation of Article 370”, said Alam.

Alam felt “sandwiched” between people protesting the New Delhi government's move, issuing threats on one side, and restrictions from security forces and government orders on the other.

“In the first threat they asked me to stop the classes, in second they warned of gunning me down saying I will be responsible for the dire consequences. On the other hand, security forces did not allow students to reach me”.

Alam also has to dodge the encounters between security forces and militants, which often break out in the epicentre of such activities in the downtown area where he stays.

“There have been 5-6 such episodes when I was worried for the safety of students as an encounter broke out in the area in the night. I left early, despite the ongoing operation, to ensure that my students are safe", he said.

Internet for Education is Unstable

High-speed Internet has remained suspended in Jammu and Kashmir for over a year now, even though 2G was allowed in the area in late January, but it is snapped from time to time whenever there are frequent encounters between security forces and militants.

The students complain that they are neither able to catch up with online lectures with the slow-speed 2G Internet nor able to upload assignments on time.

Alam calls the 2G internet as "0G": “I have a mathematical term for it. It is not to 2G for education. It is 0G for us because to teach effectively online you must have high-speed Internet. As a math teacher, you must have a tremendously high speed on either side. And on 2G, you are not able to upload a simple equation”.

© REUTERS / Altaf Hussain
Will Terrorist Killings of Party Workers Undermine India's Ruling BJP Ahead of Elections in Kashmir?
In the latest submission to the Supreme Court over the issue of restoring high-speed Internet in the valley, the central government allowed 3G and 4G Internet services to be restored after 15 August in one district each on a trial basis, fearing that the Internet could be used in terrorist activities.

Alam says that the Internet was never to be relied upon in Kashmir for professional purposes due to frequent outages, adding that his message to the world is that education is an essential service, which should be a priority like food, water, and electricity.

“I have expectations from the government of India. They should recognise the efforts of people in the valley, not for me, but to encourage other people. It takes sweat and blood for us to work in a situation when you do not know from where the bullet will come for you”, he says.