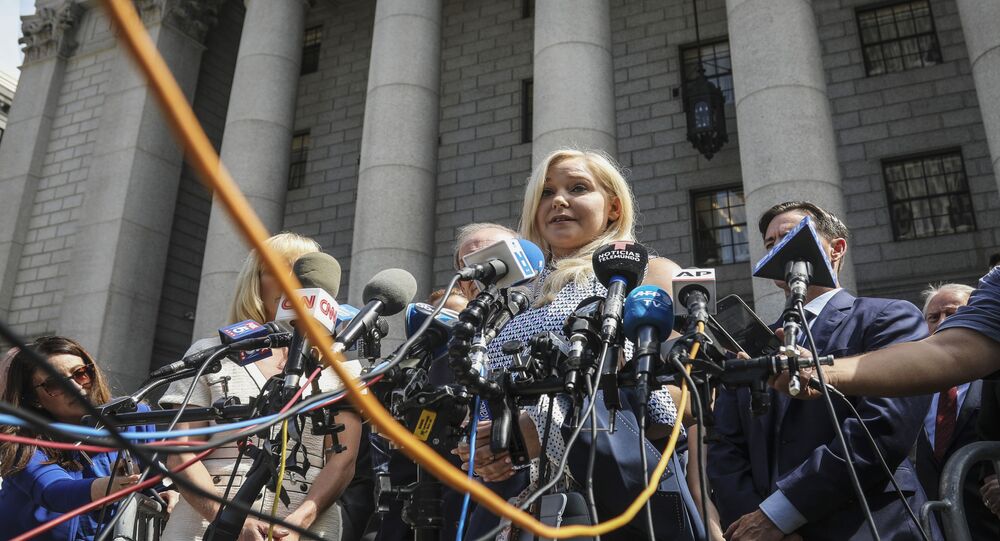 Virginia Giuffre, a US-born Australian national, claims that as a teenager, she was trafficked to London by billionaire Jeffrey Epstein and his girlfriend Ghislaine Maxwell, where she was forced to engage in sexual intercourse with Prince Andrew.

Virginia Giuffre, one of Jeffrey Epstein's alleged victims, has shared an emotional post on Twitter from her hospital bed after undergoing spine surgery. In the tweet, the 36-year-old woman said that her past mental trauma had come back to haunt her after the procedure.

She attached a photo of herself from the ICU, lying in bed with breathing tubes connected to her.

Giuffre has been a key figure in the long-standing probe into the extent of sexual offences perpetrated by late billionaire Jeffrey Epstein and his circle.

© AP Photo / New York State Sex Offender Registry
'I Like Naughty Girls': Giuffre Claims Epstein Got Aroused When She Told Him She Was Abused Before

The woman claims that she was trafficked to London by Epstein and his girlfriend Maxwell, where she was forced to have sex with the billionaire’s friend Prince Andrew.

Her allegations have been laid out in the manuscript of her unpublished book The Billionaire Playboy’s Club, that was released as part of an ongoing probe into Epstein’s ex-girlfriend and alleged accomplice Ghislaine Maxwell, who was arrested in early July.

Epstein reportedly committed suicide in a New York detention centre while awaiting trial in August 2019, for illegal sex acts and perjury for lying to federal investigators in 2016. However, many contend that he was murdered to prevent him from divulging secrets about the libidinous escapades of his rich and powerful associates.