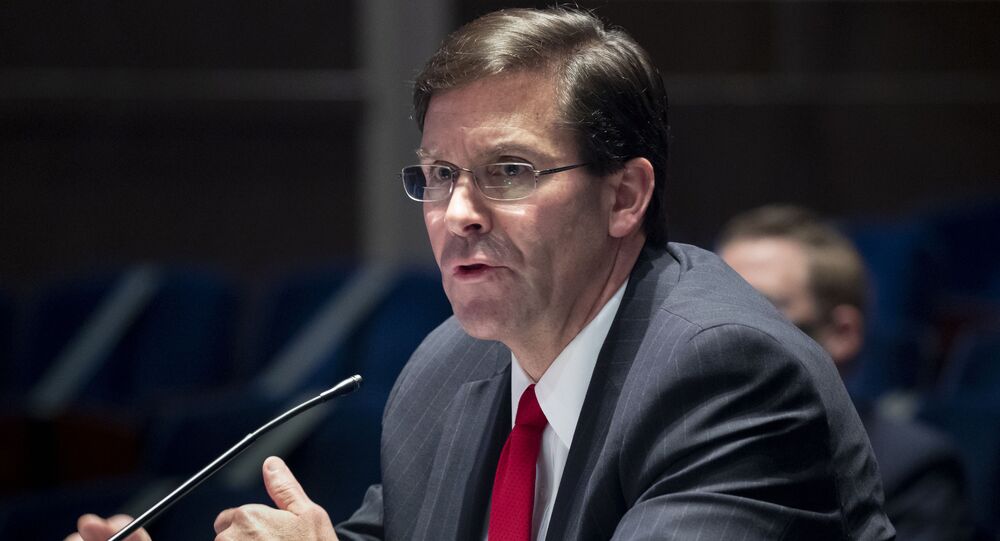 WASHINGTON (Sputnik) - US Secretary of Defense Mark Esper discussed with his Chinese counterpart Wei Fenghe the need for transparency regarding the ongoing novel coronavirus pandemic and Beijing’s activities in the vicinity of Taiwan and the South China Sea, Assistant to the Secretary of Defense Jonathan Hoffman told reporters on Thursday.

"In their discussion, the Secretary called for greater transparency on COVID[-19], expressed concerns about [China’s] destabilising activity in the vicinity of Taiwan and the South China Sea and called on [China] to honour international obligations", Hoffman said.

Hoffman added that the US Defense Secretary relayed to Wei the need for China to abide by international laws, rules and norms.

Relations between the United States and China have significantly deteriorated under the current Trump administration following accusations Beijing engaged in unfair trade practices and made a poor effort to contain the COVID-19 outbreak.

© AP Photo / Pablo Martinez Monsivais
Will China and US Join Efforts to Restore Global Economy?
US President Donald Trump has repeatedly accused the WHO of being biased in favour of China and of having failed to respond immediately to contain the spread of the novel coronavirus. In April, the US leader announced a temporary freeze of the US funding for the WHO and warned that the freeze would become permanent unless the organization committed to major changes within the 30 days.

In late May, Trump announced that Washington was terminating its relationship with the WHO and redirecting funds to other global health needs. The president lamented that Beijing contributes a small amount of money to the WHO as compared to Washington and yet exercises complete control over that organization.

In early July, the US formally notified the UN Secretary-General Antonio Guterres of its withdrawal from WHO effective 6 July 2021. WHO Director-General Tedros Adhanom Ghebreyesus later said that the WHO had not yet received a formal letter from the United States confirming the country's withdrawal.