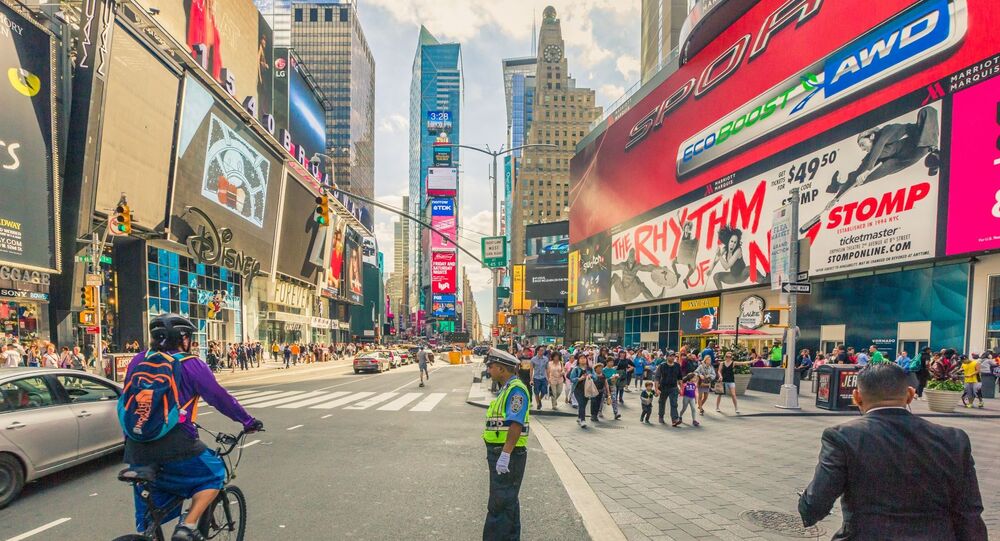 New Delhi (Sputnik): Hindus in India celebrated the foundation stone laying ceremony of the Ram Temple in the city of Ayodhya in Uttar Pradesh on Wednesday. Prime Minister Narendra Modi took part in the groundbreaking ceremony for the Ayodhya Ram Temple. Modi termed the Ram Temple a symbol of the integration of India.

A life-size digital display of the Hindu deity Lord Ram and the Ram Temple has come up on one of the most expensive digital billboards at Times Square in New York on Wednesday to mark the foundation stone laying ceremony of the temple.

​"India has arrived on world arena. This century, this decade belongs to India. It is a proud moment for India and Indians," says Jagdish Sewhani, President of the American India Public Affairs Committee.

It shows how successful Indians are in America that our #RamTemple & tricolour are on the most iconic screen in the world. It is a proud moment for India and Indians: Jagdish Sewhani, President of the American India Public Affairs Committee https://t.co/yitAmVM7yb pic.twitter.com/8miGQ067jW

#Ayodhya finally reaches Times Square even though some radical groups who were against freedom of speech tried to create hurdles. Jagdish Sewhani, President of American India Public Affairs Committee posing with the #RamMandir billboard at Times Square in New York! #JaiShriRam pic.twitter.com/GakWQSNSDD

​The display, which lit up at 10 am, will continue till 10 pm to mark the celebration of the laying of the temple's foundation. Prime Minister Narendra Modi on Wednesday launched the construction of the temple with prayers at the temple site in a grand ceremony.

Earlier, there were claims that Muslim groups in the US had announced that advertising company Branded Cities, which runs the digital advertisement board in Times Square for Nasdaq, “refused to run digital advertisements” for right-wing Hindu groups who had planned to display images of Lord Ram.

Hindus in India celebrated the day by lighting up earthern lamps at their homes in the evening.

It was Deepotsava the whole evening . Satisfaction , Celebration about a dream & struggle yielding fruit ... Proud past , satisfying present & a vision for the future was the feel in everyone around . #JaiSiyaRam #RamMandir pic.twitter.com/1SaxDYnUcy

​The construction of the Ram Temple holds immense importance for Hindus, as it has been claimed that Mughal ruler Babur had erected a mosque by demolishing the temple, which is the birthplace of deity Lord Ram. The mosque was razed in 1992, but the legal dispute between Muslims and Hindus was only resolved by the Supreme Court last year when it announced a verdict in the favour of Hindus.